Explained: What samples brought back by China mission tell us about the Moon

Chang’e-5 landed on an area of the Moon (the ‘far side’) not sampled by the American or Soviet missions nearly 50 years ago, and thus retrieved fragments of the youngest lunar rocks ever brought back for analysis in laboratories on Earth. 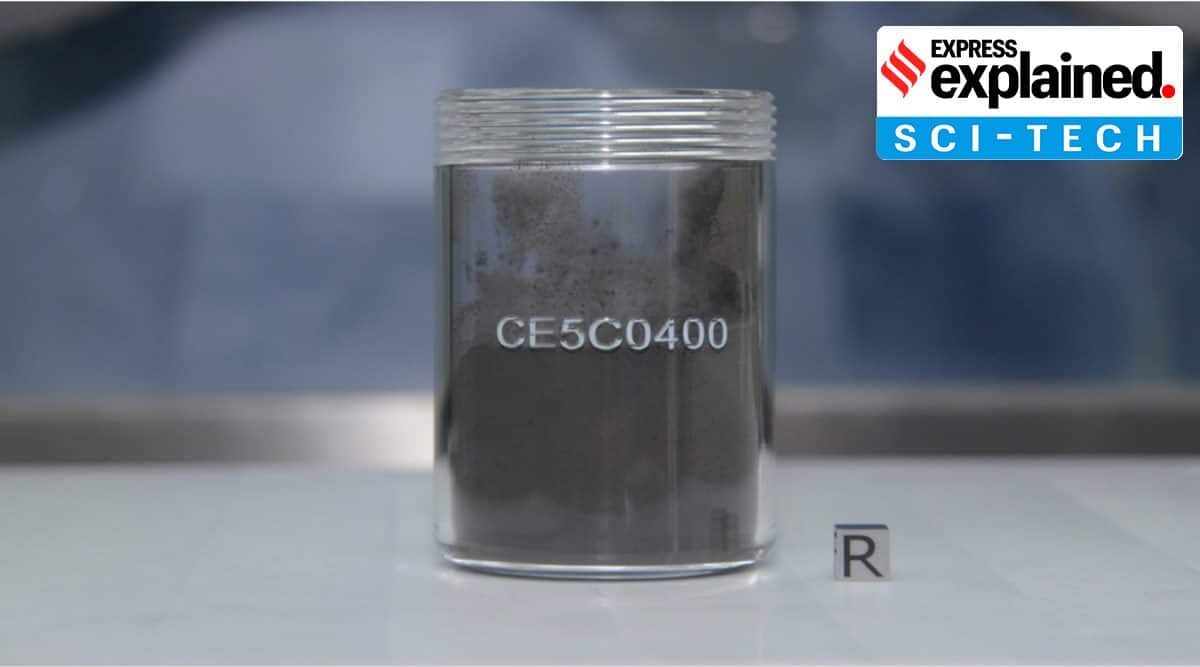 The Chang'e-5 sample ‘CE5C0400’ from the Moon’s surface; it weighs nearly 35 grams and was collected by a robotic arm. (Photo: CNSA/CLEP via Europlanet Society)

On December 16, 2020, China’s Chang’e-5 lunar mission delivered to Earth nearly 2 kg of rocky fragments and dust from the Moon. At the ongoing Europlanet Science Congress (EPSC) 2021 virtual meeting, Yuqi Qian, a PhD student at the China University of Geosciences, presented early-stage findings that use geological mapping to link ‘exotic’ fragments in the collected samples to features near the landing site, the Europlanet Society said in a press release.

Chang’e-5 landed on an area of the Moon (the ‘far side’) not sampled by the American or Soviet missions nearly 50 years ago, and thus retrieved fragments of the youngest lunar rocks ever brought back for analysis in laboratories on Earth. The rocks are also different to those returned decades ago.

THE FINDINGS: According to the Europlanet Society, the study presented by Qian suggests that 90% of the materials collected by Chang’e-5 likely derive from the landing site and its immediate surroundings, which are of a type termed ‘mare basalts’. These volcanic rocks are visible to us as the darker grey areas that spilled over much of the nearside of the Moon as ancient eruptions of lava. Yet 10% percent of the fragments have distinctly different, ‘exotic’ chemical compositions.

WHY IT MATTERS: The distinct 10% fragments may preserve records of other parts of the lunar surface as well as hints of the types of space rocks that have impacted the Moon’s surface. Qian and colleagues from Brown University and the University of Münster have looked at the potential sources of beads of rapidly cooled glassy material. They have traced these glassy droplets to extinct volcanic vents known as ‘Rima Mairan’ and ‘Rima Sharp’. These fragments could give insights into past episodes of energetic, fountain-like volcanic activity on the Moon, the release said.

The team has also looked at the potential sources of impact-related fragments. The young geological age of the rocks at the landing site narrows the search, as only craters with ages less than 2 billion years can be responsible, and these are relatively rare on the side of the Moon that faces Earth. The team has modelled the potential contributions from specific craters: Aristarchus, Kepler, Copernicus, Harding, and Harpalus. Qian’s findings show that Harpalus is a significant contributor of many exotic fragments among Chang’e-5’s sample haul, and these pieces of rock could offer a way to address persisting uncertainty about this crater’s age, the release said.