Simply Put: What next for Brexit?

With the deadline for Britain leaving the EU approaching, Prime Minister May’s proposals have been rejected yet again by Parliament. Amid the uncertainty, a look at various possible courses of events. A pro-Brexit protester holds up a sign outside UK Parliament on March 14. Prime Minister Theresa May’s were voted out in the House. (Reuters)

WITH LESS than two weeks to go for the March 29 scheduled date, the nature of Britain’s exit from the European Union, or Brexit — if it happens at all — remains uncertain as ever. A series of developments over the last one week has left a number of possibilities wide open. Will Britain and the EU be able to renegotiate an extended deadline? Will Britain eventually leave without a deal? Is it possible that British citizens will vote in a fresh referendum, and what would that be about? A look at where things stand, and what could possibly follow:

What has happened on Brexit so far?

In a referendum on Thursday June 23, 2016, those favouring Brexit (Leave) won by 52% to 48% (Remain). The “transition period” is scheduled to begin on March 29 and end on December 31, 2020. In November 2018, the UK and the EU agreed to the terms of the exit, known as the withdrawal agreement. However, the agreement has failed to clear British Parliament, with MPs voting against it twice this year. On January 15, they voted 432-202 to reject the deal. Prime Minister Theresa May renegotiated certain terms with the EU, but on March 12, MPs voted against the agreement again, this time by 391 votes to 242. The following day, the MPs rejected the idea of leaving the EU without a deal — an option called called “No deal”. Then on March 14, they voted 413-202 in favour of Prime Minister May asking the EU for a delay to carry out Brexit. That puts a question mark on whether Brexit will happen on March 29 after all. What is in the deal?

An explainer on the BBC News website lists out various aspects:

PAYMENTS: This relates to payments that the UK makes to the EU budget. As its financial obligations for leaving, the UK has agreed to continue making these payments until the end of the transition period, and the bill is expected to be £39bn. The withdrawal agreement, however, leaves the option of the transition period being extended. If that happens, there will have to be additional payments, to be agreed later.

IRISH BACKSTOP: The backstop is among the most contentious of issues. It is part of the withdrawal agreement, meant to ensure that there is no hard border between the Republic of Ireland (which will remain in the EU) and Northern Ireland (which is part of the UK). The backstop will come into effect if the transition period ends without wider agreements being reached. Under the withdrawal agreement, it would keep Northern Ireland in the EU Customs Union. This has raised concerns about a part of the UK being trapped in the backstop. 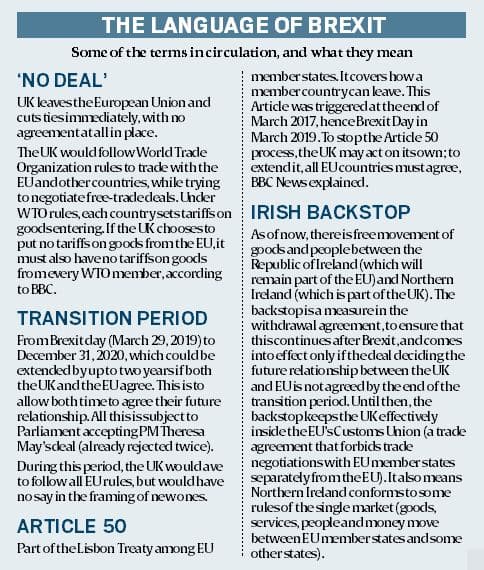 LAWS: As of now, the European Court of Justice has the final say on disputes on matters of EU law. Brexit supporters want the last word to be with a UK court. During the transition, the UK will have to continue following EU rules and abiding by ECJ rulings.

There are a number of possibilities, the first of which is getting the EU to agree for an extension of Article 50 of the Lisbon Treaty (see ‘The Language of Brexit’), which in effect means asking for more time. The request would be taken up at an EU Summit on March 21-22. If Prime Minister May asks for a short extension and all EU member states agree, Brexit can still happen by the schedule. On the other hand, if May asks for a longer extension and all EU members agree, Brexit could be delayed beyond the EU Parliament elections in May (with Britain taking part). If the EU turns down either request, it could lead to a “No deal” Brexit. 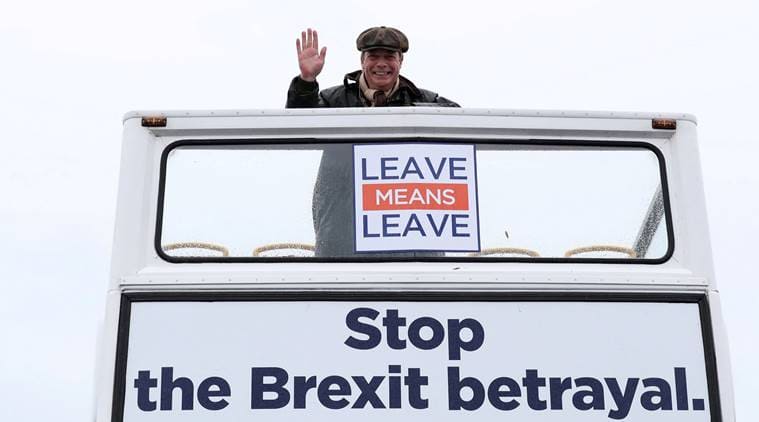 How does the “No deal” option work?

It would be legal for the UK to unilaterally cancel Brexit, without the need for agreement from the other 27 EU countries, the BBC explains, citing an ECJ ruling. However, it is not clear what that process would be.

When will the UK decide whether to ask for a longer or a shorter extension?

The government reportedly plans to hold another vote this week. If the Speaker allows the vote, the PM can present it as a choice between passing the deal with a short Brexit delay or rejecting it and facing a longer extension. If successful, the PM could go to the EU Summit and request the short extension.

What if the request is for a longer extension, and the EU agrees?

The delay would keep open a number of possibilities. For one thing, the prospect of “No deal” would remain, but that would happen at a later date. If the EU agrees to renegotiate the deal, the UK Parliament would still need to clear it. If either of these does not happen, various possibilities (besides “No deal”), are listed out on the BBC News website:

REFERENDUM: When Parliament voted to ask the EU for a delay, it also rejected a fresh referendum. BBC News explains, however, that a referendum is possible, although not likely. It could be a non-binding referendum with the question to be determined. That would subject to Parliament approval, with a new piece of law to make a referendum happen and to determine the rules, the website quoted an BBC News analyst as saying.

PARLIAMENT ELECTION: If an election is held, the PM would hope for a mandate in the newly elected House. If she proposes an election, it will need the approval of two-thirds of the MPs.

NO-CONFIDENCE MOTION: If the government loses such as motion, it will open up new possibilities. It will set off a 14-day countdown. During this period, either the current government or a new one will face a vote of confidence. If either one wins, it takes over. If not, a general election will follow.

If there is an election, what are the political leanings of the Leave and Remain camps, respectively?

Theresa May is a Conservative, with Labour in opposition, but that may not reflect in how voters relate to Brexit. Although economic views have in the past helped predict British political support, Brexit is different, according to ‘The Interpreter’ column in The New York Times. It noted that on this issue, voters’ social views are far more relevant. “People on the libertarian end of the spectrum tended to vote Remain, while those on the authoritarian end tended to vote Leave. The result is that Brexit views slice across people’s party identity. Both parties’ voters and legislators include a mix of Leavers and Remainers. There isn’t a ‘Leave’ party and a ‘Remain’ party,” it said.