Explained: A Bill in Parliament to stop strikes at ordnance factories

Essential Defence Services Bill is aimed at preventing the staff of the government-owned ordnance factories from going on a strike. Is it needed and who does it impact? 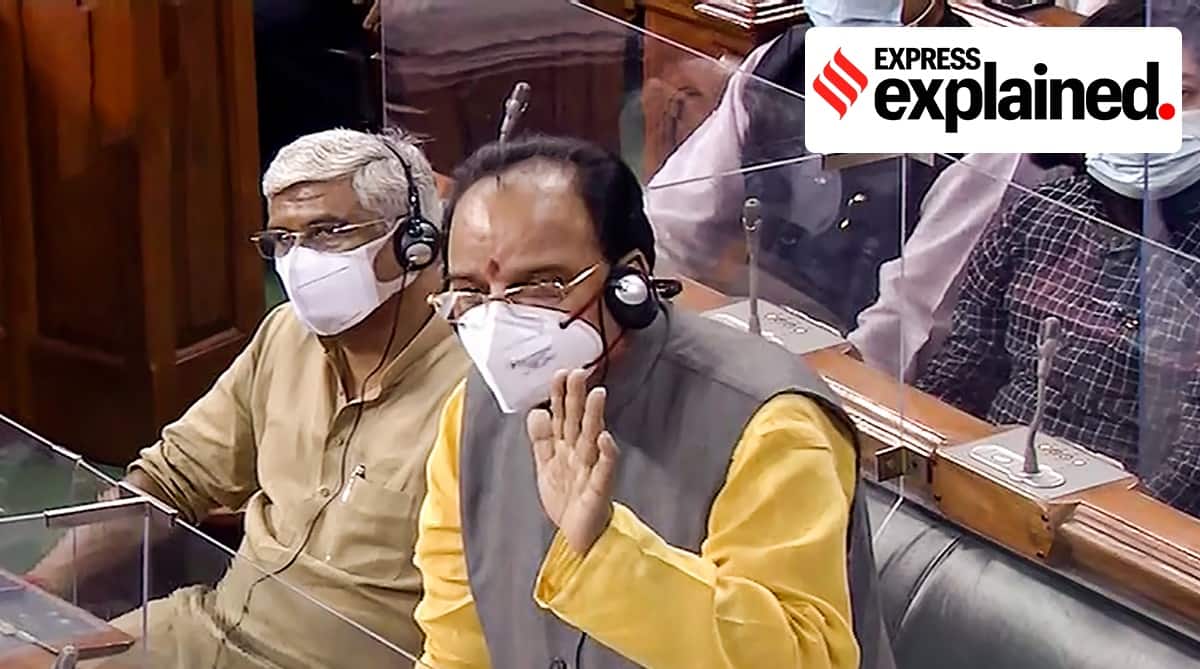 MoS for Defence Ajay Bhatt speaks in the Lok Sabha during the Monsoon Session of Parliament, in New Delhi, Thursday, July 22, 2021. (LSTV/PTI Photo)

Amid the din in Parliament on Thursday over allegations of snooping by the government using the Pegasus spyware, and the three farm bills, Minister of State for Defence Ajay Bhatt introduced the Essential Defence Services Bill in the Lok Sabha on Thursday.

What is the Essential Defence Services Bill?

The Bill introduced on Thursday mentioned that that it is meant to “provide for the maintenance of essential defence services so as to secure the security of nation and the life and property of public at large and for matters connected therewith or incidental thereto”. But in its objectives, the government has stated: “Indian Ordnance Factories is the oldest and largest industrial setup which functions under the Department of Defence Production of the Ministry of Defence. The ordnance factories form an integrated base for indigenous production of defence hardware and equipment, with the primary objective of self reliance in equipping the armed forces with state of the art battlefield equipment.”

Further, it noted that since it is “essential that an uninterrupted supply of ordnance items to the armed forces be maintained for the defence preparedness of the country and the ordnance factories continue to function without any disruptions, especially in view of the prevailing situation on the northern front of the country, it was felt necessary that the Government should have power to meet the emergency created by such attempts and ensure the maintenance of essential defence services in all establishments connected with defence, in public interest or interest of the sovereignty and integrity of India or security of any State or decency or morality”.

What does it allow the government to do?

The Bill empowers the government to declare services mentioned in it as essential defence services “the cessation of work of which would prejudicially affect the production of defence equipment or goods; or the operation or maintenance of any industrial establishment or unit engaged in production of goods or equipment required for any purpose connected with defence; or repair or maintenance of products connected with defence”.

It also prohibits strike and lockouts in “any industrial establishment or unit engaged in essential defence services”.

Why does the government feel its need?

In June the government announced corporatisation of the Ordnance Factory Board, under which the 41 factories ammunition and other equipment to the armed forces will become part of seven government owned corporate entities. The OFB was directly under the Department of Defence Production and worked as an arm of the government. The government has claimed that the move is aimed at improving the efficiency and accountability of these factories.

Announcing the decision on June 16, Defence Minister Rajnath Singh had assured that the interests of the OFB employees will be safeguarded. “I assure that the service conditions of the employees will not be affected by the move”.

The Bill mentioned that there is a threat, though, that the employees of these factories can go on a strike against the decision. “Against the said decision, the recognised federations of the employees gave a notice for an indefinite strike. The conciliation proceedings initiated by the Government at the level of Chief Labour Commissioner failed in the meeting held” on June 15.

For the same purposes, the government had promulgated the Essential Defence Services Ordinance on June 30. The Bill will replace that.

Who will it affect?

It has a direct bearing on around 70,000 employees of the 41 ordnance factories around the country, who are unhappy with the corporatisation of OFB, fearing that it will impact their service and retirement conditions.

Singh had said that even the Cabinet note, through which the decision got the nod, also mentioned that there should be no change in the service condition of the around 70,000 employees of the OFB the defence minister had mentioned earlier.

The employee unions and associations had threatened to go on strike last year as well, when the government had declared that it will start the process towards OFB corporatisation.

If passed it will come into effect retrospectively from June 30, when the ordinance was promulgated.

15,051 children lost either one or both parents to Covid-19 in Maharashtra, 482 orphaned