The report includes information collected in the last nine years by the Forest Department and WTI as a part of the Big Cat Conflict Mitigation Project. It analyses the patterns of attacks, and outlines the circumstances in which these shy animals injure or kill humans. 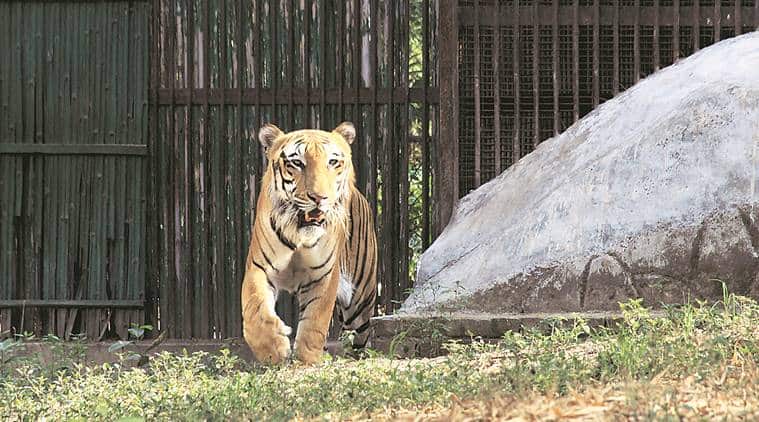 According to the state’s Forest Department, at least six people have died in man-tiger encounters so far this year, and 21 were killed in Pilibhit in 2017, while one tiger was declared a man-eater and subsequently captured. (Express Archive)

Last week, villagers living next to Uttar Pradesh’s Pilibhit Tiger Reserve cornered an adult, male tiger, two-and-a-half kilometres inside the reserve’s core area and bludgeoned it to death before slitting its throat. This was in retaliation for an earlier tiger attack on some villagers, who had entered the forest to collect firewood, that left some injured.

For the Dudhwa and Pilibhit tiger reserves — the last remaining protected habitats for tigers and leopards in UP — this cycle of contesting for space and retaliation has been the script for long. Pilibhit, in particular, is known for the higher rate of human fatalities due to animal attacks. According to the state’s Forest Department, at least six people have died in man-tiger encounters so far this year, and 21 were killed in Pilibhit in 2017, while one tiger was declared a man-eater and subsequently captured.

This has led to a mistaken belief that bloodthirsty tigers in Pilibhit are actively seeking out humans and venturing far out of the forest. However, the numbers tell a different tale.

According to a report published last week by the UP Forest Department and Wildlife Trust of India (WTI), Living with the Wild: Mitigating Conflict between Humans and Big Cat Species in Uttar Pradesh, as many as 136 cases were reported of big cats killing or injuring people between 2000 and 2013 — 73 cases involved tigers and 63 were attributed to leopard attacks. On an average, 12 cases were reported every year between 2002 and 2013. However, the incidence fell to four cases each year between 2013 and 2015.

The report includes information collected in the last nine years by the Forest Department and WTI as a part of the Big Cat Conflict Mitigation Project. It analyses the patterns of attacks, and outlines the circumstances in which these shy animals injure or kill humans.

A key finding was that over half of the tiger attacks (54.79%) took place inside the forest or in the fringe areas, followed by attacks in farmlands (31.5%), particularly sugarcane fields, which occupy about a third of the district’s sown area. A closer look reveals that 81.6% of the victims are males, and about 38.6% had ventured into the forest to collect firewood, while 32.9% were working in their fields. Nearly 23.3% of the victims were attacked while defecating near the forest.

The fact that most attacks (90.6%) took place during the day, between 9am and 4pm — hours when the forest-dependent communities are most active — suggest that tigers aren’t actively seeking out human beings as prey. “Most human-tiger encounters are caused by humans accidentally disturbing tigers that are resting in fields or fringe forests areas during the day,” the report notes.

Human beings are not a part of the tigers’ food chain. Therefore, the attacks take place because the forest and fields are not separated by a buffer zone. Herbivores, which are the natural prey of big cats, enter these crop fields in search of food. This is when tigers enter the farmland. The situation is further complicated by sugar cane fields — the crop provides ample cover for big cats, often allowing them to inhabit the space undisturbed for months.

While the study notes that the victims of tiger attacks are mostly adult males who “venture[d] into forests to a greater degree”, leopards are “more prone to attacking children below 10 years of age” (78.6%). Most of these attacks are concentrated in the adjacent villages (92.1%) — nearly half of them take place inside or near homes (47.6%), and the rest in the peripheral areas (15.87%) and fields (28.6%).

The largest proportion of leopard attacks took place when the victims, mostly children, were sleeping, standing idle, doing odd jobs or defecating (77.8%); only 22.2% of the attacks took place while they were engaged in the field.
As tigers cohabit with leopards, the latter has to compete with its larger and more powerful cousin for the limited prey that is available. Being opportunistic predators, leopards often prey on livestock and dogs, but most of these incidents remain undetected. However, these attacks, the report states, are largely accidental.

The lead author of the report, Dr Mayukh Chatterjee, explained that the spotted cats are known to avoid large prey, which could injure it. “The fact that most of the victims here are children is the key. For instance, in 2016, there was a case when a leopard went in to kill a calf, but it ran away after an alarm was raised. However, there was a child standing right there, next to a tubewell; it attacked the child instead.”

The report also suggests the changes in human behaviour that could help reduce the number of attacks — such as not entering forests alone, not leaving children unattended, and building toilets at home. A more long-term measure is the introduction of mechanical harvesters for sugar cane, “a solution that can greatly reduce attacks on humans during harvesting” of the crop.

However, Chatterjee admits that the “First thing that will happen with the introduction of harvesters is people will lose their jobs. But in such a scenario, there is a need to find a middle ground.”

The search for a middle ground has proved elusive over the years. Successful conservation efforts have not only led to a spike in the population of big cats, but also in the number of conflict cases.

Data suggest a spike in conflict between 2008 and 2009. According to available records, a similar spurt is currently underway, with 44 cases of conflict recorded since 2013, most incidents taking place in the preceding two years. “Neither spikes nor lows in the rate of conflict cases per year are abnormal since they are dependent on a number of factors including rainfall and availability of prey to big cat population. The point is that the state has to be prepared for both eventualities,” Chatterjee argued.