Lee, an 18-time world champion, was grim and ashen after the game, saying he was “speechless”. The remaining games run until Tuesday. 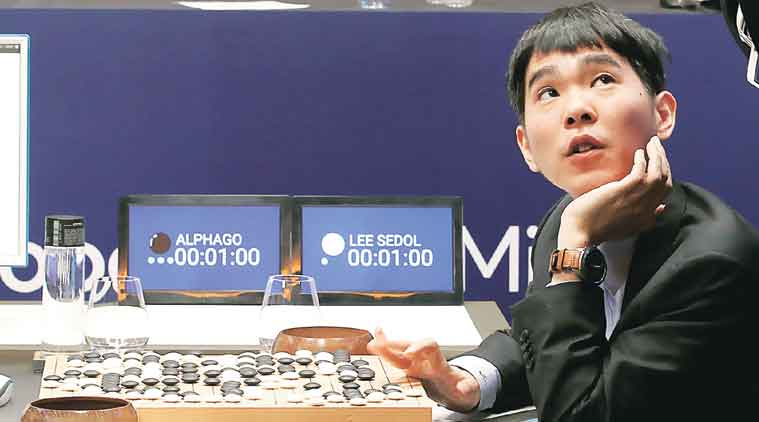 What is the state of play?

AlphaGo, Google’s Artificial Intelligence programme, on Thursday scored its second straight win over Go world champion Lee Seedol, putting the computer within a game of winning the ongoing 5-game human-machine face-off in Seoul. Lee, an 18-time world champion, was grim and ashen after the game, saying he was “speechless”. The remaining games run until Tuesday.

What’s the game of Go?

Go, a game the Chinese invented 3,000 years ago, is called weiqi in China, igo in Japan and baduk in Korea. It is played on board of 19×19 grid squares and black and white stones, with players trying to capture more than 50% of the board by surrounding vacant areas with stones. There are more than 40 million Go players worldwide. South Korea has dedicated TV channels showing Go matches and teaching Go strategy all day. Over 60 million people watched the first Seedol-AlphaGo game online in China alone, and over 100 million globally.

Go presents a special challenge for computers to learn. Unlike chess, which is much more logical, Go is seen as intuitive, something that computers can’t master. The ‘brute force’ style of the Deep Blue’s chess programme does not work for Go because the search tree of moves is just too enormous. According to Google DeepMind’s CEO Demis Hassabis, there are more configurations in the Go game than there are atoms in the universe.

How does AlphaGo work?

Using two deep neural networks (artificial networks inspired by biological neural networks) to mimic the moves of expert players of Go. DeepMind has shown it millions of Go positions and moves from human-played games. The first neural network is called the ‘policy network’, the other, ‘Valley network’. AlphaGo concentrates on a couple of promising moves in the beginning via the policy network; the valley network then reduces the depth of the search, and instead of going all the way to the end of the game, looks at a more reasonable number, like say, 20 moves.

Why are the results significant?

AlphaGo’s wins mark a huge step in the future of how AI will evolve. Experts had thought it would take 10 more years before a computer could beat humans at Go, and Hassabis compared the first win to the moon landing. Hyperbole aside, the results, which have shaken the Go-playing world, are a landmark in the development of AI. Go is probably the most creative game ever, and since computers mastered chess in 1997, it is the only board game left that machines are yet to conquer.