Was it illegal for Himanta and Sadhguru to enter Kaziranga at night? Strictly speaking, no

It depends on the chief wildlife warden, who frames the necessary rules under the Wildlife Act. But there are good reasons why night safaris are generally not allowed in India. 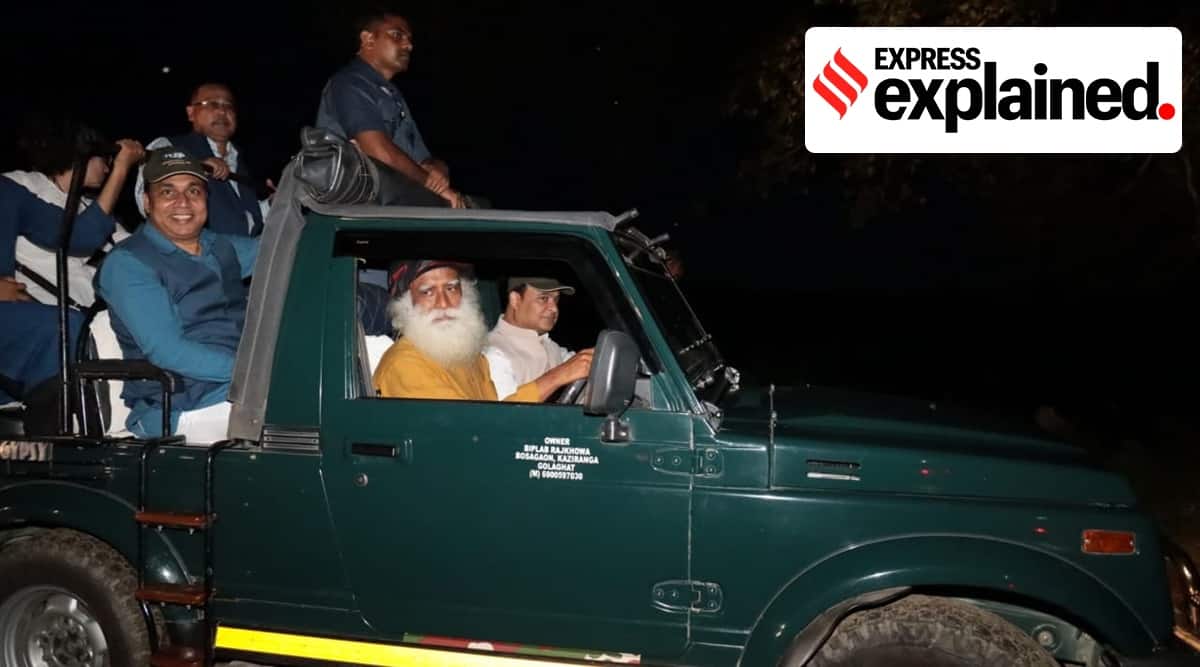 Facing flak for driving inside Kaziranga National Park with Sadhguru Jaggi Vasudev after sunset, Assam Chief Minister Himanta Biswa Sarma on Monday said that night safari in wildlife sanctuaries was in fashion around the world, and that no law in the country, including those for the protection of wildlife, prohibits it.

Is the chief minister right?

He is right, and wrong.

In India, entry into forests is governed by two laws — The Indian Forest Act, 1927, and The Wildlife Protection Act, 1972. The first applies to all reserve forests and bars trespassing. Everyone other than people who live in villages inside reserve forests, needs permission from the divisional forest officer concerned for entering these forests for any purpose.

The Wildlife Protection Act empowers the Chief Wildlife Warden of a state to frame laws for tourists entering Protected Areas — sanctuaries and national parks. Under the same Act, the National Tiger Conservation Authority (NTCA) has the powers to set rules for tiger reserves. Kaziranga National Park is also a tiger reserve.

While a chief wildlife warden must act “with the previous approval of the State Government” concerned, no rule once set by the warden can be violated by anyone, including superior officers or executives, such as the chief minister.

Of course, a chief minister can direct the chief wildlife warden of the state to modify or make certain rules. But any violation of a standing rule will be a violation of — and invite penalty under — The Wildlife Protection Act.

What is the law currently in Kaziranga?

Like most national parks and tiger reserves of India, Kaziranga does not allow entry after sunset, barring forest staff. It remains unclear if that rule has been modified, or the chief minister’s entourage was given prior permission by the chief wildlife warden.

In July this year, the NTCA asked Madhya Pradesh to stop night safaris that were started last year in the buffer zones of the Kanha, Bandhavgarh, and Pench tiger reserves on the ground that such activities disturbed the wildlife in the park. The state has requested the NTCA to reconsider, and allow night safaris to continue in the three reserves.

In 2010, the Karnataka High Court allowed the state government to conduct night safari in an area of 50 hectares of Bannerghatta National Park after it was assured that the forest department would take adequate security and safety measures for both wildlife and tourists.

What is the policy in wildlife parks around the world?

While the scope for legally permitted night safaris inside sanctuaries and national parks is limited in India, night game drives are routine across Africa in the private concessions of Botswana, South Africa, Tanzania, Kenya, Zimbabwe, Namibia, and Zambia etc.

So why are night safaris generally not encouraged in India?

India does not have private forests where tour promoters can do as they like. But the practical reason why night safaris are not encouraged in the country has to do with the topography.

In the African savanna, lack of vegetation reduces the chances of surprise encounters with wild animals, and tourists generally get a good 360-degree view to put hand spotlights and cameras to good use at night. In India by contrast, most forests present dense tropical vegetation where sighting wildlife is not easy even during the day.

Anyone who has driven along dark roads would know how our pupils adjust to the light ahead of the vehicle, coming from its headlamps. While driving on a forest track overhung by vegetation, this makes spotting animals extremely difficult on both sides of the track even when they are very close. This can cause accidents and put both tourists and animals at risk.

Worse, a wild animal that is momentarily blinded by direct light from an approaching vehicle can react unpredictably. It is one thing to marvel at a hare or two caught in the glare, quite another to negotiate a bigger animal that is either stunned in the middle of a dirt track or is making a blind dash.

Foresters, who travel almost daily through forests at night, say they take extra care to spot animals approaching laterally or to avoid bumping into ones waiting by the wayside. While foresters have a job to do, such risks are not worth taking for tourism revenues, or a few prize photos.

What is the upshot, then?

While wildlife may not mind the passing of an odd pair of VIP headlamps, people in positions of power bending the rules can often set the stage for new normals. While the government has the powers, allowing night drives is likely to bring in crowds of safari vehicles that one is accustomed to witnessing in the daytime in most of our reserves.

Beyond the balance of safety and rewards, many believe there is little justification for bringing vehicular noise and light in the wilderness after sunset, when most of the wild come into their element.

Pilot’s right-hand man to detractor, the arc of a Gehlot loyalist’s journey