Glacial lake burst or avalanche… what caused the Uttarakhand disaster?

The breach can be caused by several reasons — in this particular case, for instance, an avalanche was reported in the region two days ago. 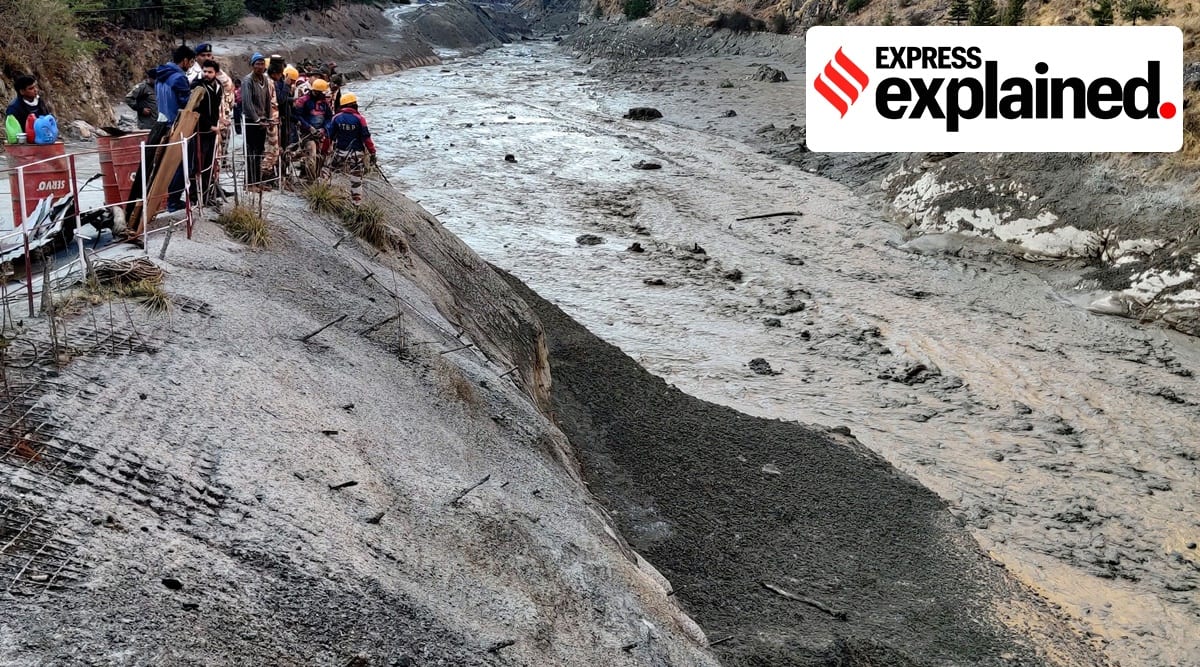 Members of Indo-Tibetan Border Police (ITBP) search for survivors after a Himalayan glacier broke and swept away a small hydroelectric dam, in Chormi village in Tapovan in Uttarakhand (Reuters)

A glacial lake burst, a cloud burst or an avalanche, the impact of climate change or “development” — scientists are not sure what triggered the sudden surge of water near Chamoli in Uttarakhand Sunday morning that briefly raised fears of a repeat of the 2013 disaster in the state.

By evening, the prospect of largescale flooding and destruction had receded. And, as scientists prepared to travel to the site in the high mountains north of Chamoli to ascertain the cause of the incident, the scenario being most talked about was what glaciologists like to call a GLOF, or glacial lake outburst flood. It is a reference to flooding caused downstream due to a breach in a glacial lake.

Retreating glaciers, like several in the Himalayas, usually result in the formation of lakes at their tips, called proglacial lakes, often bound only by sediments and boulders. If the boundaries of these lakes are breached, it can lead to large amounts of water rushing down to nearby streams and rivers, gathering momentum on the way by picking up sediments, rocks and other material, and resulting in flooding downstream.

GLOF events are not unusual, but their impact depends on the size of the proglacial lake that burst, and location. The breach can be caused by several reasons — in this particular case, for instance, an avalanche was reported in the region two days ago.

But while GLOF is being considered to be the most likely trigger for Sunday’s event, there are questions surrounding this possibility. “We don’t know of any big glacial lakes in this region. An avalanche is quite common, and there could have been one, but an avalanche on its own would not result in an increase in the flow of water in the river. The water has to come from a source, and as of now, we do not know what this source is,” said Professor H C Nainwal, a glaciologist at the Hemwati Nandan Bahuguna Garhwal University in Srinagar, Uttarakhand.

“We would have to visit the area to find out what exactly happened. Till then, we can only speculate,” he said.

Argha Banerjee, a glaciologist who works at the Indian Institute of Science Education and Research (IISER), Pune, said it was possible that a glacier lake was present in the area but not known to scientists. As of now, the incident does not seem to have any direct linkage with construction-related activities, or the presence of big dams, but climate change as a factor is not something that can be ignored.

“There are hundreds of such lakes all over the place. We know about many of them, but it is possible that there is one that we do not know about. After today’s event, I started looking at the satellite images, and I couldn’t find any glacial lake in that area. But maybe, if we look at higher resolution satellite images, we would find one,” Banerjee said, adding that there are also instances of lakes forming inside the glaciers, which cannot be detected in satellite images.

“But if there are indeed no glacial lakes in that area, then Sunday’s event would seem to be a bit of a surprise,” he said.

The surprise is also because of timing — a possible reason for the sudden rush of water, like a cloudburst, is not expected at this time of the year. “Cloudburst would be a rare event during this time of the year. It does look like a GLOF event right now,” said Professor A P Dimri from the School of Environmental Sciences at Jawaharlal Nehru University.

But there are other possibilities, as Banerjee suggested.

“It is possible that an avalanche or a landslide created an obstruction in the flow of the river or streams in the upper mountains, resulting in a makeshift dam-like situation. When the pressure of the flowing water became large, the dam probably gave away, leading to a sudden gush of water. These are just the possible scenarios. We would know the exact reason only after reaching the site. It might take a day or two,” Banerjee said.

The Dehradun-based Wadia Institute of Himalayan Geology is sending two teams of scientists to the area Monday to study the possible cause of Sunday’s event, said director Kalachand Sain.

Then there are also issues to consider, like climate change or disproportionate construction in a fragile ecosystem, which were supposed to have contributed significantly to the 2013 disaster as well.

As of now, the incident does not seem to have any direct linkage with construction-related activities, or the presence of big dams, but climate change as a factor is not something that can be ignored, particularly in the formation of proglacial lakes. A majority of the glaciers in the Himalayas are known to be receding, all leading to the formation of several proglacial lakes.

ITBP soldiers rejoice as a man is rescued from the Tapovan tunnel in Uttarakhand Sunday. (Photo courtesy: ITBP)

What scientists are almost certain of is that the incident was not a result of any glacier ‘breaking off’. In fact, glaciers are not known to break in a manner that ice-sheets in the polar regions do. Some chunks of snow from near the tip of the glacier can indeed slide down, but they do not result in huge amounts of water like those seen in incidents like these.

Dumped or declared ‘not traceable’ — files take years to be approved