ExplainSpeaking: From Uttar Pradesh to Manipur, how per capita incomes have grown in the 5 poll-bound states Migrant labourers in Uttar Pradesh start to leave for Delhi after lockdown restrictions were lifted in August 2020. (Express photo/Praveen Khanna)

Last week, the Reserve Bank of India released the “Handbook of Statistics on the Indian Economy, 2020-21”. This is an annual publication and contains detailed historical data on a variety of parameters not just for India as a whole but also for the individual states. On the political front, past few months and weeks have seen heightened activity in the states that are bound for Assembly elections next year. Already three states — Uttarakhand, Gujarat and Punjab have seen the ruling party change its Chief Minister in a bid to retain power. Can the RBI’s handbook throw some light on how the poll-bound states have performed? Indeed it can.

A key variable contained in the RBI’s handbook is the “per capita Net State Domestic Product”. In simple terms, this variable can be used as a proxy for the per capita income in a state. It is, thus, a quick way to ascertain the economic well-being of an average resident in a particular state. It is crucial to note that several academic studies — both in India and elsewhere — have found a strong link between economic indicators such as per capita income and electoral performance. Of course, economic performance isn’t the sole determinant of electoral outcomes.

For this analysis, we shall limit ourselves to the five states — Uttar Pradesh, Uttarakhand, Punjab, Goa and Manipur — that go to polls in March 2022 because, by the time the other two states — Gujarat and Himachal Pradesh — go to polls in November-December 2022, the RBI would have updated the current handbook.

There are three main questions that are worth asking when we look at the per capita NSDP data.

One, what is the absolute level in each of the five states, and how does the income of an average resident of a particular state compare with the national average? 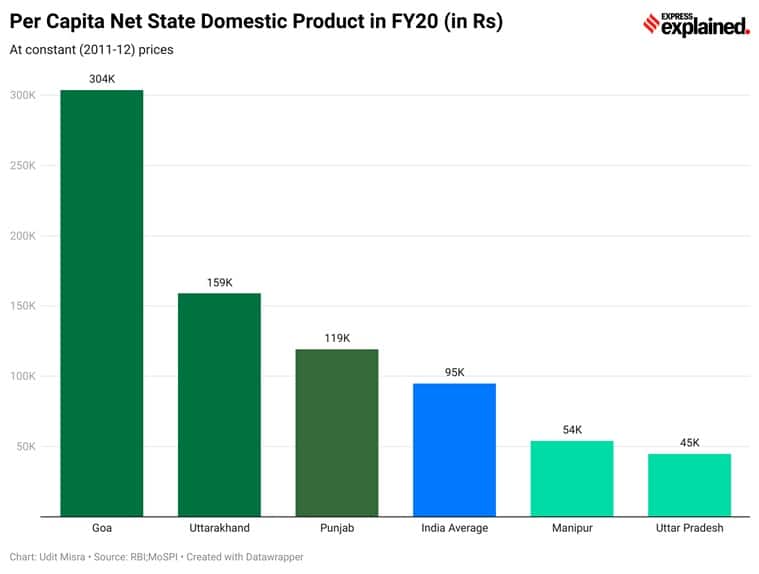 Per capita net state domestic product in FY20 (in Rs)

But state elections are state-level matters and it is unlikely that either UP’s or Goa’s election will be affected by the vast variance — almost 7 times — between the per capita income levels of Goa and UP.

What is more likely to matter is the growth rate in per capita incomes in the five years leading up to the elections. This is the third big question.

In this regard, the chart below provides a picture of how things may look to voters on the election eve. This chart plots the (compounded annual) growth rates (or CAGR) of real per capita income for each of the five states as well as the national average for three time periods.

The “Blue” bar maps the annual growth rate between 2012-13 (FY13) and 2016-17 (FY17). This five-year period marks the tenure of the previous government in each state. For example, in UP, it refers to the term of Samajwadi Party while in Punjab it indicates the growth rate during Shiromani Akali Dal’s rule. How per capita incomes grew in the 5 poll-bound states

The “Maroon” bar refers to the growth rate during the first three years of the current term — FY18 to FY20. This is a crucial number since this growth rate refers to the pre-Covid period. In FY21, thanks to the Covid disruption, all economies — national and state — suffered sharp contraction. So much so, that the best that FY22 can achieve is to regain the absolute levels of per capita income that were last seen at the end of FY20.

The “Orange” bar is a forecast of the growth rate in the current five-year term. It is based on the assumption that the absolute level of per capita income will revert to the pre-Covid level (FY20) by the end of FY22.

Here are the state-wise takeaways from the chart above

UTTAR PRADESH: Even though it ranks pretty low in per capita income terms, as of FY20, UP’s economy was one of the biggest among all states in the country. The data shows that per capita NSDP grew at just 2.99% during the first three years (FY18 to FY20) of the BJP rule. This is not only lower than the national average (4.6%) over the same period but also much lower than the 5% rate registered during the Samajwadi Party rule between FY13 and FY 17.

What is worse still is that if one takes Covid into account, by the end of FY21, UP’s per capita NSDP levels fell sharply, resulting in an annual growth rate of just 0.1% for the first four years of the BJP rule.

If we assume that all the contraction in per capita incomes in FY21 will be recovered in FY22, it would still result in dragging down the annual growth rate of per capita income to just 1.8% for the full five-year term from FY18 to FY22. This growth rate will be significantly lower than the national average of 2.7% for the same five years.

For this to happen, UP’s per capita income would have to grow at an annual rate of over 22% (assuming the national per capita income grows at just 5% each year) between FY23 and FY27 — a far cry from the 2.9% annual rate that the state registered in the three years before the Covid disruption.

PUNJAB: In the first three years of its term before the impact of Covid, the Congress government saw per capita incomes grow by 4% each year. This was not only a shade lower than the 4.3% annual growth rate under the SAD-BJP government during Fy13 and FY17 but also lower than the national average rate of 4.6% during this period.

Thanks to Covid, the Congress government is likely to end with an annual growth rate of just 2.4% for its five-year term — again a shade lower than the national average (2.7%).

A labourer quenches his thirst at Grain Market in Patiala. (Express photo/Harmeet Sodhi)

GOA: Of all the states being considered here, Goa has the highest per capita income. What’s more, it has had a BJP government since the start of FY13. However, as the almost non-existent bars for Goa show, the per capita incomes had actually contracted between FY18 and FY20. It is quite likely that in FY21, income levels would have fallen further; as of now, the RBI did not have the FY21 data.

It is quite likely that even at the end of FY22, per capita incomes in Goa will be lower than what they were in FY18. This contraction, or at the very best, anaemic growth will come at the back of per capita incomes growing by just 3.4% each year during Fy13 and FY17.

UTTARAKHAND: Even though this state (which was earlier part of the undivided UP) has had three Chief Ministers in the last four years of BJP rule and five CMs in the last nine years, it has registered an above-average growth in per capita income. Under the Congress rule between Fy13 and FY17, the growth rate was 6.7% — far above the national average. In the first three years of the current term — that is, in the pre-Covid phase — per capita incomes have grown in sync with the national average.

What’s more, even after the Covid impact, the BJP government rule between Fy18 and FY22 is likely to see per capita incomes growth at an annual rate that is just a shade higher than the national average.

MANIPUR: In the pre-Covid phase — FY18 to FY20 — the BJP government managed to raise per capita incomes at 4.6% each year. This was not only in sync with the national average but, more importantly, significantly much higher than the 3.5% annual growth rate achieved during FY13 and FY17 when Congress was in power.

Of course, Covid has dented per capita income levels but the deceleration in growth rate is likely to be in sync with the national average between FY18 and FY22.

Stay safe and share your views and queries at udit.misra@expressindia.com