Tussle in Kerala: Can Governor Khan dismiss a state minister?

The central leadership of the CPI-M, which leads the Left Democratic Front (LDF) government, said the Constitution does not give the Governor “dictatorial powers”, and Khan’s “political bias” against the government had been “exposed”. 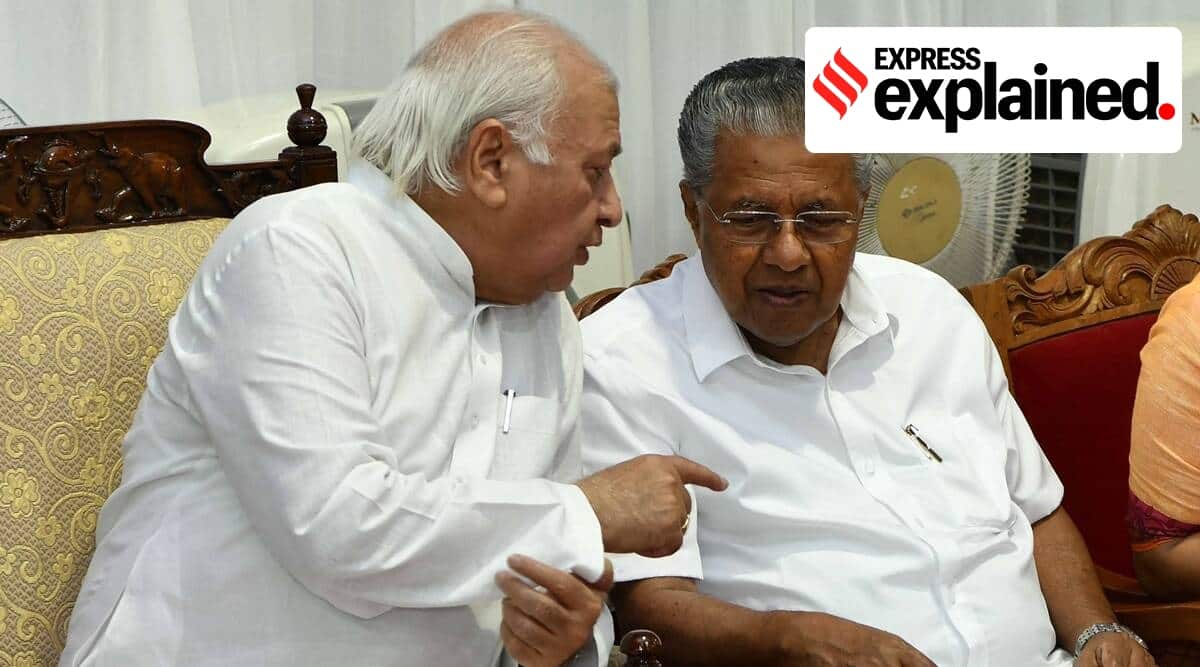 Kerala Governor Arif Mohammed Khan, who is locked in a standoff with the elected government on a range of issues including appointments to the state-run Kerala University, on Monday threatened to sack ministers who “lowered the dignity” of his office.

A statement on Khan’s official Twitter handle said: “The CM and Council of Ministers have every right to advise the Governor. But statements of individual ministers that lower the dignity of the office of the Governor, can invite action including withdrawal of pleasure.”

Hon’ble Governor Shri Arif Mohammed Khan said:“The CM and Council of Ministers have every right to advise Governor.But statements of individual ministers that lower the dignity of the office of the Governor,can invite action including withdrawal of pleasure”:PRO,KeralaRajBhavan

The central leadership of the CPI-M, which leads the Left Democratic Front (LDF) government, said the Constitution does not give the Governor “dictatorial powers”, and Khan’s “political bias” against the government had been “exposed”.

There has been no occasion so far of a Governor unilaterally removing a minister from the government.

What role does the Governor play in the parliamentary system?

The position, role, powers, and conditions of office of the Governor are described in Articles 153-161 of the Constitution. The position of Governor is similar to that of the President at the Union. He is at the head of the state’s executive power, and barring some matters, acts on the advice of the council of ministers, which is responsible, in accordance with the parliamentary system, to the state legislature.

The Governor is appointed by the President (on the advice of the central government) and, therefore, acts as the vital link between the Union and the state governments. The post was envisaged as being apolitical; however, the role of Governors has been a contentious issue in Centre-state relations for decades. The Governor enjoys certain powers such as giving or withholding assent to a Bill passed by the state legislature or determining the time needed for a party to prove its majority — or which party must be called first to do so, generally after in a hung Assembly — which have been weaponised by successive central governments against the political opposition.

Article 164(1) says state “Ministers shall hold office during the pleasure of the Governor”. Does this mean the Governor can sack a minister?

In Shamsher Singh & Anr vs State Of Punjab (1974), a seven-judge Constitution Bench of the Supreme Court said: “We declare the law of this branch of our Constitution to be that the President and Governor, custodians of all executive and other powers under various Articles, shall, by virtue of these provisions, exercise their formal constitutional powers only upon and in accordance with the advice of their Ministers save in a few well known exceptional situations.”

These situations could arise if the Prime Minister or Chief Minister cease to command majority in the House, the government loses majority but refuses to quit office, and for “the dissolution of the House where an appeal to the country is necessitous”. But even in the third scenario, the Head of State (President or Governor) “should avoid getting involved in politics and must be advised by his Prime Minister (Chief Minister) who will eventually take the responsibility for the step,” the court ruled.

In Nabam Rebia And Etc. vs Deputy Speaker And Ors (2016) the Supreme Court cited the observations of B R Ambedkar: “The Governor under the Constitution has no function which he can discharge by himself; no functions at all. While he has no functions, he has certain duties to perform, and I think the House will do well to bear in mind this distinction.”

Also Read |Governors as chancellors: The points of conflict

So what does the “pleasure” of the Governor mean?

Also, he said, “Without the advice of the Chief Minister, a Governor can neither appoint nor dismiss a minister. That’s the constitutional position.”

What attempts have been made to address concerns over the alleged partisan role played by Governors?

The National Commission To Review the Working of the Constitution appointed by the Atal Bihari Vajpayee government in 2000 recommended significant changes in the selection of Governors. The Commission suggested that the “Governor of a State should be appointed by the President, after consultation with the Chief Minister of that State.

“Normally the five year term should be adhered to and removal or transfer of the Governor should be by following a similar procedure as for appointment i.e., after consultation with the Chief Minister of the concerned State.”

The Sarkaria Commission, set up in 1983 to look into Centre-state relations, proposed that the Vice President of India and Speaker of Lok Sabha should be consulted by the Prime Minister in the selection of Governors.

The Justice Madan Mohan Punchhi Committee, constituted in 2007 on Centre-state relations, proposed in its report submitted in March 2010 that a committee comprising the Prime Minister, Home Minister, Vice President, Speaker, and the concerned Chief Minister should choose the Governor.

The Punchhi Committee recommended deleting the “Doctrine of Pleasure” from the Constitution, but backed the right of the Governor to sanction the prosecution of ministers against the advice of the state government. It also argued for a provision for impeachment of the Governor by the state legislature.

This September was 5th warmest in 143 years: NOAA report