Trains between Bengaluru city and Kempegowda International Airport: All you need to know

Now, you can take a train from the Kempegowda International Airport to Bengaluru city. How long will it take? What is the fare? How many trains are there a day? Here's everything you need to know. The newly constructed station is on the Yelhanka-Chikkaballapur-Kolar railway line.

The Indian Railways Monday began running trains between Bengaluru city station and the new Kempegowda International Airport Devanahalli (KIAD) railway station, allowing passengers to commute between the city and the airport by train.

Where is the KIAD railway station situated?

The newly constructed KIAD railway station is on the Yelahanka-Chikkaballapur-Kolar railway line. This station is situated close to the northwest boundary of the Kempegowda International Airport, Bengaluru, around 3.5 kilometres away from the terminal.

How can one reach the airport from the railway station?

Shuttle buses are being operated by the Bangalore International Airport Limited (BIAL) to various parts of the airport free of cost. The timing and frequency of the shuttle service are synchronised with the train timings.

#Bengaluru airport halt station to be opened to public from tomorrow. @IndianExpress @ralpharakal

The bus journey from the first to the last stop is expected to take 20 minutes, in both directions. 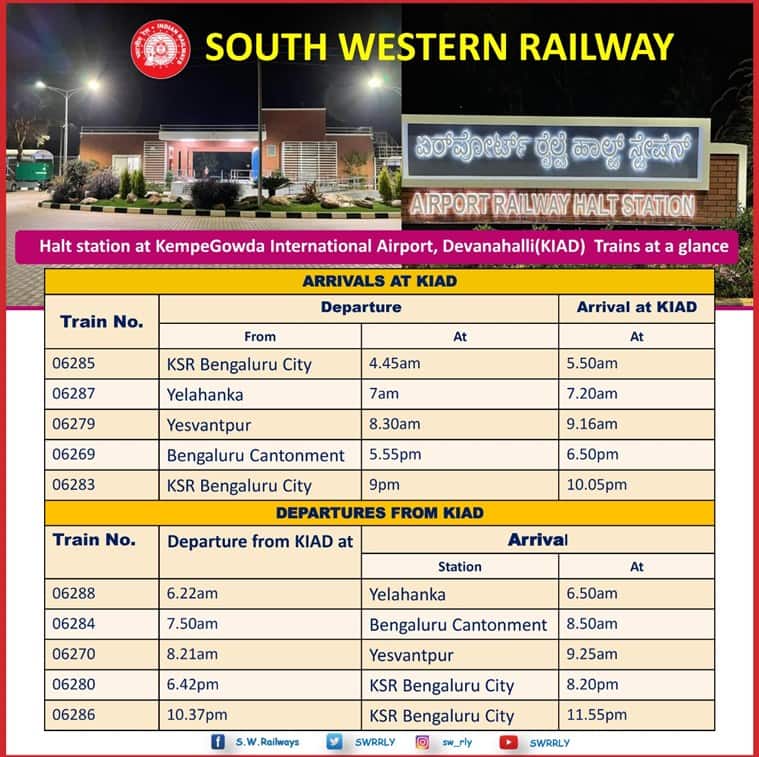 As of now, there are five trains that halt at KIAD

How many trains have stoppages at KIAD now?

Five trains, to begin with. While trains from KSR Bengaluru City will leave once at 4.45 am and 9 pm, other trains will leave from Yelahanka, Yeshwantpur and Bangalore Cantonment stations at 7 am, 8.30 am and 5.55 pm, respectively.

All these trains will operate six days a week, except on Sundays. More trains are expected to have stoppages at the railway station in the coming months considering the demand.

How much time does it take for one to reach the airport from the city?

Trains operating from KSR Bengaluru and Bangalore Cantonment railway stations to the airport take 60-70 minutes, while those from Yeshwantpur take around 45 minutes. From Yelahanka, the train commute is 20 minutes.

The Kempegowda International Airport railway board

How much does it cost?

Fares are fixed between Rs 10 and 15 for normal passenger trains. Travelling in an express train — for which stoppage at KIAD will be finalised later — from the city would cost up to Rs 30. This is in comparison with spending between Rs 250 and Rs 1,000 for a one-way ride to the airport in a bus or taxicab, respectively.

What are the facilities available at KIAD?

The KIAD railway station has a booking counter, a concourse area, separate restrooms for males and females with provision for passengers with reduced mobility, granite benches for seating, and drinking water facilities. Visual signages on arrivals and departures of flights at KIA are also exhibited in the railway station.