The Zojila Tunnel: How it will boost winter economic activity in Ladakh

The tunnel will be a game changer, as it will now allow the defence forces to send supplies to Ladakh throughout the year. 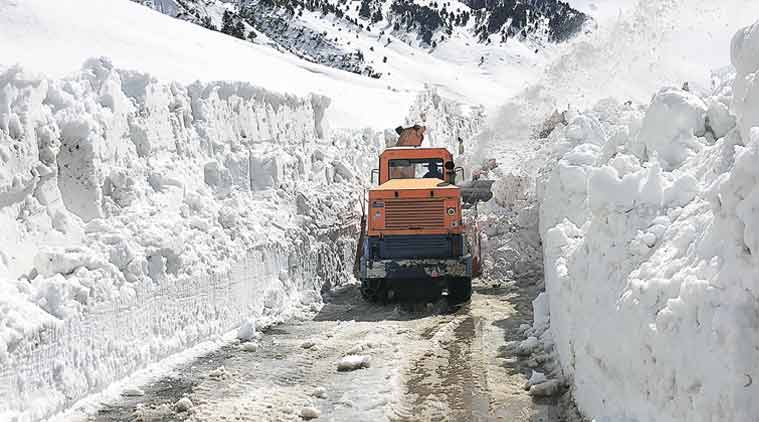 The construction work of the tunnel will be completed in 7 years. (Express Photo)

Last month, Prime Minister Narendra Modi visited Leh to unveil a plaque to mark the commencement of construction of the 14.31 kilometre-long Zojila tunnel in the north-east of Srinagar on Srinagar-Leh section of National Highway 1 in Jammu and Kashmir. The tunnel will reduce the travel time from Baltal to Drass drastically. It will provide all-weather connectivity between Srinagar, Kargil and Leh, which otherwise remain cut-off from rest of country for several months in the winter due to heavy snow.

Need for an all-weather road

Leh is connected to the rest of the country through two main roads: Jammu-Srinagar-Zojila-Kargil-Leh and the Manali-Sarchu-Leh roads. The movement of traffic is limited to around six months on these two routes because of snowfall in the passes and threat of avalanches. The Zojila pass on the Srinagar-Leh route is situated at an altitude of 11,587 feet on the Srinagar-Kargil-Leh national highway. Due to heavy snowfall during the winters, the highway remains closed from December to April, thereby making air the only mode of connectivity. The 14.15 km-long, two-lane bi-directional single tube Zojila tunnel is being constructed along with a 14.20 km long Parallel Escape (egress tunnel). It will be India’s longest road tunnel and Asia’s longest bi-directional tunnel. The project is estimated to cost Rs 6,808.69 crore, and the tunnel will be constructed between Baltal near Sonamarg and Manimarg in Drass.

The Zojila tunnel is the only viable alternative to ensure Ladakh’s year-round connectivity. The project will not only enhance the safety of travellers crossing the Zojila Pass but will also make the travel on Srinagar-Kargil-Leh Section of NH-1 free from avalanches. “The construction of Zojila Tunnel shall bring about all-round economic and socio-cultural integration of these regions, which remain cut-off from the rest of the country during winters due to heavy snowfall for about six months,” Sanjeev Malik, the executive director of National Highways and Infrastructure Development Corporation Limited (NHIDCL), the firm tasked to carry out the project, told The Indian Express.

The all-weather safe road connectivity is important from the strategic point of view as well. According to officials, road connectivity is important for defence forces, keeping in view the activities carried out by China and Pakistan along the borders in Ladakh, Gilgit and Baltistan regions. Army officials say that the tunnel will help the Leh-based 14 Corps, which is responsible for military developments in areas near the Pakistan and China borders. While Ladakh is connected to Pakistan through the Line of Control (LoC), Line of Actual Control (LAC) connects the region to China. “For six months, due to the closure of roads, our logistics and supplies are shipped through the air. This tunnel will be helpful to the defence forces by all means,” a senior army officer posted in Leh told The Indian Express. “In hostile times, this tunnel would be very helpful because it would ensure continuous logistics and other necessary supplies.” A bird rests on a road sign near the Zojila Pass, 108 kilometres (68 miles) north of Srinagar. (AP Photo/File)

One of the reasons the project is considered a “modern-day marvel” is because it is the first of its kind in such a tough geography. There will be as many as nine curves, and the design speed will be 80 Kmph. “The Zojila tunnel has been planned as a modern tunnel. It will have the latest safety features including a fully transverse ventilation system, tunnel emergency lighting, and a CCTV monitoring tunnel radio system. It will have pedestrian cross-passages at every 250 metres. Also, motorable cross-passages and lay-bys shall be provided at every 750 metres,” Malik said. He added that the project will adopt state-of-the-art methods of construction, out-of-the-box technical solutions, and real-time supervisory control and data acquisition. According to NHIDCL officials in New Delhi, tunnelling through the fragile Zojila formations would throw up geological surprises. The officials said that they were aware of the challenges including the lack of oxygen, snow accumulation up to 25-30 feet, and peak minimum temperature of -45°C. “We are in talks with an international company, which expertise in construction work in such low temperatures,” a senior engineering official involved in the project said. “The entire project site is prone to avalanches…, so it is going to be a challenging task,” Malik added.

On completion, the project could be a game changer for Ladakh. “All the sectors will benefit, be it tourism or any other area. This tunnel will definitely bring about a big change in the lives of the people here,” Ladakh MP Thupstan Chhewang told The Indian Express. He added that the project would trigger a boost in employment and business opportunities.

“It (tunnel) will become an economic lifeline for the people living in Ladakh. The economy will definitely improve and peoples’ lives will be more comfortable,” Nawang Rigzin Jora, Congress MLA from Leh, said, stressing that the project was approved by the UPA in 2013. “The tunnel will actually change the life of the people, especially during the winters… Medicines, vegetables and other important items are flown through the air during winters, which makes them expensive.”