Explained: The growth of Indian Americans, in public office and industry

Indian Americans, who make up 1% of the US population, own a third of all Silicon Valley start-ups. About 8% of all high-technology firms in the US were founded by Indian Americans. 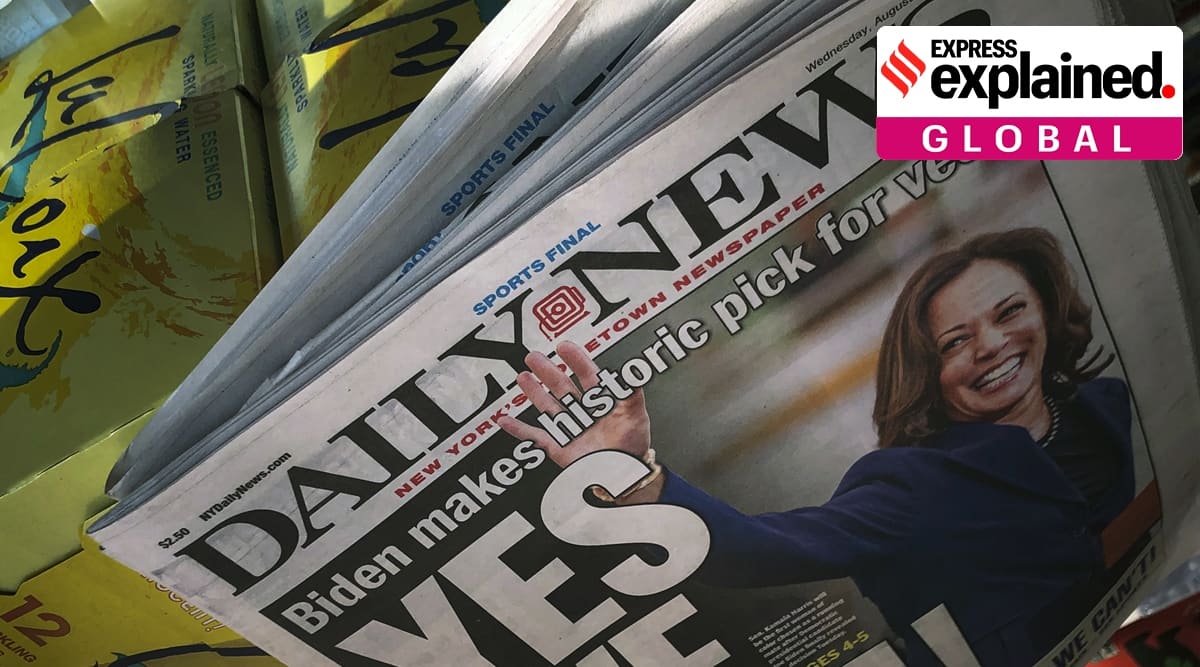 Kamala Harris is pictured on the front page, after Joe Biden picks her as his VP. (AP Photo)

The rise of Kamala Harris, daughter of an Indian mother, as the Democratic Party’s candidate for Vice President represents a coming-of-age of the Indian American community in the United States.

Harris was born to civil rights activist parents a year before the Immigration and Nationality Act of 1965 was passed; this Act relaxed the quota regime that restricted foreigners. At that time, there was one Indian American lawmaker in the US House of Representatives — the Punjab-born Dalip Singh Saund, also from California.

Like Saund, Harris chose a career in law. She worked in the office of the District Attorney of Alameda county in 1990. Soon after, the Congressional Caucus on India and Indian Americans was created in 1994 to work on India-US ties and the interests of Indian Americans. The same year, Nimi McConigley was elected to the Wyoming state legislature, becoming the second Indian American representative in the US.

Two other persons of Indian origin — Bobby Jindal and Nikki Haley — also served as Governors of Louisiana and South Carolina, respectively, in that period.

Read | From policy to family: How the Kamala Harris nomination is relevant to India

Today, more Indian Americans hold public office than ever before (Chart 1). However, politics is far from being the only sphere in which the Indian diaspora has gained influence in the last few decades.

To begin with, in absolute numbers, the population of Indian Americans has grown ten-fold between 1980, the first US Census to count Indians as a distinct ethnicity, and 2010 (Chart 3).

Historically, Indians in the US worked in medicine, science & technology, engineering and mathematics-related jobs. Some, like the Patel community from Gujarat, took to the hotel industry and grew to dominate it. Others were entrepreneurs in Silicon Valley after the digital revolution of the 1980s.

In 1997, Ramani Ayer became the CEO of the Fortune 500 financial firm The Hartford, becoming the first in the list of Indian leaders heading American businesses.

Indian Americans, who make up 1% of the US population, own a third of all Silicon Valley start-ups, according to Nirvikar Singh, Sanjoy Chakravorty and Devesh Kapur, authors of the book The Other One Percent: Indians in America. About 8% of all high-technology firms in the US were founded by Indian Americans.

At present, 2% of the Fortune 500 companies of American origin — including Microsoft, Alphabet, Adobe, IBM, and MasterCard — are led by Indian American CEOs.

One in every seven doctors in America is of Indian descent; President Donald Trump’s top consultant on healthcare is Seema Verma.

And over half of all motels in the US are owned by Indian Americans, although there are no accurate estimates.

In addition, the current generation of Indian Americans comprises political activists, comedians and Hollywood and TV artists. For a long time, the most visible Indian on television was the Simpsons character Apu. Now, Indian American actors such as Kalpen Suresh Modi or Kar Penn, Aziz Ansari and Mindy Kaling star in leading roles, playing Indian characters in prime time shows that depict a warts-and-all picture of the so-called model minority.

Due to the lucrative fields in which most of them were employed, the median income of an Indian American household ($44,696 in 1990) was higher than that of all Asian communities at that time. Today, it is $90,711 for the Indian Americans — still much higher than the Asian-American average of $67,022.

Many Indians living in the US today were beneficiaries of visa programmes for students or high-skilled professionals that allowed them to stay and work in America. The number of such non-immigrant visas hit a peak in 2017, but has since been declining (Chart 4).

Harris, a Northern California native, is in favour of a more immigrant-friendly approach. A Bill she co-sponsored, which was vetoed in the Senate, would have granted permanent resident status to workers from India and China with pending green card requests.