Explained: What the return of the Taliban could mean for Afghan women

This time around, the Taliban has vowed to respect women’s rights and has even invited them to join the government. Many Afghans, however, remain skeptical. 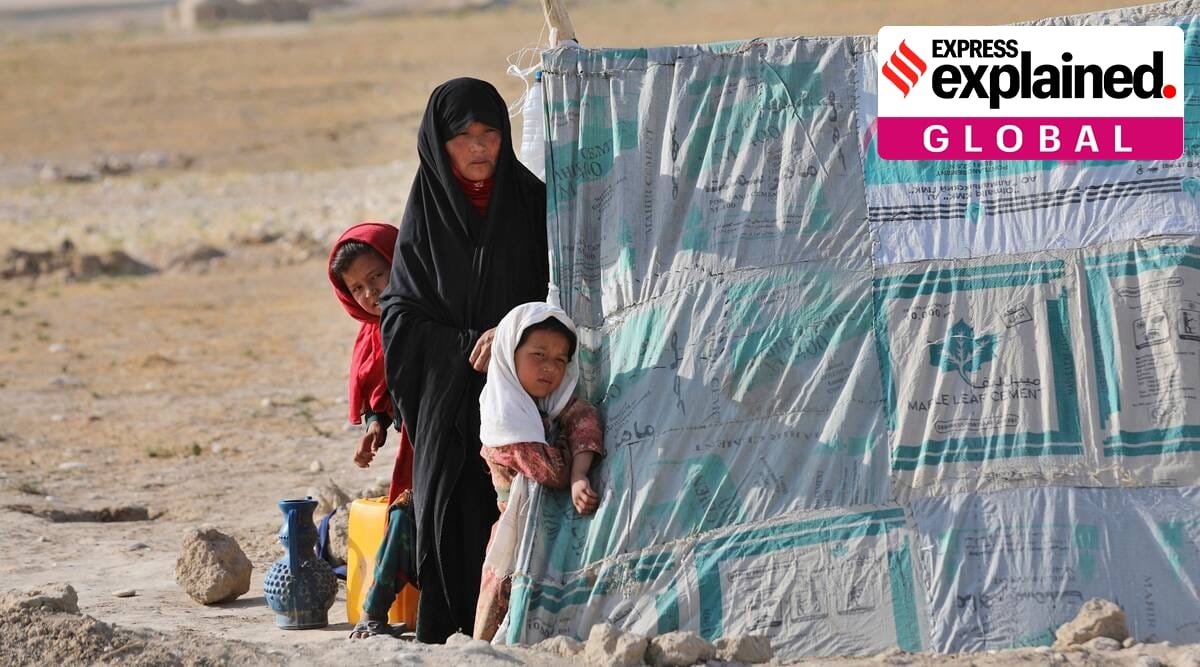 An internally displaced Afghan woman stands with her daughters in front a makeshift tent in a camp on a rocky patch of land, after fleeing fighting between the Taliban and Afghan security personnel, on the edge of the city of Mazar-e-Sharif, northern Afghanistan. (AP)

Days after the Taliban swiftly seized control of Afghanistan, an unprecedented scene played out on a popular local news channel — a top representative from the militant group sat down for an interview with a woman news anchor, to discuss the situation on the ground in Kabul. This is believed to be the first time an Afghan woman conducted an interview with a senior Taliban representative inside the country’s borders.

The interview between TOLO News host Beheshta Arghand and Taliban representative Mawlawi Abdulhaq Hemad marked a sharp shift from the Taliban of the 1990s, when women were largely confined to their homes, and banned from working or going to school. This time around, the Taliban has vowed to respect women’s rights and has even invited them to join the government.

In this program, host Beheshta Arghand interviews Mawlawi Abdulhaq Hemad, a close member of the Taliban’s media team, about Kabul’s situation and house-to-house searches in the city. https://t.co/P11zbvxGQC pic.twitter.com/Pk95F54xGr

Many Afghans, however, remain skeptical. Thousands have already fled the country, fearing a return to a brutal and repressive regime.

On Sunday, a small group of Afghan women dressed in black abayas and hijabs were seen marching through the streets of Kabul, holding placards and chanting slogans — reportedly the first agitation of its kind since the militant group seized control of the country. In clips shared on social media, the women are seen demanding equal rights, undeterred by the armed Taliban fighters patrolling nearby.

What has the Taliban said about women’s rights so far?

Since seizing control, Taliban officials have repeatedly tried to assure Afghan citizens, particularly women, that this time will be different. Earlier this week, the Taliban announced “amnesty” across the country and urged women to join its government. Some representatives have said that women will be allowed to work and study.

“We assure that there will be no violence against women,” the spokesman, Zabihullah Mujahid, said. “No prejudice against women will be allowed,” he said, adding a significant caveat — “but the Islamic values are our framework.” Women will be permitted to participate in society as long as it is “within the bounds of Islamic law.” Earlier, Enamullah Samangani, a member of the Taliban’s cultural commission, also addressed the concerns of women, acknowledging that they were “the main victims of the more than 40 years of crisis in Afghanistan.”

“The Islamic Emirate of Afghanistan is ready to provide women with an environment to work and study, and the presence of women in different (government) structures according to Islamic law and in accordance with our cultural values,” he said.

The Taliban has also said women will not be required to wear a full Burqa, and can opt for just the hijab (headscarf). When they were last in power, the Taliban had made full burqa compulsory.

“The burqa is not the only hijab (headscarf) that (can) be observed, there are different types of hijab not limited to burqa,” spokesperson Suhail Shaheen told Britain’s Sky News. The burqa is a full-body veil that is worn over other garments, with a mesh screen over the eyes. Shaheen, however, did not specify what other types of headscarves would be acceptable.

What is the situation on ground?

Even if the Taliban stay true to their word and grant women more freedoms, the extent of it depends on their reading of Sharia religious law. Despite their assurances, parts of the country are seeing a return to the repressive old order, with women in some provinces asked not to leave the home without a male relative escorting them. Women were denied access to universities in some places, local media reported.

A UN report in July stated that the number of women and girls killed and injured in the first six months of 2021 has doubled from the same period last year. In areas controlled by the Taliban, girls have been banned from returning to school and there have been reports of several forced marriages. United Nations secretary general António Guterres said he was “receiving chilling reports of severe restrictions on human rights” throughout the country. “I am particularly concerned by accounts of mounting human rights violations against the women and girls of Afghanistan,” he said at a meeting of the Security Council.

Between 2020 and 2021, after the US announced it was pulling back its troops from the country, several rights groups flagged what they saw as an impending human rights crisis.

For instance, in June 2020, Human Rights Watch in a report titled “You Have No Right to Complain” noted, “While in power in Afghanistan in the 1990s, the Taliban’s rights record was characterized by systematic violations against women and girls; cruel corporal punishments, including executions; and extreme suppression of freedom of religion, expression, and education.” In this Aug. 10, 2021 file photo, an internally displaced woman from northern provinces, who fled her home due to fighting between the Taliban and Afghan security personnel, has her blood pressure taken after taking refuge in a public park in Kabul, Afghanistan. (AP)

Meanwhile, Amnesty International in a public statement titled ‘Afghan women’s rights on the verge of roll back as international forces withdraw and peace talks in stalemate’ said, “The Taliban has historically enforced harsh, discriminatory policies against women with the result of women being excluded from public life.

When the Taliban were ruling the country from 1996 to 2001, women were denied their rights to education and accessing healthcare, and their right to freedom of movement was severely restricted, they could not appear in public without a close male relative, and were subject to harsh, disproportionate punishments even for minor “offenses”.”

What was it like for women under the Taliban regime in the late 1990s?

During the Taliban’s rule between 1996 and 2001, Afghan women were brutally repressed. Through an extreme interpretation of the Sharia Islamic law, the Taliban limited women’s movement, as well as their right to education and healthcare.

Women were forced to wear burqas and cover their entire face and body. Schools for girls were shut down. They were denied basic healthcare facilities. Women faced brutal punishments — some were publicly flogged or stoned, others even executed — for breaking the rules. Internally displaced Afghans who fled their home due to fighting between the Taliban and Afghan security personnel, are seen at a camp in Daman district of Kandahar province south of Kabul, Afghanistan, Thursday, Aug. 5, 2021. (AP)

This situation drastically improved in 2001, following the US-led invasion of Afghanistan. While they continued to face violence and discrimination, women enjoyed a multitude of new freedoms. As of last year, at least a quarter of the members of the Afghan Parliament were women. Around 40 per cent of students in Afghanistan were female in 2020, according to USAID figures.

This week, Salima Mazari, one of the first women governors in Afghanistan, who took up arms against the Taliban, was reportedly captured by the insurgent group.

As many as 21 countries, including the US and the UK, issued a joint statement on Wednesday expressing their concerns about the rights of women and girls under the Taliban. They said they were ready to provide humanitarian aid and would closely monitor the situation on ground.

“We are deeply worried about Afghan women and girls, their rights to education, work and freedom of movement. We call on those in positions of power and authority across Afghanistan to guarantee their protection,” read the joint statement released by the US State Department.

Refugees in Istanbul: Is anti-migrant sentiment growing in Turkey?