President-elect Jair Bolsonaro is proudly homophobic, openly misogynistic, swears by family and religious values, and has vowed to “cleanse” Brazil of corruption. 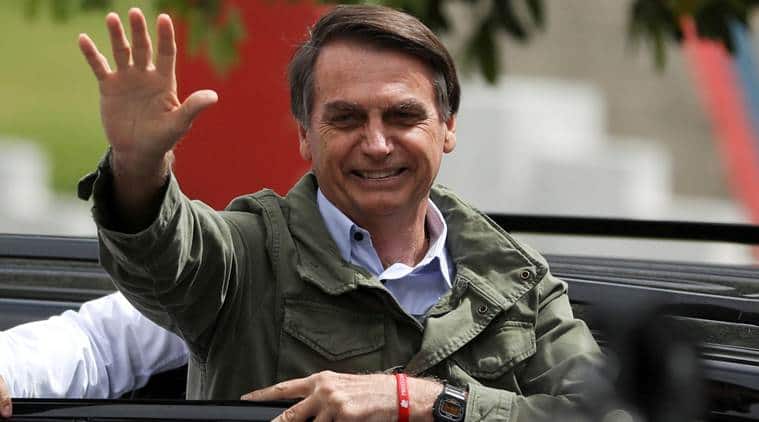 Jair Bolsonaro is much more to the right than any of the recently elected conservative leaders in Argentina, Chile, Peru, Paraguay and Colombia. He will take charge as President on January 1, 2019. (Reuters Photo/File)

Brazilians have elected strident far right populist Jair Bolsonaro to be their President, making the most radical political choice since the return of democracy in 1985. President-elect Bolsonaro is proudly homophobic, openly misogynistic, swears by family and religious values, and has vowed to “cleanse” Brazil of corruption. He is also vocally pro-torture, wants to physically eliminate his rivals or throw them out of the country, give the police more powers to kill, put military leaders in top government positions, and allow every “honest citizen” to have a gun.

Bolsonaro is much more to the right than any of the recently elected conservative leaders in Argentina, Chile, Peru, Paraguay and Colombia. He will take charge as President on January 1, 2019.

It is clear that Bolsonaro benefited from the tidal wave of anger that had built up against the status quo in a country that has been in political and economic turmoil for two years. Brazil is in deep recession, nearly 13 million people are without jobs, a large number of its politicians are badly stained by corruption, and crime has skyrocketed — with nearly 64,000 people killed in 2017. Bolsonaro presented himself as the alternative, rejecting both the political establishment and many of its democratic ideals, while championing and aligning himself with conservative institutions that Brazilians continue to have faith in — religion, family, the army. “We have everything we need to become a great nation,” he said in a video he posted on Facebook after his victory. “Together we will change the destiny of Brazil.”

Brazil was ruled by Luiz Inácio Lula da Silva’s Workers’ Party (PT) between 2003 and 2016, and a big reason for the election result lies in the way the Left has ceded ground. Lula, President from 2003 to 2011, was succeeded by Dilma Rousseff, who was impeached in 2016. The conservative Michel Temer took over, but he was extremely unpopular, with an approval rating of just 2%. For a while, Lula, with a devoted following among the working classes, was frontrunner in the election — but this April, he was sent to jail for 12 years and ruled out of the contest. The fact that Lula was unable to transfer his potential votes to the replacement candidate Fernando Haddad, probably means that many Brazilians no longer have patience for the corruption of the traditional parties.

The 63-year-old former Army captain’s Social Liberal Party (PSL) is an anti-establishment group that advocates strong social conservatism along with pro-market policies. Bolsonaro has been in Congress for close to 30 years — a powerful polariser whose views have long elicited shock and concern in Brazil. While he has favoured “dictatorship” in the past, he said in his first comments post-victory that he would defend Brazil’s democracy and uphold its constitution.

Bolsonaro’s 10 percentage-point margin of victory is a clear mandate for sweeping change, and stock markets reacted positively to his victory. However, the PSL, despite a remarkable surge that saw it win 52 seats in the legislative election earlier this month, is still behind the PT (56 seats) in Congress. Bolsonaro will also have to work with as many as 28 other parties in the House, which could make it difficult to implement his radical agenda. A supporter holds a balloon with the image of President-elect Jair Bolsonaro. (AP/File)

The President-elect is an admirer of President Donald Trump and his policies. The American President has congratulated Bolsonaro, sometimes nicknamed “Trump of the Tropics”, on his victory. A number of Latin American leaders have congratulated him on his triumph. China, the country that Bolsonaro has accused of trying to “buy” Brazil, has said it would continue to “deepen mutually beneficial cooperation and promote common development of both countries to benefit the two peoples”. Brazil is the ‘B’ in BRICS, and will be the host of the 2019 Summit. India has formed with Brazil, Germany, and Japan the G4 grouping to support each other’s bids for permanent seats on the United Nations Security Council.