Explained: What is at stake in Nepal’s political crisis?

Nepal's political crisis: The Lower House of Parliament has been dissolved at the recommendation of Prime Minister Oli, who is fighting a losing battle in his party. A look at the questions it raises over the Constitution and left unity 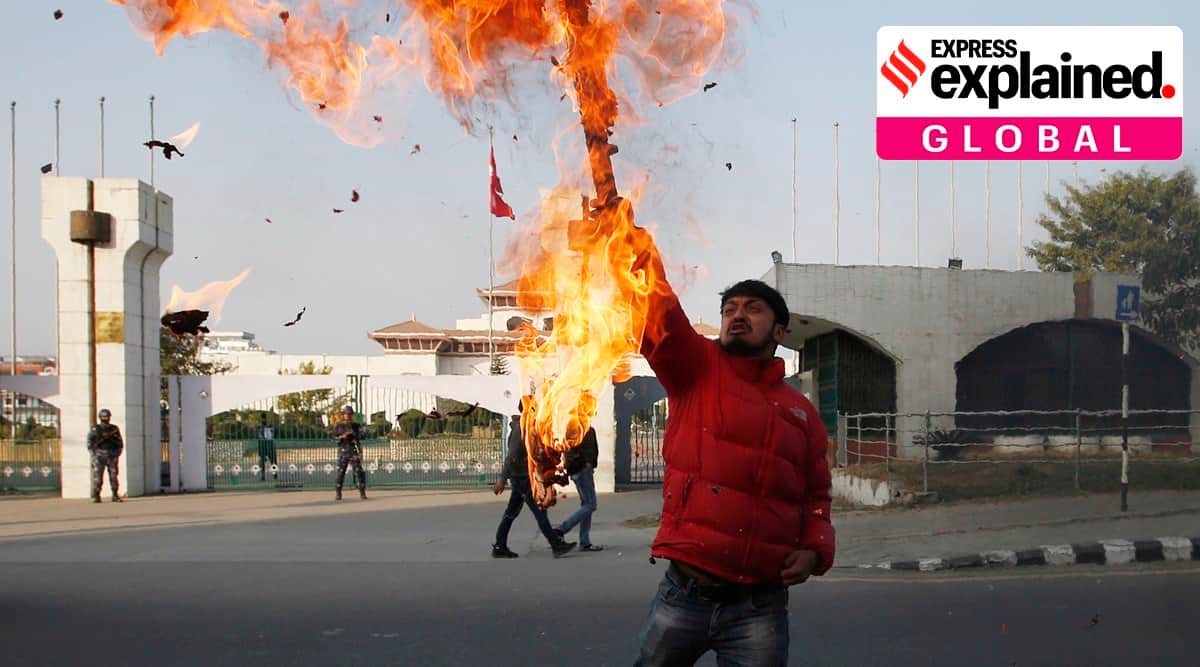 This effectively ended the unity forced among the left forces that had led to the creation of the single, grand Nepal Communist Party three years ago. It plunged national politics into turmoil and the five-year-old Constitution into uncertainty, and raised questions about the haste with which the President approved Oli’s recommendation.

Oli took the step when he realised that a factional feud within the party had reached the point of no return and he faced possible expulsion both as party chief and as Prime Minister. Since then, a dozen petitions have been filed in the Supreme Court challenging the dissolution with two years left of the present House’s tenure. Each faction has also approached the Election Commission claiming it is the real party.

Oli is fighting a losing battle in the party. He has declared that the next election will be held on April 30 and May 10 next year with him leading a caretaker government, but his fate will be decided by agitating crowds and the Supreme Court. There’s also a movement for restoration of Nepal as a Hindu kingdom.

His move has created bitterness between the breakaway communist group he leads and other parties. On Monday evening, Oli got his followers to padlock the party office, effectively bringing it under his control, but going by the numbers in the dissolved Parliament, the Central Secretariat, the Standing Committee and the Central Committee, Oli is in a minority. But with Parliament dissolved and with a President seen as favourable to him, Oli will have the power to rule without being accountable to none. The dissolution came hours before a Standing Committee meeting that was expected to order a probe into corruption charges levelled against him by party co-chairman Pushpa Kamal Dahal Prachanda.

The unification & its end

Prachanda led the Maoist insurgency for a decade (1996-2006) before joining mainstream politics. Oli was a fierce critic of the politics of violence that caused more than 17,000 deaths. But Oli approached the Maoists in 2017 for a merger between their parties, pre-empting the possibility of an alliance between the Maoists and the Nepali Congress that may have come in the way of Oli’s prime ministerial ambitions.

Oli was leading the Communist Party of Nepal-Unified Marxist Leninist, and Prachanda represented the Nepal Communist Party (Maoist). Following the merger, the two leaders agreed that they would lead the government by turn, a promise that Oli did not honour at the end of his two-and-a-half years, thus sowing the seeds of separation. Now, as a split appears inevitable, Oli is hoping to continue in power with those following him.

What has happened has left a question mark over the Constitution of 2015, and its key features like federalism, secularism and republic. There are already popular protests on the streets.

The split in a party with a two-thirds majority has raised concerns that it may lead to a systemic collapse. “We will go for a decisive nationwide movement to have this Constitution dumped,” said Balakrishna Neupane, convener of an ongoing citizens’ movement. 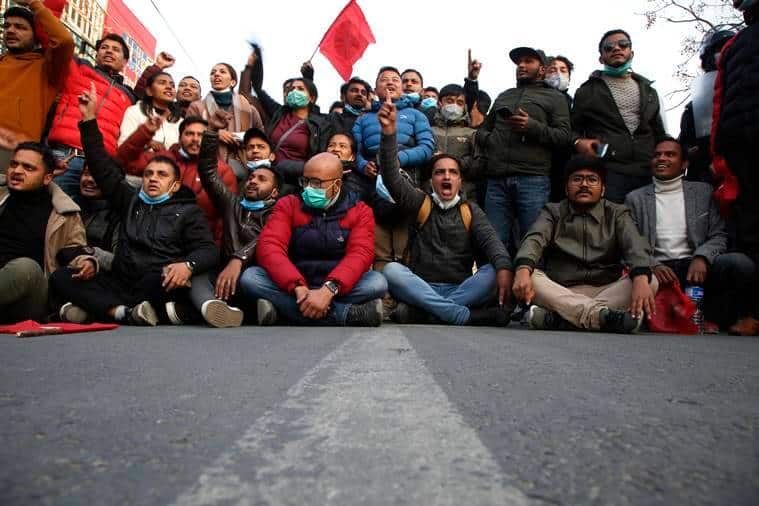 Dissolution of the House is not new in Nepal, but this is the first such instance after the new Constitution of 2015 that places safeguards against dissolution. “The new constitution does not envisage such a step without exploring formation of an alternative government,” said Dr Bhimarjun Acharya, a leading constitutional lawyer.

The 1991 Constitution, scrapped in 2006, had provisions for dissolution of Parliament at the Prime Minister’s prerogative. During the time it was in force, Parliament was dissolved thrice. The first Parliament elected in 1991 was dissolved on the recommendation of Prime Minister G P Koirala after he failed to have a vote on thanks motion by the King passed in the House. The Supreme Court upheld that dissolution.

But in 1995, the Supreme Court rejected the dissolution by Prime Minister Manmohan Adhikary after a no-trust motion had been tabled but before the loss of majority was proved. The court held that the executive did not have the right to snatch an issue under consideration of the legislature.

The opposition Nepali Congress and the Madhes-based Janata Samajbadi Party have reasons to hope than an early poll will earn them a bigger space in Parliament. But it fears that the likely street protest and violence, besides the onset of rain in late April and early May, could be used as an excuse to further defer the election.

“I doubt elections will be held on the prescribed dates,” said Shekhar Koirala, member of the Nepali Congress central committee. The Nepali Congress or the Janata Samajbadi Party have, however, not been very proactive in Parliament in countering the government.

The Nepal Army has made it clear that it will remain neutral in the ongoing political developments. This implies that if Oli tries to rule with the help of security forces to maintain law and order and contain protests, it is uncertain how far the Army will play along.

China has been a big factor in Nepal’s internal politics since 2006. It is seen as having lobbied, visible or secret, to prevent the split. China has also invested in crucial sectors like trade and Investment, energy, tourism and post-earthquake reconstruction, and is Nepal’s biggest FDI contributor. It has increased its presence in Nepal because of a perception that India played a crucial role in the 2006 political change.