Explained: Putting a cost to coronavirus

The coronavirus outbreak has affected travel to and from many countries, industrial activity and global supply chains. How do economists estimate the cost of an outbreak of this kind for national and global economies? Airline fares have fallen as people avoid travel for fear of infection.

Nitrogen dioxide levels fell dramatically in China as a result of industrial activity and travel coming to a standstill after the coronavirus outbreak. Airline fares have fallen as people avoid travel for fear of infection. With new cases being reported from Eastern Europe and Palestine, the disease has now reached every inhabited continent.

While it may be difficult to arrive at an agreed upon number for the cost of the outbreak — given the issues around a “statistical value of human life” and the uncertainty associated with viral diseases — the mildest global pandemic can be expected to wipe out at least 1% of the world’s GDP, experts say. How do economists arrive at such numbers, and why are there inconsistencies?

In what way does the coronavirus outbreak affect the economy?

To prevent the spread of a disease, the authorities in an affected country can ask people to remain home, as they did in China. Along with industrial activity, retail outlets and restaurants also see a reduction in their business. Foreign governments may issue advisories asking people to avoid unnecessary travel to an affected country, such as those issued by the US, UK, and India to their citizens. Thus, the affected country sees a reduction in economic activity. The World Bank’s 2008 report (published after the SARS outbreak of 2004) said that about 60% of all economic loss during a flu outbreak will be as a consequence of “panicky efforts of individuals to avoid being affected”. Globalisation has ensured that supply chains worldwide are interconnected significantly. Thus, as production has slowed in China, Indian manufacturers that source intermediate goods like components of electrical and electronic equipment have had to stop producing, or to find other suppliers. Even if alternative supply channels can be established in time to prevent a disruption, manufacturers have to invest considerable resources, for which they may have to increase prices to cover their additional costs.

The cost of providing treatment to the sick, and preventing the spread of a disease imposes additional costs on the economy. In poor countries where healthcare systems are weak to begin with, the cost of treatment during an outbreak is even higher — and the little that they can afford to spend may not be enough. The Global Preparedness Monitoring Board — an independent body that works to ensure preparedness in health crises — noted in its 2019 report that “communities that cannot care for a pregnant woman and her newborn child cannot protect against a disease outbreak”. Poor countries with little state capacity report higher mortality and higher GDP losses even if they step up spending during outbreaks.

How do economists calculate the cost of an epidemic?

Most often, historical data on deaths and losses to production during epidemics are used to predict the cost of present and future epidemics. Models are prepared using past data, and are then fed information about the present to arrive at the cost. Estimates of the exact cost can differ depending on the characterisation of the risk level or the assessment of the improvements in the healthcare infrastructure.

In one model, economists draw from actuarial sciences to determine the cost of an epidemic. These models are “stochastic”, which means that they consider the random nature of the virus outbreak. To put it simply, since the severity (in terms of mortality) and duration of the outbreak are not known with certainty, probabilities associated with different levels of severity and durations are used to arrive at a monetary value of the outbreak. 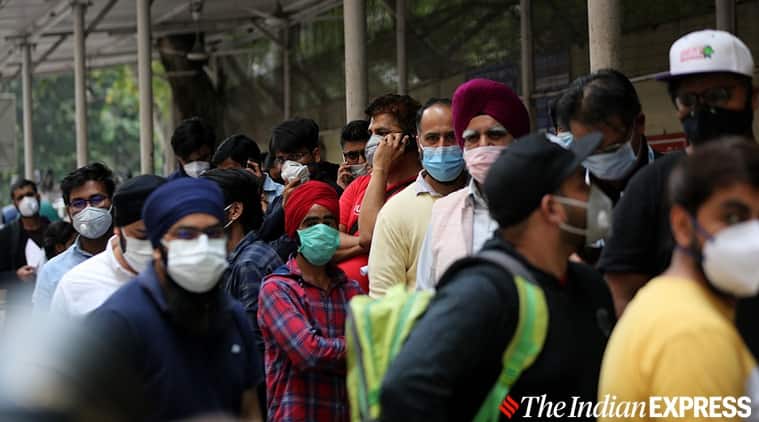 Outside a coronavirus facilitation centre at the RML hospital in New Delhi. (Express Photo: Tashi Tobgyal)

Others adopt more sophisticated techniques, making use of dynamic macroeconomic and microeconomic models to capture the interlinked supply chains that are the norm today. They incorporate information on the output of various sectors of production in multiple countries, labour market conditions (restrictions on movement and wages) in the countries, fiscal responses to outbreaks, taxes, etc. Behavioural changes of consumers — avoiding sectors such as travel and tourism — are also modelled.

What are the differences between the two models?

The most obvious difference is in their “unit” of observation — the risk-return models developed by actuaries aggregate the loss of income from individuals affected by the disease, whereas the dynamic models assess losses incurred by each sector and then calculate the impact felt by each country.

In 2016, Lawrence Summers, a former World Bank chief economist, and other economists demonstrated a risk-return model in a paper to calculate the “inclusive” cost of a pandemic. They used records of excess deaths and income loss in each age group to determine the cost of the pandemic. This cost included the intrinsic cost of premature mortality and illness, and was estimated to be around $490 billion (about 0.62% of global GDP in 2013).

Using the dynamic model, two Australian National University researchers estimated that the mildest flu outbreak could reduce global GDP by 0.8% ($330 billion in 2006). More severe epidemics will result in higher losses — an epidemic of the scale and intensity of the 1918 Spanish Influenza outbreak will cause a global GDP loss of $4.4 trillion.

Don’t miss from Explained | Sorry, no handshake, it’s the coronavirus. But what do you do, then?

Are there any projections for what an outbreak can cost India?

The Australian National University researchers projected that in the event of a pandemic, India’s economic growth will suffer a considerable setback.

India relies on imports for a variety of raw materials for industries ranging from pharmaceuticals to telecommunications, making it vulnerable to supply shocks anywhere in the world. In addition, the report notes that India has not conducted the voluntary Joint External Examination that the WHO recommends to improve a country’s response to a public health emergency. Individual states may differ, however — as seen in Kerala’s timely response to the outbreak of the nipah virus.

India and the world have to meet coronavirus challenge together: PM