Shamima Begum, terrorist or victim: As the UK hears her case, here’s her story

Apart from raising questions about terrorist recruitment and trafficking of minors, Shamima Begum's case has also led to a debate on whether citizenship is a right or a privilege. Take a look. 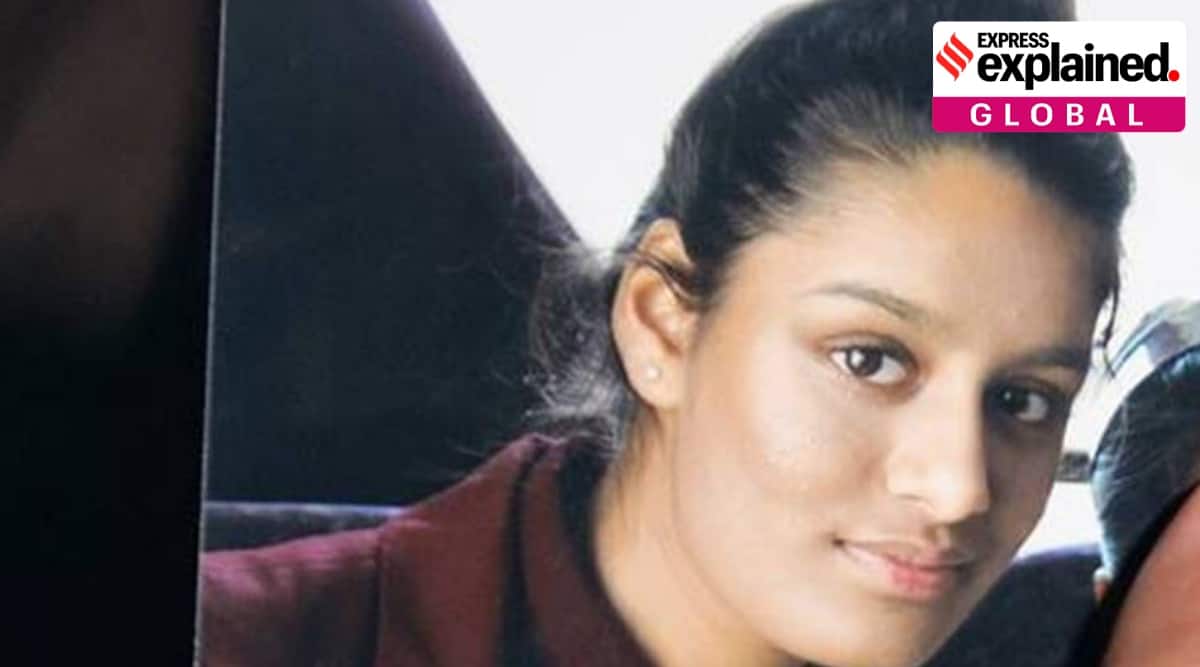 Shamima Begum was a student in East London private school Bethnal Green Academy, before she made her way to Syria to join IS. (Reuters file)

Shamima Begum, a Britain-born individual who had made her way to Syria to join the Islamic State (IS) when she was 15 in 2015, is currently fighting a legal case in the United Kingdom to challenge the removal of her British citizenship in 2019. Shamima and two of her friends, Amira Abase and Khadiza Sultana (who has since died in a bombing attack), had decided to travel to the self-styled ‘Caliphate’ of the IS, influenced by its propaganda on the Internet.

Recently, Begum’s lawyers told a London court that she was likely “a child victim of trafficking”.

Now 23, she is appealing against the citizenship decision at a five-day hearing at the Special Immigration Appeals Commission (SIAC), a specialist tribunal which hears appeals against decisions to remove citizenship on national security grounds.

Her citizenship was revoked by then-Home Secretary Sajid Javid. The move came after videos of Begum in a Syrian refugee camp came out, in which she was asking to come back.

Javid fiercely opposed her return, adding that he had the power to take away British citizenship from “dangerous dual nationals”, referring to Begum’s Bangladeshi heritage (her parents were born there)–however, she does not hold Bangladeshi citizenship and has never visited the country either.

Also in Explained Global |Why are major cities in China witnessing anti-government protests?

Apart from raising questions about how IS recruited people and the vulnerability of online ecosystems, Begum’s case has also thrown open questions about whether citizenship is a right or a privilege and what does it mean to be ‘stateless’. We take a look:

Who is Shamima Begum?

Begum was a student in East London private school Bethnal Green Academy (now renamed as Mulberry Academy Shoreditch), along with Abase and Sultana.

In December 2014, a schoolmate and friend of theirs, Sharmeena Begum (no relation to Shamima), left the UK to join IS in Syria.

In February 2015, police had tried to question the trio about Sharmeena’s whereabouts, and gave them letters asking for their parents’ permission for official statements. These letters never made it to the parents, and around two weeks later, the three left for Syria via Turkey, with Begum using her 17-year-old sister Aklima’s passport to travel, as reported by BBC.

Begum’s sister Renu told BBC that she hoped the trio, who she described as “young and vulnerable” had gone to Syria in an effort to bring Sharmeena back.

There were also claims that Begum was in touch with Aqsa Mahmood, a 20-year-old woman from Glasgow who was one of the first British women to voluntarily join IS in 2013. She was reportedly an active online recruiter, as well as a senior member of the all-female al-Khansaa Brigade in Raqqa, which was responsible for enforcing IS’ codes of female morality and behaviour.

A few months prior to her departure, Begum had asked Mahmood to contact her on Twitter, a sign of possible communication between the two. Mahmood was called a “disgrace” by her family when these reports came out; however, she later denied having any role in the trio’s recruitment.

In her first live TV interview on the British news show Good Morning Britain in 2021, Begum said that she had “started becoming very religious” around the time she left. “I was being fed a lot of information on the Internet by people in ISIS telling me that I need to come because I can’t be a good Muslim in the UK and that my family would only drag me down with them,” she added.

What did Shamima Begum do in Syria?

According to The Times, Begum married a Dutch fighter, Yago Riedijk, 10 days after her arrival in Raqqa. The couple had two children who died due to illnesses and malnutrition; it was when she was pregnant with the third (who also died) that Begum fled Baghuz (one of the last strongholds of IS) and requested to come back to the UK.

In 2019, The Telegraph reported that Begum had served as a part of IS’ morality police, and was permitted to carry a Kalashnikov rifle. The report also claims that she later also “worked for several months in al-Hisba”, IS’ religious enforcement unit.

There have also been allegations that Begum stitched suicide bombers into explosive vests–this meant that they could not be removed without detonation, according to The Independent.

In the 2021 TV interview, Begum insisted that she was “not a terrorist”. She also clarified her earlier controversial comments regarding the 2017 Manchester Arena bombings, which she had compared to airstrikes by Western powers killing unarmed people in Syria. She said she was unaware of the casualties, as she was of the other kinds of violence perpetrated by IS elsewhere.

Begum also claimed that she was completely cut off from the outside world while living in the IS. She said she didn’t have a phone, and neither her nor her husband could access the Internet.

“I am willing to go to court and face the people who are making these claims and refute these claims because I know that I did not do anything in ISIS apart from being a mother and a wife. These claims are being made to make me look worse because the government don’t actually have anything on me,” she said.

Shamima Begum’s attempts to be repatriated

“I’m not the same silly little 15-year-old schoolgirl who ran away from Bethnal Green four years ago… And I don’t regret coming here,” Begum told Anthony Lloyd, a reporter with The Times who had found her in the al-Hawl Syrian refugee camp in 2019. She said that she wanted to return to the UK, since she was scared that if she stayed in Syria, the child she was then pregnant with would die like the two before it.

She also called her friends Abase and Sultana “strong”–they had chosen to stay behind in ISIS. She added, “I respect their decision. They urged patience and endurance in the caliphate and chose to stay behind in Baghuz. They would be ashamed of me if they survived the bombing and battle to learn that I had left.”

Soon after this interview surfaced, her citizenship was revoked by Sajid Javid. Under British law, citizenship can be revoked if an individual maintains citizenship in another country–in Begum’s case, the government believed that she was eligible for Bangladeshi citizenship till the age of 21 through her parents, who maintained dual nationality.

However, the Bangladeshi government was quick to rule out the possibility of her being considered for citizenship. Foreign Minister A K Abdul Momen said Begum would face death penalty for supporting terrorism if she visits Bangladesh, adding that he would be “sad” if she was left stateless, but it had “nothing to do with us”.

Her husband Riedijk, who had surrendered, told BBC that he hoped he could be reunited with his wife and child, after Begum’s citizenship had been taken away. However, the Dutch government clarified that it would not help him with his repatriation, and neither would his family be allowed to join him.

Begum’s family and lawyer, Tasnime Akunjee, decided to appeal the decision to revoke her British citizenship. In 2021, UK’s Supreme Court ruled that she should not be allowed to return to challenge the decision because she posed a security risk. By then, Begum had been moved out of the al-Hawl refugee camp to another one and her third child had also died. The death caused some condemnation of Javid in British society — however, public opinion seems fairly divided over the possibility of Begum’s return.

She has also reportedly faced threats from within Syria over her vocal desire to return to the UK.

Journalist Richard Kerbaj’s book The Secret History of the Five Eyes (‘Five Eyes’ refers to the intelligence-sharing networks between the UK, the US, Canada, Australia and New Zealand), published in 2022, claims that the trio were smuggled into Syria by a Canadian double agent called Mohammed al-Rashed, whose role was covered up by the police and British security services. According to the BBC, he had smuggled multiple British people into Syria for at least eight months while sharing their passport information with Canadian authorities through the embassy in Jordan in exchange for asylum.

After this revelation, Begum’s lawyers have sought to portray her as a victim of child trafficking and grooming, in order to facilitate her return to the UK. Samantha Knights, who is representing Begum at the SIAC, said last week that the decision to remove her citizenship made her “effectively an exile for life”.

Begum’s lawyers also argued that the Home Ministry had not made enough enquiries into whether or not she was a victim of trafficking. They added that there was overwhelming evidence that she was “recruited, transported, transferred, harboured and received in Syria for the purposes of sexual exploitation”.

However, James Eadie, representing the British government, said in written arguments that Begum had aligned with IS and stayed in Syria for four years until 2019.

Eadie said Begum left IS territory “only as the caliphate collapsed”, adding: “Even at that stage, the evidence demonstrates that she left only for safety and not because of a genuine disengagement from the group.”

The Home Office has also argued that people who were radicalised and trafficked to Syria remain threats to national security, since exposure to extreme violence may have desensitised them.

Battlelines in Surat: Modi rules, BJP is The System, AAP registers — as a knock more than actual arrival 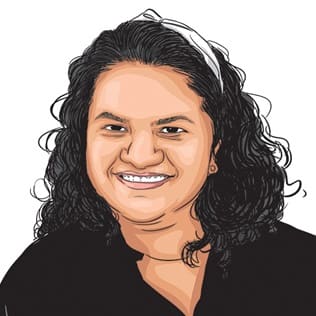