India coronavirus numbers explained: In the last one week, almost 35,000 new cases have been discovered in the state, taking the total number of confirmed infections to 1.61 lakh. A Covid hospital built by Tata Group at Kasaragod in Kerala. It was handed over to the state goverment on September 10.

India coronavirus cases: With more than 18,000 new cases being detected in the last three days, Kerala has emerged as the state with the fastest growing coronavirus numbers right now. Kerala still has relatively lesser number of confirmed infections compared to states like Maharashtra or Andhra Pradesh, but at the rate at which it has been adding new cases in the last couple of weeks, it is all set to make a re-entry into the list of top ten states with highest caseloads within a few days.

In the last one week, almost 35,000 new cases have been discovered in the state, taking the total number of confirmed infections to 1.61 lakh. The current growth rate of cases is 3.51 per cent per day, which is the highest in the country and more than double of national rate which is 1.53 per cent per day. Kerala also has close to 49,000 active cases, which is the fifth highest in the country. Only Maharashtra, Karnataka, Andhra Pradesh and Uttar Pradesh have more active cases.

On Thursday, chief minister Pinarayi Vijayan had described the situation as grave. “There is a steep hike in the number of positive cases in many districts. We are moving to a serious situation,” he had said.

Health economist and guest faculty at IIM Kozhikode Prof Rijo M John has said the recent surge in the state could be a result of relatively low testing because of which a lot of cases remain undetected. “While case have been growing, Kerala is not stepping up testing. Without more testing, we cannot even predict the peak for Covid19 cases in the state,” he said.

Kerala had been a slow starter in conducting diagnostic tests. It has picked up in the last couple of months, but as Dr Fazal Ghafoor, a member of the expert committee that advises the state government on Covid19 management, put it, there was need for carrying out many more tests. The state has conducted 26.57 lakh tests till now. For the last three days, it has been testing more than 50,000 samples, which is an improvement from previous weeks. The increased tests too have contributed in more cases being detected. 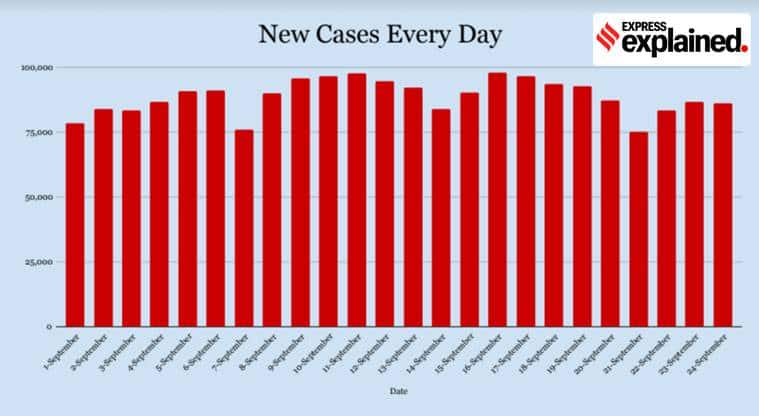 Meanwhile, the recoveries once again significantly outnumbered the detection of new cases in the country on Friday. More than 93,000 Covid19 patients were declared to have recovered, while over 85,000 new infections were detected. This takes the number of people to have been infected with the virus at some point to 59.03 lakh, out of which 48.49 lakh, or a little over 82 per cent, have now recovered.

In seven out of last eight days, recoveries have exceeded the new detection of cases, leading to a significant fall in the active cases. As on Friday, the active cases in the country had dropped to 9.6 lakh from a high of 10.17 on September 17.

The number of confirmed infections in Maharashtra has now touched 13 lakh. Close to 18,000 new cases were reported from the state on Friday, well below the recent normal of 22,000 to 25,000 cases every day. The death toll in the state has crossed 35,000, which is more than 37 per cent of all the coronavirus-related deaths in the country.

Odisha now has more than 2 lakh people who have so far been infected with the virus. The state has been reporting more than 4,000 cases every day