India coronavirus numbers explained: The decreasing daily numbers from Andhra Pradesh, mainly because it is a high contributor, is having an impact on the national figures as well. 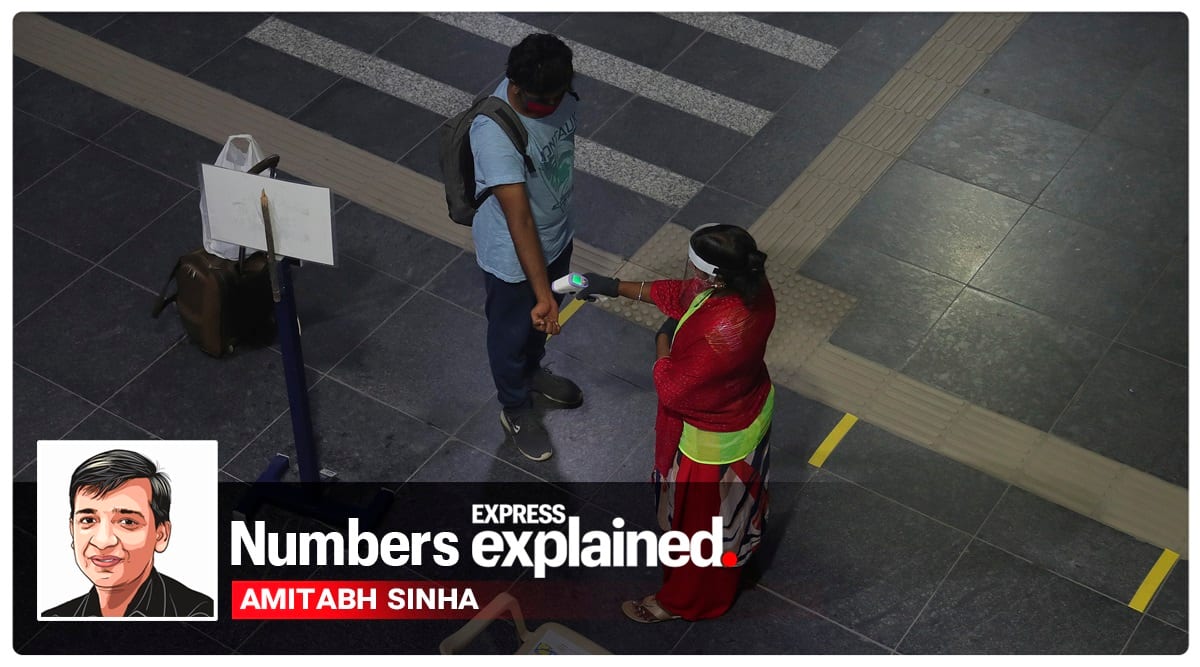 A staff member checks the body temperature of a commuter preparing to board the metro at a station in Hyderabad, Wednesday, Sept. 9, 2020. (AP Photo: Mahesh Kumar A.)

India coronavirus cases: For the last two weeks, the number of recoveries in Andhra Pradesh has been consistently higher than the number of daily detections of new infections of novel coronavirus. That has led to a gradual decrease in the number of active cases in the state, which has dropped from a high of 1.04 lakh to well below 90,000 now.

Andhra Pradesh has the second highest coronavirus caseload in the country. On Thursday, the total number of confirmed infections in the state crossed the six-lakh mark. But there are fewer detections of new cases happening now compared to two weeks earlier. For the last one week, the daily new infections have remained below 10,000. Andhra Pradesh was the only state which had been contributing more than 10,000 cases every day, apart from Maharashtra, which has been reporting more than 20,000 infections every day for two weeks now. 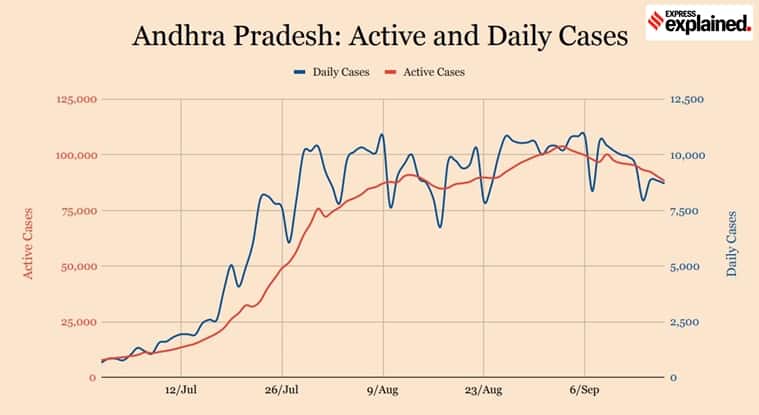 Number of new detections dropping below the number of recoveries happening every day is usually a very positive sign, especially if this holds for more than two weeks. Because that indicates that the infection rate might be slowing down. It also leads to a reduction in the number of active cases, as is happening in Andhra Pradesh, thereby lowering the burden on hospitals, healthcare staff and other health infrastructure.

But as the example of Delhi has shown, this trend can reverse any time. In Delhi, the recoveries had remained higher than the daily detection for more than a month, and its seemed the epidemic was coming under control. But then the trend reversed, and currently Delhi is experiencing a resurgence of the disease that is producing more infections every day than was seen the previous time.

But the decreasing daily numbers from Andhra Pradesh, mainly because it is a high contributor, is having an impact on the national figures as well. The number of daily infections in the country has remained in the 90,000s since September 9, and the declining numbers in Andhra Pradesh could help in keeping it there for some more time. Covid-19 cases in India in September

On Thursday, more than 96,000 new cases were detected across the country, taking the total number of confirmed infections to over 52.14 lakh. Out of these, more than 41.12 lakh, or about 79 per cent, have already recovered from the disease.

The number of active cases is decreasing steadily in Tamil Nadu as well, for reasons similar to the one in play in Andhra Pradesh. The number of new detections have remained lower than the recoveries for several days now. But Tamil Nadu, though having the third highest caseload in the country, does not carry the same weight on the national situation because of the lower number of cases that it has been adding every day.

Meanwhile, the daily new infections in Chhattisgarh is nearing 4,000 now. The numbers in Chhattisgarh are growing at the fastest rate in the country right now. In the last one week, the state has seen its confirmed infections jump by almost 40 per cent. Chhattisgarh now has more than 77,000 people infected with the disease at some point. And more than 50 per cent of its confirmed caseload is currently active, because a lot of these have been detected only in the last few days.