Republic Day 2023 to feature 23 tableaux from Assam, Jammu & Kashmir, more: How are they selected?

Every year, around September, the Defence Ministry initiates the process to decide the tableaux by asking all the states, the Union Territories, Central Government departments, and a few constitutional authorities to send their tableau proposals. 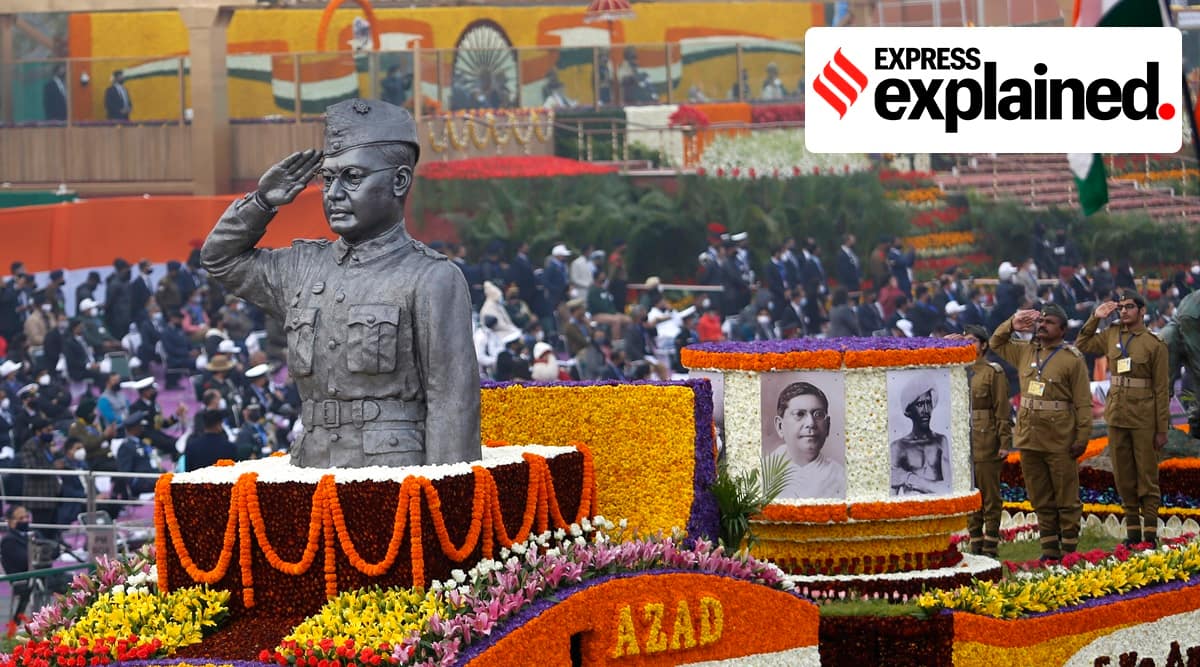 A photo of the 2022 Republic Day parade in Delhi. The themes given for tableaux this year were around 75 years of India’s Independence, the International Year of Millets and ‘Nari Shakti’. (Express photo by Praveen Khanna)
Listen to this article
Republic Day 2023 to feature 23 tableaux from Assam, Jammu & Kashmir, more: How are they selected?
x
00:00
1x 1.5x 1.8x

The Minister of Defence on January 22 announced that 17 states and union territories, such as West Bengal, Assam, Arunachal Pradesh, Tripura, and Jammu & Kashmir, will display their tableaux at Kartavya Path for the Republic Day parade.

In a statement, the ministry mentioned that apart from the states and union territories, six of the ministries and departments will also display their tableaux.

“Twenty-three tableaux — 17 from states and union territories and six from various ministries and departments — will be displayed, and will depict the nation’s rich cultural heritage, economic progress and strong internal and external security,” the Defence Ministry said.

The process to decide the tableaux, and who can participate

Every year, around September, the Defence Ministry, which is responsible for the Republic Day parade and the celebrations, initiates the process to decide the tableaux by asking all the states, the Union Territories, Central Government departments, and a few constitutional authorities to send their tableau proposals.

This time, the Defence Ministry sent letters on September 1 to the 81 Union Ministries and departments, all 36 states and Union Territories through their secretaries, and the Election Commission and the Niti Aayog, inviting them to participate.

The deadline for sending the proposal was September 30, 2022, and the shortlisting of the proposals began around the second week of October.

Guidelines on what can be depicted

The participants have to showcase elements relevant to their state/ UT/ department, within the overarching theme. The themes given to participants this year were around 75 years of India’s Independence, the International Year of Millets and ‘Nari Shakti’.

The Defence Ministry also shares the basic guidelines about what all the tableaux can or should include. The participating entities must engage “young qualified designers from renowned institutions”, electronic display walls for a bright display of images or content, moving elements using robotics or mechatronics, 3D printing could be used for certain elements, use of augmented or virtual reality, and special effects to improve the optics and visual effects of the tableau.

The tableaux of two different states/ UTs must not be too similar, as the tableaux, together, should showcase the diversity of the country. It cannot have any writing or use of logos, except for the name of the state/ UT/ department, which should be written in Hindi on the front, English on the back, and a regional language on the sides.

The Defence Ministry also asked the participants to use eco-friendly material for the tableaux, and avoid the use of plastic or plastic-based products.

How are the tableaux selected?

For the selection process, the Defence Ministry constitutes a committee of “distinguished persons” from fields like art, culture, painting, sculpture, music, architecture, choreography, etc, who help in shortlisting the tableaux from the proposals.

First, the submitted sketches or designs of the proposals are scrutinised by this committee, which can make suggestions for any modifications in the sketch or design. The sketch should be simple, colourful, easy to comprehend and should avoid unnecessary detail. It should be self-explanatory, and should not need any written elaboration.

If there is a traditional dance involved with the tableau, it should be a folk dance, and the costumes and musical instruments should be traditional and authentic. The proposal should include a video clip of the dance. Once approved, the next stage is for the participants to come up with three-dimensional models for their proposals, which are again examined by the expert committee for final selection, taking into view several criteria.

In making the final selection the committee looks at a combination of factors, looking at the visual appeal, impact on the masses, idea/ theme of the tableaux, degree of detail involved, and accompanying music, among other factors.

The committee meets for around half a dozen rounds over a number of days, eliminating and shortlisting the proposals as they go along. Only those who are shortlisted, are informed about the next round. The letter inviting participation stressed: “Final selection does not guarantee movement on Rajpath in the final parade, if it has not been created in terms of the final approved version during the selection round.”

The Defence Ministry recommends the participants to try and not engage any firm or fabricator that is involved in the creation of two tableaux, including their own.

Do they have to be of a particular size?

The Defence Ministry provides each participant with one tractor and one trailer, and the tableau should fit on that. The ministry prohibits the use of any additional tractor or trailer, or even any other vehicle to be part of it. However, the participant can replace their ministry-provided tractor or trailer with other vehicles, but the total number should not be more than two vehicles.

The tractor has to be camouflaged in harmony with the tableau’s theme, and the ministry stipulates a distance of around six feet between the tractor and the trailer for turning and manoeuvring. The participants can add ground elements on some tableaux, considering the theme.

The dimensions of the trailer on which the tableau will be placed are 24 feet, 8 inches long; eight feet wide; four feet two inches high; with a load-bearing capacity of 10 tonnes. The tableaux should not be more than 45 feet long, 14 feet wide and 16 feet high from the ground.