Addressing a rally in Wardha, Maharashtra, citing acquittals in the Samjhauta Express blast case, Prime Minister Narendra Modi denied there were any acts of “Hindu terror.” And that the term was coined by the Congress. We fact check. 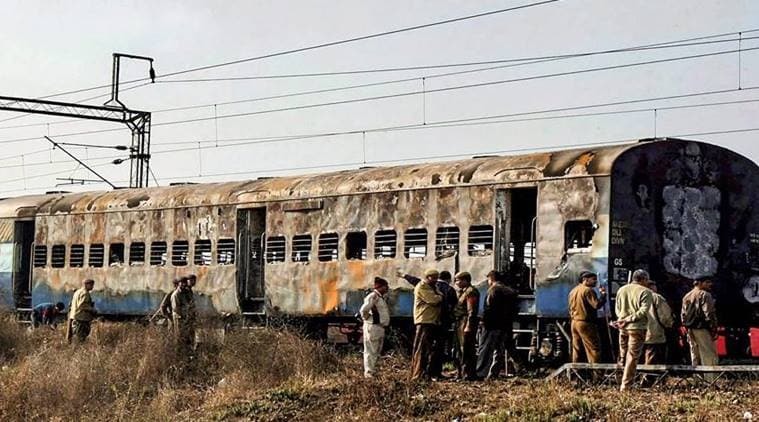 Samjhauta express blast: A total of 43 Pakistan citizens were killed in the terrorist attack. (Archive)

Addressing a rally in Wardha, Maharashtra, citing acquittals in the Samjhauta Express blast case, Prime Minister Narendra Modi denied there were any acts of “Hindu terror.” And that the term was coined by the Congress. Court records, however, contradict this.

While a trial court, indeed, cleared the accused in the Samjhauta Express blast case, it expressed “deep pain and anguish” acquitting the accused and pulled up the NIA for withholding evidence.

On March 8, 2017, an NIA special court in Jaipur convicted three ex-RSS pracharaks Sunil Joshi, Devendra Gupta and Bhavesh Patel in the 2007 Ajmer Dargah blast. Gupta and Patel were sentenced to life imprisonment in August 2017. Sunil Joshi was convicted even though he was dead.

The court said the NIA, which was prosecuting the accused, had established that Gupta had bought the cellphone SIM cards used to time and trigger the bombs kept at the Sufi shrine. It had found Joshi and Gupta guilty of planning the blasts while Patel guilty of planting the bomb.

The blast at the shrine of Sufi saint Khwaja Moinuddin Chishti in Ajmer took place on October 11, 2007.

The court acquitted RSS’s Naba Kumar Sarkar alias Aseemanand and six others in he case giving them “benefit of doubt.”

The ATS had arrested the accused in connection with an arms and explosives haul in the state earlier that year.

Calling the accused a “terrorist gang”, the chargesheet said: “The accused were members of organisations such as the (Goa-headquartered) Sanathan Sanstha, (its affiliate) ‘Hindu Janjagruti’ and similar other smaller outfits… They had drawn their motivation of making efforts towards establishment of so-called Hindu Rashtra as explained in the Marathi book ‘Kshatra Dharma Sadhana’, published by Sanathan Sanstha.”

The chargesheet said the accused “had also conspired to form a terrorist gang of youths with similar mindset to work towards undermining unity, integrity, security and sovereignty of the country.”

It was revealed during investigation that a western music programme, Sunburn, organised in Pune in December 2017 was on the radar of the “terrorist gang”, says the chargesheet which has statements of around 190 witnesses.

“The terrorist gang had planned to use country-made bombs, petrol bombs, firearms and engage in heavy stonepelting in order to send a strong message to the followers of western music and culture, and terrorise the minds of all those who would attend the said programme,” it said.

In the Samjhauta Express acquittal, the special court in Panchkula pulled up the NIA for a string of alleged discrepancies in the investigation. From not bringing on record the CCTV footage at the railway station to not getting a test identification parade of the accused by the Indore tailor who allegedly stitched the covers of the suitcases in which bombs were kept.