Addressing his eighth Independence Day address, PM Narendra Modi virtually prophesized next 25 years till the centenary year of Independence as ‘Amrut Kal’, during which India will transform itself to newer heights. 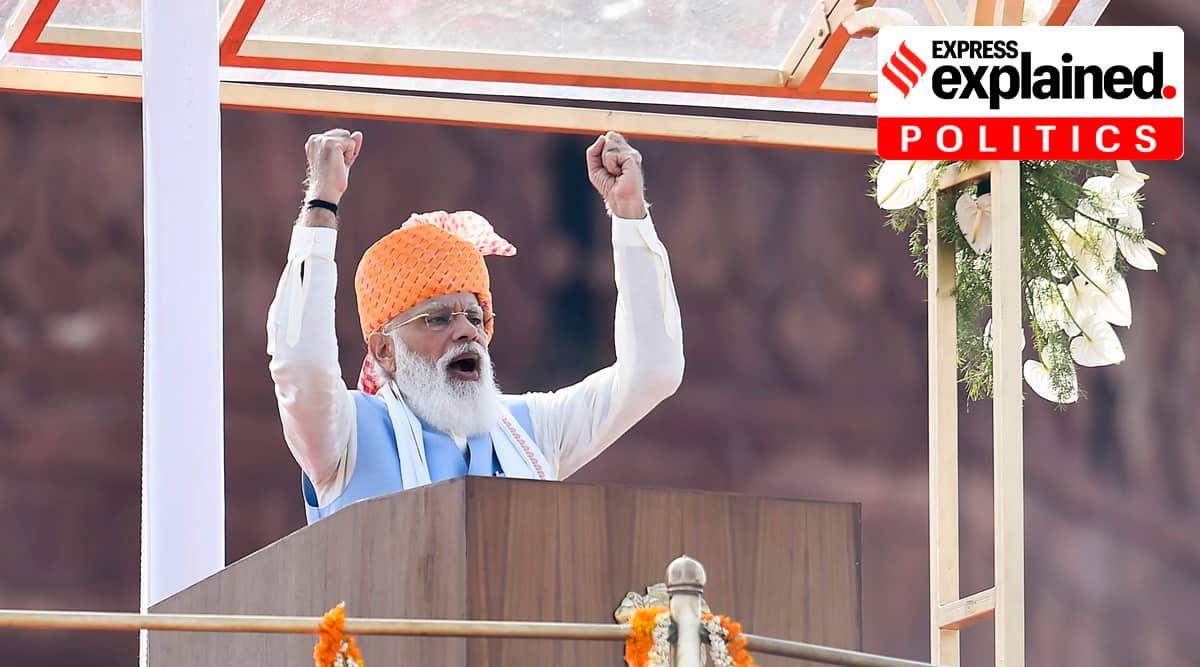 Prime Minister Narendra Modi raises slogans while addressing the nation from the ramparts of the historic Red Fort during the 75th Independence Day function, in New Delhi (PTI)

On the 75th anniversary of India’s Independence, Prime Minister Narendra Modi pitched for the country’s transformation to newer heights, new levels of prosperity, world-class modern infrastructure, and access to quality facilities for all Indians irrespective of the region and class they belong in the next 25 years.

However, he reminded the citizens that a resolve means nothing without the efforts to back it. “A resolve will remain incomplete till it is not matched with valour and hard work. Therefore we have to achieve all our resolves through ultimate valour and hard work,” Modi said from the ramparts of the the Red Fort.

Addressing his eighth Independence Day address, Modi virtually prophesized next 25 years till the centenary year of Independence as ‘Amrut Kal’, during which India will transform itself to newer heights. “25 years of Amrut Kaal. We should not wait for that long to meet our goals. We must set out for this immediately. Yehi samaya hai, sahi samay hai… (this is the time, the right time) We should change ourselves according to the changing world. We will work with the motto of Sabka saath, sabka vikaas, sabka vishwas aur sabka prayaas,” Prime Minister said adding that country should aim to achieve new levels of prosperity and ensure that the quality of access to facilities are not different in urban and rural areas; and government should not be an impediment for public and country should have modern infrastructure which is no less than world standard.

In this context, he appealed to governments at every level to bring down compliance burdens for citizens in a mission mode. 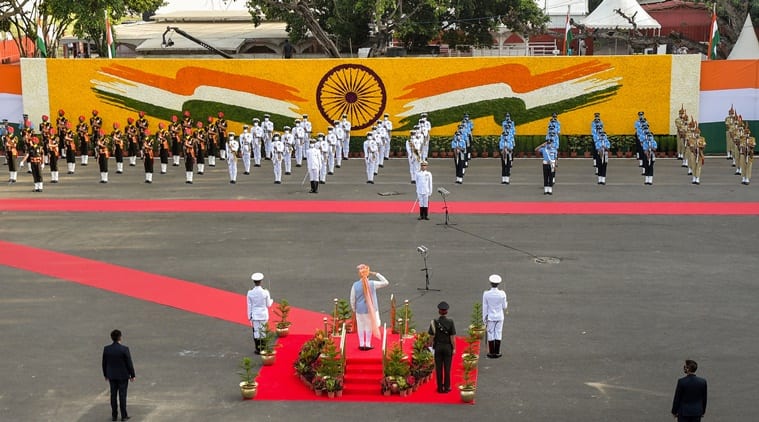 At a time when his government has come under fire for the alleged snooping using the Pegasus spyware, the Prime Minister intensely pitched for reduced role of the government in citizens’ life. “We want such an India where the governments do not interfere in the lives of the citizens,” he said.

He also assured that his government is working for freeing people and system of the archaic laws. “Earlier, the govt was sitting in the driver’s seat. Maybe it was needed at that time. But the time has changed now. Efforts have increased in the last seven years to free the people from the web of unnecessary laws and procedures. Several unnecessary laws have been scrapped so far. Our priority will be to ensure that the services reach the last person seamlessly. For the all-round development of the nation, it is essential to end the unnecessary interference of govt and government procedures in the lives of people,” he said.

While “Atma-Nirbhar” (self-reliant) economy was one of the main themes of his Independence Day speech last year, it was not as much this time. In its place, Prime Minister speech today sought to appeal to the economic agents in the country to aim for “world class” and “next generation” targets for the global economy as it reshapes after the pandemic. 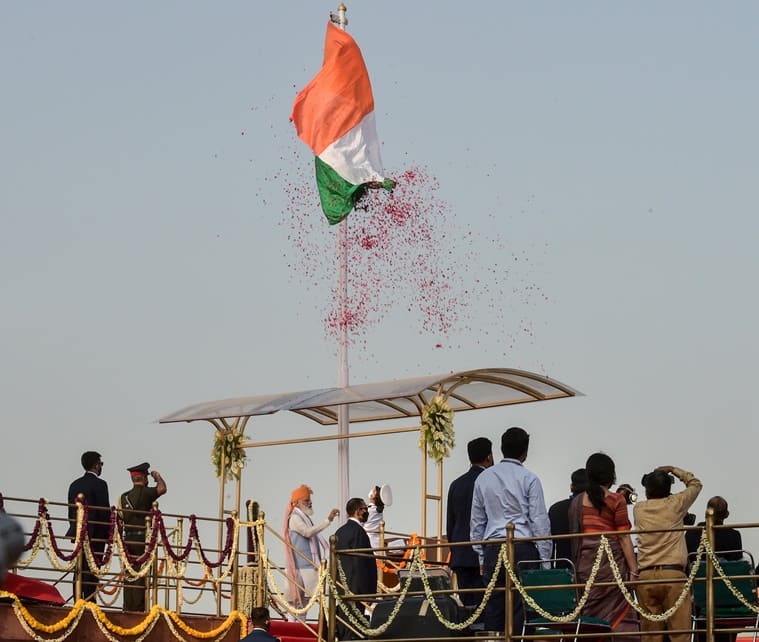 Against this backdrop, he urged Indian manufacturers to produce world-class goods in the new economy and assured government support in their endeavors to break new grounds in the global economy. “Every product is a brand ambassador. It should give them (users abroad) pride. You should dream to capture global market. Government is with you in every way,” Prime Minister said.

He also reiterated the slogan he had introduced during his first tenure as the Prime Minister. “A time comes in the development journey of every country when that nation defines itself from a new end, when it takes itself forward with new resolutions. Today, that time has come in India’s development journey. ‘Sabka Saath, Sabka Vikas, Sabka Vishwas‘. Now, ‘Sabka Prayas’ (everyone’s effort) is important for the achievement of all our goals,” Modi said. He further added: “Development should be inclusive. Whether it is our eastern India, North East, Jammu and Kashmir, Ladakh including the entire Himalayan region, be it our coastal belt or tribal region, it will become a big base for India’s development in future.”

Prime Minister Narendra Modi waves at the audience during the 75th Independence Day function at the historic Red Fort, in New Delhi (PTI)

PM Modi reasoned that the saturation level target will cut down corruption of during the implementation of these schemes. While some of the scheme, say like bank account, may mean universalisation of bank accounts, it does not mean universalisation of every welfare scheme but only saturation of those eligible under the criteria for each welfare scheme.

The Prime Minister also highlighted the vision for new Cooperative Ministry created after the Cabinet reshuffle and assured small farmers that the government was working for their welfare. “Chhota Kisaan, Bane Desh ki shaan (small farmers become the pride of the nation) …this is our dream,” Prime Minister said. “In years to come, we have to further increase the collective strength of small farmers of the country, we will have to provide them new facilities. ‘Kisan rail’ runs on more than 70 rail routes of the country today,”he said adding: “In the coming years, we will have to increase the collective power of the small farmers of the country. We have to give them new facilities. They must become the country’s pride.”

In new initiatives, the Prime Minister announced launch of 75 new Vande Bharat Trains in next 75 weeks; nutrient fortified rice through under welfare schemes like public distribution system and mid-day-meal scheme; Green Hydrogen Mission and girl students’ entry in every Sainik School among others. “Along with modern infrastructure, India also needs to adopt a holistic approach in infrastructure construction. We will soon be launching Prime Minister’s Gatishakti – National Master Plan soon. The scheme will transform India and help create jobs for the youth,” Modi said.

Even as these issues formed the major part of his speech, the issue of international relations and in particular developments along the border did not get as much attention. As far as the military stand-off with China along the LAC is concerned, the Prime Minister virtually repeated last year’s formulation that India has resolutely stood against “terrorism and expansionism” and will counter them effectively. There was no reference to the situation in Afghanistan which is now a major geopolitical challenge in our immediate neighborhood.

Kangana Ranaut enjoys day out with ‘kiddie’ Prithvi at water park: ‘Not a water person, but that’s what love is about’