This is the first confirmed instance of the war in Ukraine having caused casualties directly in another country. 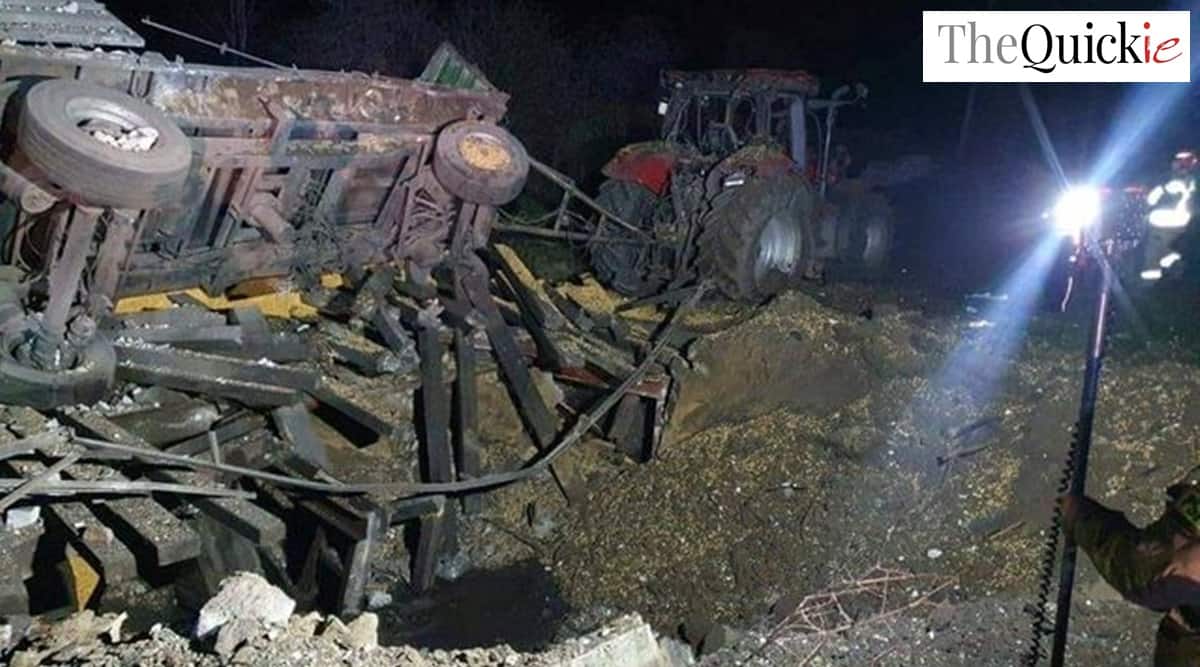 Damages after an explosion in Przewodow, a village in eastern Poland near the border with Ukraine. (Photo via Reuters)

Two Polish citizens have been killed after a missile landed in eastern Poland about 15 miles from the country’s border with Ukraine, Western media are reporting. This is the first confirmed instance of the war in Ukraine having caused casualties directly in another country.

So is Russia attacking Poland now?

The circumstances of the explosion are not clear. It is also not known who fired the missile, and from where.

A statement from the Polish foreign ministry initially said the missile was Russian-made. President Andrzej Duda first told reporters it was “most probably” Russian-made and that its origins were still being verified. He later said there was no concrete evidence of who fired it, and the incident was a one-off, reported Reuters.

“We are acting with calm. This is a difficult situation,” Duda told reporters. He said Poland was raising its level of military preparedness.

Later, however, The Associated Press, quoting US officials, reported that the missile was fired by Ukrainian forces at an incoming Russian missile.

Wait, so it was a Ukraine missile?

President Joe Biden, who is in Bali for the G20 summit, has said early information suggests the blast may not have been caused by a missile fired from Russia.

Biden, however, has promised “full US support for and assistance with Poland’s investigation,” and “reaffirmed the United States’ ironclad commitment to NATO”, the AP report added. He also convened an emergency meeting of the Group of Seven and NATO leaders in Indonesia for consultations on the situation in Poland.

Biden also said Jens Stoltenberg, Secretary General of NATO, is meeting the envoys of the NATO countries in Brussels.

What has Russia said on the missile in Poland?

Russia has denied it fired the missile. Its defence ministry called reports “a deliberate provocation aimed at escalating the situation”, reported Reuters. Kremlin spokesperson Dmitry Peskov, meanwhile, said he had no information on an explosion in Poland.

Why is a Russian attack on Poland —if it was indeed, Russia — a big deal?

It is a massive and dangerous escalation. This is because Poland is a member of NATO, and under the terms of the treaty, an attack on one NATO member is considered an attack on all. NATO can then intervene against the aggressor, militarily if needed.

Ukrainian President Volodymr Zelenskyy described it as “a very significant escalation” of the war.

So what will happen now?

The New York Times is reporting that President Duda has said it is “highly probable” that he would ask for the activation of NATO’s Article 4, under which members of the treaty discuss their response when one of them is threatened.

The official handle of the Polish president tweeted a message that reads, according to a Google translation: “President @AndrzejDuda: I informed @jensstoltenberg, @POTUS, @RishiSunak and @OlafScholz that our ambassador will participate in the North Atlantic Council and that it is highly probable that he will request the activation of Article 4, i.e. allied consultations.”

Jens Stoltenberg is Secretary General of NATO, POTUS refers to President Joe Biden, and Rishi Sunak and Olaf Scholz are the Prime Minister of the UK and Chancellor of Germany, the two most important members of NATO in Europe.

And what exactly does Article 4 of the NATO charter say?

It says member states “will consult together whenever, in the opinion of any of them, the territorial integrity, political independence or security” of another member is threatened. It sets out a mechanism for NATO members to “to exchange views and information, and discuss issues prior to reaching agreement and taking action,” according to the NATO website. “It also gives NATO an active role in preventive diplomacy by providing the means to help avoid military conflict.”

So Article 4 is about talking, not intervening?

Yes. Member states are not under obligation to carry out follow-up action, even though such deliberations can lead to a decision to take military action.

Article 4 has been invoked seven times since NATO was established in 1949, according to a report in The Washington Post. Latvia, Lithuania, Poland, Bulgaria, the Czech Republic, Estonia, Romania and Slovakia recently invoked it hold consultations over the Russian invasion of Ukraine.

And Turkey invoked Article 4 in 2015 after a suicide bombing killed around 30 people on its border with Syria. NATO had then issued a strong condemnation, but had left it at that.

And how can NATO intervene, then?

That’s under Article 5 of the NATO charter. That provision says NATO members “agree that an armed attack against one or more of them in Europe or North America shall be considered an attack against them all”, after which each member must take “such action as it deems necessary, including the use of armed force, to restore and maintain the security of the North Atlantic area”.

This article authorises NATO to launch an armed response, but the language of the treaty is broad, and there is scope for other types of response as well. It is not immediately clear what those can be.

NATO has invoked the Article 5 clause only once — that was after the 9/11 terrorist attacks on America, and NATO forces went into Afghanistan in response.

(With inputs from AP, Reuters)

Subscriber Only Stories
View All
Monthly plan to access Budget
First published on: 16-11-2022 at 09:02 IST
Next Story

Seniormost Sena MP by his side, Shinde may pull ahead in battle for party control