Why did India’s largest IPO end its first trading day at a discount of 27% on the issue price, and hitting the lower circuit? What do Thursday's market developments foretell for coming offerings? 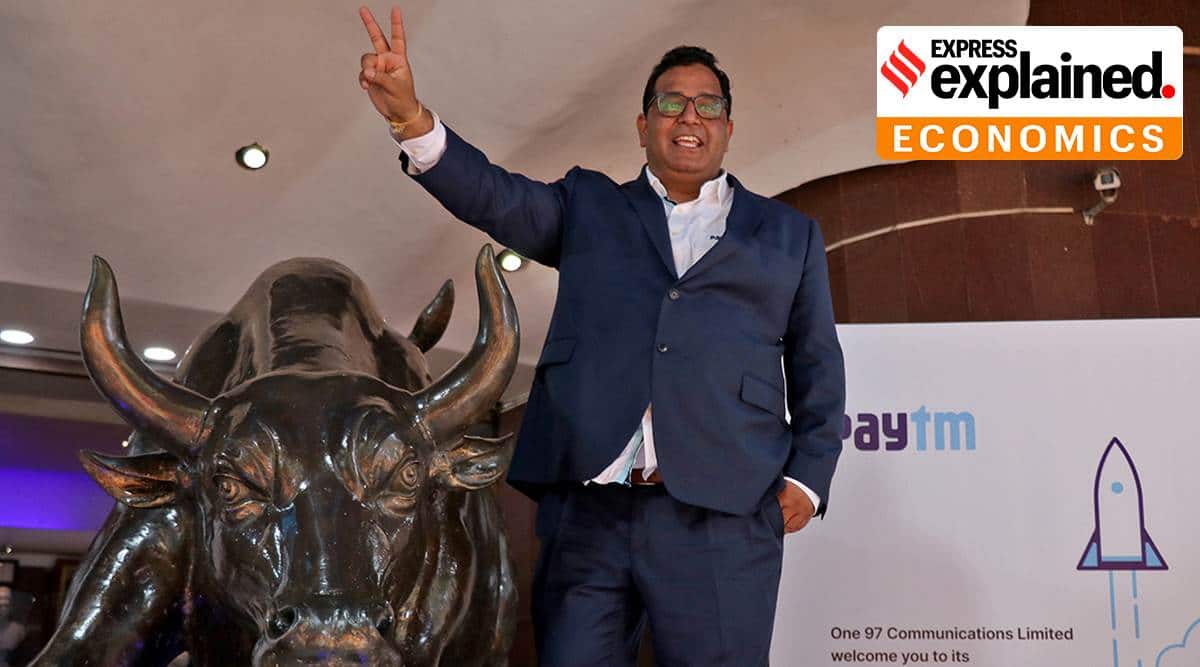 India’s largest initial public offering (IPO) that raised Rs 18,300 crore from investors lost almost a fourth of its valuation on listing day. Fintech app Paytm’s parent company One 97 Communications Ltd ended its debut trading day at a discount of 27.24% on the issue price of Rs 2,150 per share — with a shadow over both the firm’s IPO pricing and the dream run of tech companies in public markets this year.

What happened with Paytm on Thursday?

At the current price, the firm’s market capitalisation works out to Rs 1,01,399 cr, as against market expectations of a Rs-1,40,000-cr valuation. In dollar terms, this works out to nearly $13.65 bn — significantly less than the $16 bn at which it last raised money privately in November 2019.

Why did the stock perform poorly?

According to market participants, an inflated valuation and large float were mainly responsible. Institutional investors have flagged concerns with the company’s growth prospects, considering the absence of a licence to enter the lending business — one of the most lucrative verticals in the fintech space — and the intense competition in the segments of Paytm’s operation.

Macquarie Research noted on Thursday that Paytm’s valuation was “expensive” — 26 times its estimated price-to-sales ratio for 2022-23, when the global benchmark is 0.3-0.5 times the price-to-sales growth ratio for fintech firms.

Also, stock analysts have pointed out that the valuation of the company has traditionally been decided by foreign investors with a higher risk appetite, whereas Indian public markets decide based on conventional profitability and earnings metrics.

Indications of a poor debut were also visible in the slower subscription of the public offering — the issue was fully subscribed only on the last day at 1.51 times, with the retail portion being booked 1.62 times. The grey market dealing ahead of the scrip’s listing pointed to a significant discount upon listing.

Analysts also said that the offering left nothing on the table for investors — with those receiving the company’s shares in the IPO allotment sitting on huge losses. A large chunk of the money raised through the offering — around Rs 10,000 cr — went to existing investors who exited their stake partly or entirely.

“As much as 75% of promoters are from other countries and are selling stakes by offer for sale (OFS) worth Rs 10,000 cr which is more than 50% of IPO value. It’s not a market leader in any business,” said Manoj Dalmia, founder and director, Proficient Equities Pvt Ltd.

Also, stock markets, which appeared to be in a long-term bull phase until recently, have been sluggish of late amid fears of a rise in inflation and interest rates, and the withdrawal of accommodative monetary policy by central banks. The excess liquidity in the system has been a major catalyst fuelling the recent IPO frenzy.

Will other IPOs be impacted?

“Markets will punish overpriced IPOs,” said veteran BSE broker Pawan Dharnidharka. “When the share price trades at a discount of 20% on the listing day, that’s a clear sign that promoters should not fleece investors. Issuers should leave some profit for investors while listing the shares.”

Among recent IPOs, the offering of FSN E-Commerce Ventures, the company behind Nykaa, was subscribed more than 82 times at the end of the final day of bidding. The company listed at a 79.4% premium on the IPO price of Rs 1,125. The offering of P B Fintech, the parent of insurance-tech company Policybazaar, was oversubscribed by 16.6 times on the final day of bidding on November 3. The scrip listed at Rs 1,150 on debut, a premium of 17.35% above the issue price on the NSE.

What are the downside risks to Paytm?

Analysts have noted that Patym is only a leader in the online wallets segment, which is losing market share as more and more people are opting for UPI-based payments to directly transfer money from their bank accounts.

“Dabbling in multiple business lines inhibits Paytm from being a category leader in any business except wallets, which are becoming inconsequential with the meteoric rise in

UPI payments,” Macquarie Research said — also noting that commissions on transactions from the wallet business were likely to be driven down by competition and regulation.

Analysts have also said that Paytm’s ability to improve profitability through distribution of financial products such as loans, mutual funds, and insurance will come under pressure from competition and regulation.