Explained: What the US leaving the Paris Accord means, and how a Biden presidency could rejoin

After the US formally withdrew from the Paris Climate Agreement Wednesday, Joe Biden vowed to rejoin if voted to power. What is this the landmark accord, why did the US exit it, and how can Biden rejoin? 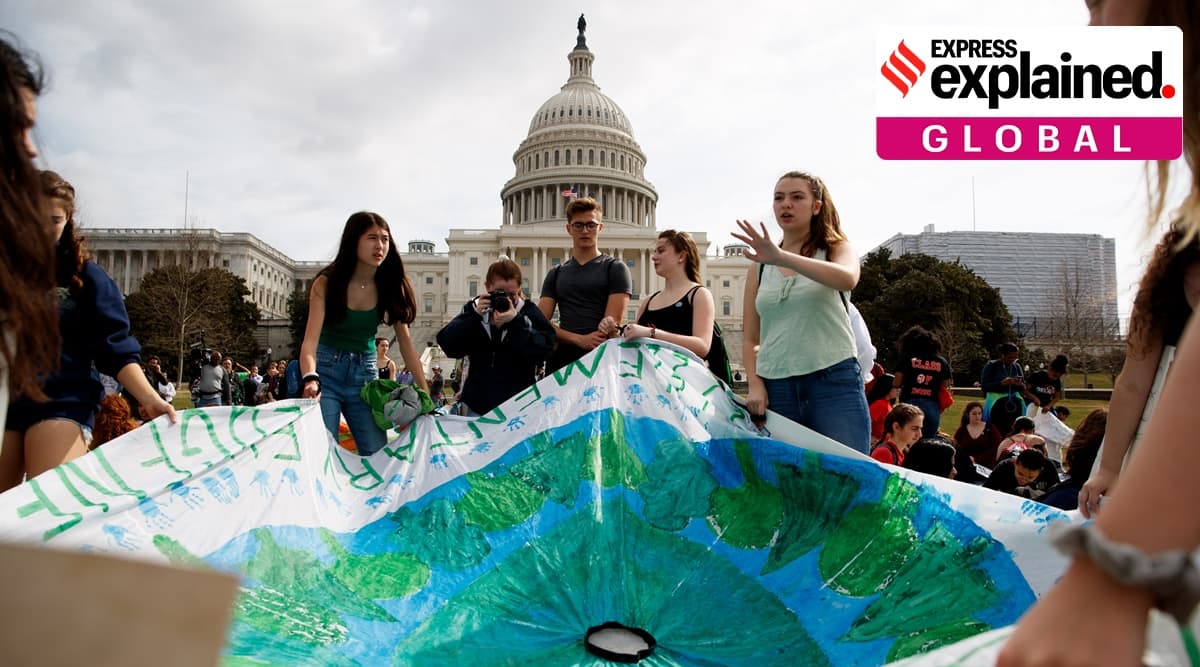 The United States on Wednesday formally left the Paris Climate Agreement, three years after President Donald Trump announced his intention to undo what had been seen as a key achievement of his predecessor Barack Obama.

The same day, Democratic presidential hopeful Joe Biden, who has expressed confidence about winning the 2020 election, announced that his administration (if elected), would rejoin the landmark accord in 77 days — on January 20, 2021, the day the country’s next president gets inaugurated.

Today, the Trump Administration officially left the Paris Climate Agreement. And in exactly 77 days, a Biden Administration will rejoin it. https://t.co/L8UJimS6v2

What is the Paris Agreement?

This basically means that the countries would try to limit the increase in global temperature rise. While poor countries and island states had requested a lower goal considering threats of droughts and sea-level rise, climate experts have said maintaining a 2 degrees increase will be a challenge in itself. The agreement came into force on November 4, 2016.

Another crucial point in this agreement was the decision to limit the amount of greenhouse gases emitted by human activities to a level that can be naturally absorbed by trees, soils and oceans. Nations have pledged “to achieve a balance between anthropogenic emissions by sources and removals by sinks of greenhouse gases in the second half of this century”. Climate experts told The Guardian that this meant attaining “net zero emissions” between 2050 and 2100. According to the UN’s climate science panel, net zero emissions must be attained by 2070 to avoid dangerous warming.

Developed countries were also told to provide financial resources to help developing countries in dealing with climate change and for adaptation measures. As part of a review mechanism, developed countries were also asked to communicate every two years the “indicative” amount of money they would be able to raise over the next two years, and information on how much of it would come from public financial sources. In contrast, developing countries have only been “encouraged” to provide such information every two years on a voluntary basis.

A key feature of the Paris Agreement has been the way the agreement reflects the principle of ‘common but differentiated responsibilities’ (CBDR), which has been invoked four times in the CBDR principle. Emerging nations stressed on the developed world to take greater responsibility for climate actions since they are largely responsible for emitting almost all of the greenhouse gases from about 1850 to the 1980s.

The agreement also includes a mechanism to address financial losses faced by less developed nations due to climate change impacts like droughts, floods etc. However, developed nations won’t face financial claims since it “does not involve or provide a basis for any liability or compensation”.

Also in Explained | How the US counts its votes in the presidential election, and why it’s taking so long

Climate activists hold signs at a protest during the 2020 presidential election in Washington, DC, US, on Wednesday, Nov. 4, 2020. (Bloomberg Photo: Eric Lee)

So, why did the US leave the Paris agreement?

During his 2016 presidential campaign, Donald Trump had described the Paris Agreement as “unfair” to US interests, and had promised to pull out of the agreement if elected. Trump had also sought to portray that election as a referendum on the policies of former President Obama, who had played a pivotal role in stitching together the complex and far-reaching agreement.

So in June 2017, months after his inauguration, Trump announced his government’s decision to quit the accord. Environmentalists fiercely criticised the move, saying that America’s exit would seriously jeopardise the agreement’s objective of keeping the global temperature rise to within 2 degrees Celsius from pre-industrial times, especially since the US was (and still is) the world’s second-largest emitter of greenhouse gases.

The US could not immediately exit the Paris Agreement, however, as United Nations rules permitted a country to apply for leaving three years after the accord came into force, i.e. November 4, 2019. The US formally applied to leave on that day, and the departure automatically came into effect on November 4, 2020, at the end of a mandatory year-long waiting period. 📣 Express Explained is now on Telegram

If he wins, how can Joe Biden rejoin the Paris accord?

Democratic presidential nominee Joe Biden has long maintained that the US should commit to policies addressing climate change, and during his campaign proposed a $2 trillion spending plan that includes promoting clean energy and climate-friendly infrastructure.

Biden on Wednesday announced that upon election, his administration would rejoin the Paris treaty on its first day in office– January 20, 2021. To do so, the US would have to formally inform the United Nations Framework Convention on Climate Change (UNFCCC), the body which created the Paris accord, about its intention to rejoin.

Thirty days after formally applying to the UNFCCC, the US would again become a part of the Paris framework, and would be required to submit its emission-reduction targets for 2030.

A possible American re-entry in the WHO

Apart from the Paris agreement, a Biden administration is also widely expected to rejoin the World Health Organisation, the UN’s health arm which has played a guiding role for the world during the coronavirus pandemic. Trump had announced Washington’s intention to leave the WHO in May this year after accusing the body of having undue deference to China.

In July, the US formally informed UN Secretary-General Antonio Guterres of its intention to leave which unless revoked by Biden would take effect July 6, 2021, after the completion of a one-year notice period.

The US, a founding member of the WHO as well as its biggest donor, has long exercised a strong influence over the organisation. It has played a key role during the 2014 Ebola epidemic, the humanitarian response in Afghanistan and Iraq, combating the HIV/AIDS epidemic, and efforts to eradicate polio and tuberculosis, among several other achievements.

Don’t miss from Explained | Likelihood of future pandemics, their damage potential, as per a new report

IPL 2020: When and where to watch Mumbai Indians vs Delhi Capitals