Not cow but mithun, a sign of ‘serious’ trouble in Arunachal Pradesh

Striking similarities aside, the mithun is far removed from a cow. Mithuns are indigenous to the Northeast, particularly Arunachal Pradesh.

The mithun is not a cow. Arunachal Pradesh Governor Jyoti Prasad Rajkhowa thought it was one, so when he saw a mithun being slaughtered outside Raj Bhavan, he called it “cow slaughter” and cited it as a sign of collapse of law and order in the state. He also attached photos of the “cow” while recommending President’s rule in Arunachal.

Striking similarities aside, the mithun is far removed from a cow. It’s a bovine species found in northeastern states such as Nagaland, Manipur and Mizoram, and also in parts of China, Bhutan, Myanmar and Bangladesh. Outsiders to Arunachal have wondered why cows look so different and big in this part of the country.

The mithun, Bos frontalis, often referred to as ‘the cattle of the mountains’ and ‘ship of the highland’, is considered a descendent of the wild Indian gaur or bison. Mithuns prefer cold and mild climates, and feed on forest leaves, shrubs and grass. It has a high fertility rate, producing one calf every year. An adult mithun weighs between 400 and 600 kg and its productive life ranges from 16 to 18 years. It is currently reared under ‘free-range conditions (allowed to graze in the open, without restrictions)’ in shrubby hill forests at altitudes ranging from 1,000 to 3,000 m above mean sea level.

The mithun is sacred to the Nyishi, Apatani, Galo, Adi, Mishmi, Sherdukpen and other communities of the state. Like the cow is to many in the rest of India, some would say. That’s precisely where the mithun differs from the cow. Mithun meat is widely available in Arunachal and sells at Rs 300 to Rs 400 a kg in Itanagar. The meat is considered better than that of other bovine species.

An average mithun produces only about 1-1½ litres of milk a day, but it is considered to be nutritionally superior than cow or goat milk. It contains high fat (8 to 13%), solids-not-fat (18 to 24%) and protein (5 to 7%). Due to its high protein and fat content, mithun milk is used to make paneer, ghee, cream, curd, cheese and sweets. ICAR’s National Research Centre on Mithun, located at Jharnapani in Nagaland, has successfully standardised the process of making paneer, barfi, rosogulla, curd and lassi from mithun milk. 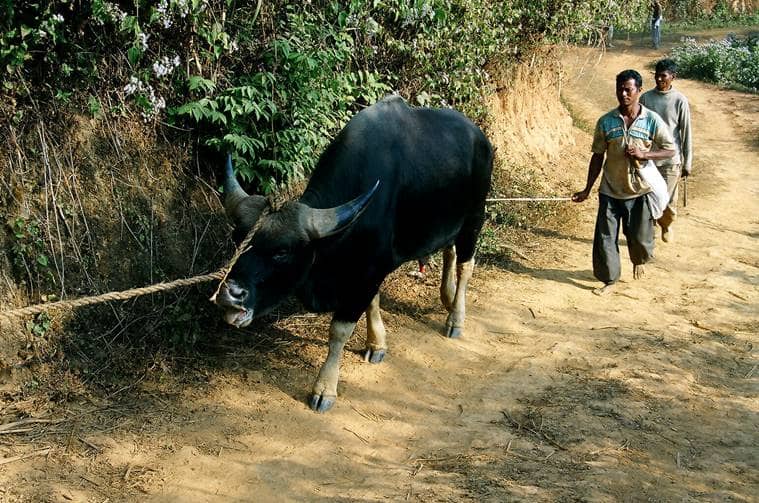 The mithun is sacred to the Nyishi, Apatani, Galo, Adi, Mishmi, Sherdukpen and other communities of the state. Aditya Kabir/WikiMedia Commons

In his book Emerging Religious Identities of Arunachal Pradesh: A Study of the Nyishi Tribe, academic Nabam Tadar Rikam has said that while most tribal communities of the Himalayan state rear mithuns, it is the “most valued and sacred animal” for the Nyishi community. Traditionally, the mithun figures prominently in the pantheon of powerful deities the Nyishis worship. According to Rikam, “Though every Nyishi family possesses mithuns in varying numbers, owning mithuns naturally adds to a person’s social status and stands good for those who are in shortage of foodgrains as it can be used for barter. Mithuns are a must in marriages, as it is the only medium of payment of bride price. Moreover, mithuns are considered sacred because mithun sacrifice is compulsory in all ceremonial rituals.”

According to Kago Gambo, who teaches political science at the Dera Natung College in Itanagar, mithun is akin to gold for some Arunachali communities, commanding the highest value in the barter system.

While almost every community in Arunachal uses the mithun for sacrifice, the Adis in particular believe that such a sacrifice appeases the soul of the dead. In a recent article in the Economic and Political Weekly, Gambo wrote the mithun is a symbol of “peace and communal harmony” and its sacrifice is said to usher in the prosperity and well-being of those for whom the act is intended. That makes the “cow slaughter” outside Rajkhowa’s residence harder to interpret.

Thanks to gradual denudation of free-range areas, coupled with climate change, the mithun is under serious threat in Arunachal. Scientists at the National Research Centre on Mithun have said grazing with cattle has increased chances of crossbreeding, leading to a gradual loss of “species uniqueness” and fitness traits. The All India Livestock Census of 2007 put India’s mithun population at 2.64 lakh of which 82 per cent were in Arunachal alone. The annual growth rate is only 6.5%, scientists said. A couple of years ago, scientists at the centre carried out an embryo transfer, leading to the birth of Mohan, the first mithun calf born through this process.

Maharashtra looks to reserve 20% of its industrial plots for SCs, STs