Muslim women of age 20-34 remain most vulnerable to divorce: Census

Muslim women have one of the highest divorce rates in India, well above the national average; Hindu numbers generally below national mean. 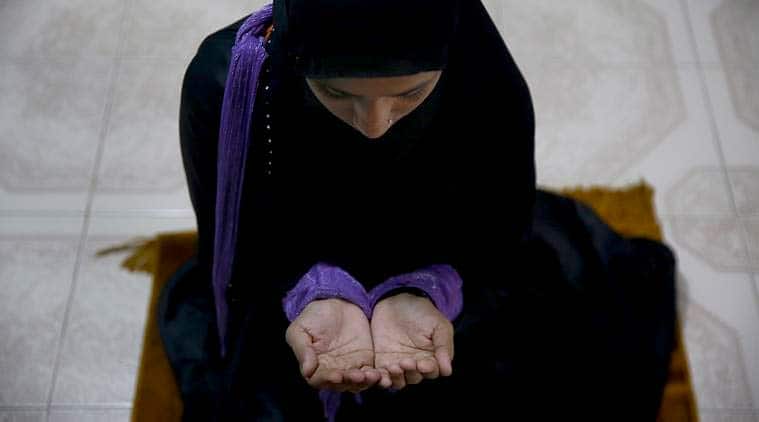 The Census data, which list the marital status of individuals from all religious communities, shows that the refined divorce rate — or the number of divorces per 1,000 marriages — for Muslim women was 5.63, well above the national average of 3.10. (Representational image)

The rates of divorce of Muslim women is one of the highest among all religious communities in India, Census 2011 figures released last week show. The Census figures also suggest that among all married Muslim women, those between the ages of 20 and 34 were the most likely to be divorced — a proportion that is higher than in any other religious community in the same age group.

The vulnerability of Muslim women to arbitrary divorce — the infamous ‘triple talaq’ — has been part of the public discourse in India for long, entwined inextricably with the issues of the independence of Muslim personal law and the Uniform Civil Code favoured by Article 44 of the Constitution. On occasions such as the Shah Bano case of 1986, it has taken on powerful political overtones. Another victim of triple talaq, Shayara Bano of Uttarakhand, has now gone to the apex court in a quest for justice whose progress will be keenly watched in the coming months.

The Census data, which list the marital status of individuals from all religious communities, shows that the refined divorce rate — or the number of divorces per 1,000 marriages — for Muslim women was 5.63, well above the national average of 3.10.

Buddhist and Christian women had higher refined divorce rates of 6.73 and 5.67, while the number for Hindu women was only 2.60, lower than the national mean.

Nearly 44% of divorced Muslim women belong to the age group 20 to 34. This age group makes up only 24% of the total female Muslim population of India.

The Census has recorded about 13.2 lakh individuals as divorced in India — 9.09 lakh, or 68%, are women, while 4.5 lakh (32%) are men. The numbers are probably severely underreported, say activists. The refined divorce rate nationally stands at 2.3.

Which means that while divorce rates for men are lower than that for women in all communities, among Muslims, it is 3.5 times lower, as compared to 2.2 times for Buddhists and 1.9 times for Christians. Among Hindus, the rates are 1.47 per 1,000 for men, and 2.60 for per 1,000 for women. 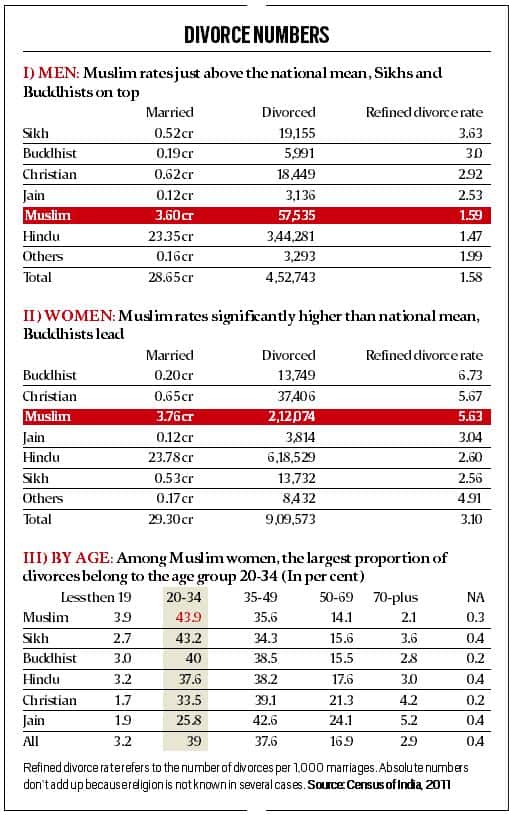 The lower rates for men in all religious communities suggest that men in general tend to remarry at a far quicker rate than women — and do not stay divorced for very long.

Activists say the high rates of divorce, and the discrepancy in divorce rates in men and women among Muslims underscores the ease with which Muslim men can divorce their wives.

“Among Muslims, marriage is not a sacrament but a contract, and it is relatively easy to get a divorce compared to other communities. However, the desertion of women is also a major issue, and it is something that is lesser in the community,” activist Flavia Agnes said.

According to activists, issues like the “oral triple talaq” must be addressed soon. “It is a known fact that Muslim women remain the most vulnerable group when it comes to divorces in the country. For long we have been seeking that oral triple talaq needs to be abolished and Muslim personal law is codified to ensure justice for women,” Noorjehan Safia, convener of the Bhartiya Muslim Mahila Andolan, said.