The dam is located in the upper reaches of the river Periyar, which flows into Kerala after originating in Tamil Nadu. The reservoir is within the Periyar Tiger Reserve. On Thursday, the Supreme Court directed that the maximum water level in Mullaperiyar dam should be 139.50 ft until November 10. The dam is at the centre of a decades-old dispute: for Kerala, where it is situated, the dam presents a threat to lakhs living downstream; and for Tamil Nadu, which controls the dam, the water it provides is the lifeline of people in five districts.

The dam is located in the upper reaches of the river Periyar, which flows into Kerala after originating in Tamil Nadu. The reservoir is within the Periyar Tiger Reserve. The water diverted from the reservoir is first used for power generation in lower Periyar (by Tamil Nadu) before flowing into the Suruliyar, a tributary of Vaigai river, and then for irrigating nearly 2.08 lakh hectares in Theni and four other districts farther away.

The Supreme Court order on Thursday came after a court-appointed supervisory committee had suggested 139.50 ft as the permissible level. The court has directed both states to go by the committee’s recommendation. Tamil Nadu had wanted the level increased to 142 ft as fixed by the Supreme Court in 2014, while Kerala wanted it within 139 ft as per a rule curve fixed until the end of the month.

What has revived the dispute is the unusual rains in the last couple of weeks, which have led to the water level inching towards its permissible level of 142 ft. On Thursday, it reached 138.15 ft. Kerala had wanted the level fixed at 136 ft, but the Supreme Court in 2014 allowed Tamil Nadu to raise it to 142 ft. 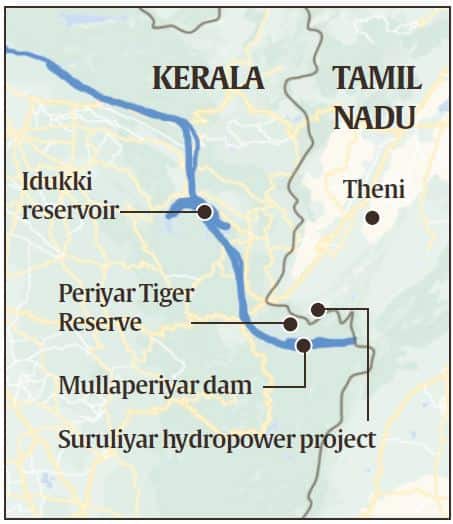 This time, while seeking a limit of 139 ft, Kerala pointed to a Supreme Court directive in August 2018 following the devastating floods in the state. One of the factors contributing to the floods was sudden discharge from the Mullaperiyar dam, after its water level went beyond 142 ft and all spillway shutters of the dam suddenly lifted. The excess water from Mullaperiyar had then flowed to downstream Idukki reservoir, which was also at maximum storage level. The unexpected flow forced Kerala to increase the discharge, leading to flooding of several parts of central Kerala.

The situation in 2021 is not different, claims the Kerala government. The Idukki reservoir, which is in the same district as the Mullaperiyar dam, was at 94% of its live storage capacity on Thursday, despite the shutters being kept opened for two weeks before they were shut on Wednesday. The overflow from Mullaperiyar would find its way to the Idukki reservoir, the government has argued.

As part of regulating the water level, Tamil Nadu has agreed to release water through spillway shutters from Friday morning. Kerala Chief Minister Pinarayi Vijayan recently wrote to Tamil Nadu CM M K Stalin to draw maximum water and release downstream water gradually to the Kerala side. Anticipating lifting of the shutters, Kerala has started evacuating families living on both banks downstream up to the Idukki reservoir, which is 35 km away.

Kerala has been demanding a new dam replacing the existing one, and located 366 ft downstream. While Kerala Governor Arif Mohammed Khan recently expressed his support to the idea, such a project would need the consent of Tamil Nadu. Construction of a new dam would also give rise to a demand for a new water-sharing treaty; at present, only Tamil Nadu has rights over the dam water.

In 1886, the then Maharaja of Travancore signed the ‘Periyar Lease Deed’ with the British government, which considered the Periyar waters useless to Travancore. It wanted to divert the water into arid regions of Tamil Nadu. The Maharaja signed the agreement after 20 years of resistance. In 1895, the dam was constructed. The Madras government started hydel power generation in 1959. Later, the capacity was increased to 140 MW.

Safety concerns around the dam date back to the early 1960s, when media reported it was unsafe. Kerala brought up the issue before the Central Water Commission in 1961. After a joint inspection by Kerala and Tamil Nadu in 1964, the water level was reduced for the first time, from 155 ft to 152 ft.

In the years that followed, Tamil Nadu witnessed public agitations demanding that the level be increased; Kerala opposed the demand.

Also in Explained |Why Karnataka govt is surveying churches, and why Christian community is opposed to it

Over the years, petitions have been filed in the high courts of both states. These were subsequently transferred to the Supreme Court. In 2000, the Centre appointed an expert committee to look into safety and suggest storage levels.

In 2006, the Supreme Court allowed Tamil Nadu to raise the water level to 142 ft. It said after completing strengthening work, the level could be restored to 152 ft if an expert committee examined and recommended it. In March 2006, the Kerala Assembly amended the Kerala Irrigation and Water Conservation Act, 2003, bringing Mullaperiyar in the schedule of ‘Endangered Dams’ and restricting its storage at 136 ft. Since then, the issue has shifted to the safety of the dam.

In 2007, the Kerala Cabinet permitted preliminary work on a new dam. Tamil Nadu approached the Supreme Court against the move. In 2010, the Supreme Court formed an empowered committee to look into the dam’s safety. In 2008, a flood routing study by IIT Delhi found the dam was unsafe; in 2009, IIT Roorkee reported the dam was in an earthquake-prone area and would not survive a major quake. In November 2011, Kerala sought the Centre’s intervention to bring down water levels to 120 ft after the area witnessed minor tremors. In 2014 came the Supreme Court order allowing Tamil Nadu to fix the water level at 142 ft.

Booking citizens for ‘cheering for Pakistan’ shows disregard for the law, Constitution