The story of the Guest House

What was the infamous incident that took place in Lucknow 24 years ago that turned the SP and BSP into sworn enemies, seemingly to never come together again? Why has that situation changed now? 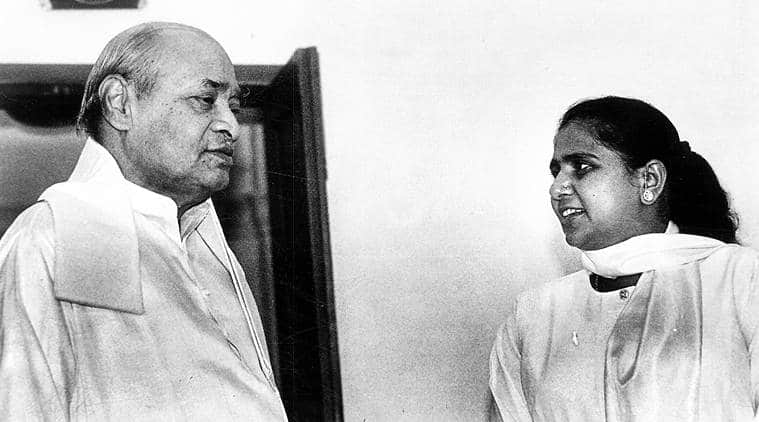 On June 1, 1995, as Uttar Pradesh Chief Minister Mulayam Singh Yadav met Samajwadi Party (SP) leaders from across the state, P L Punia, the Congress Rajya Sabha member who was then an influential IAS officer in the Chief Minister’s Office, walked in uninvited. Those present at the meeting recall that Mulayam’s manner changed as he read the note Punia handed him. The Chief Minister announced that party workers should be prepared for elections, and abruptly ended the meeting. The assembled SP district unit chiefs later learnt that Punia had come in to inform Mulayam that the Bahujan Samaj Party (BSP) was about to pull the plug on his coalition government.

Though the strains in ties had been visible for a few months, Mulayam was taken by surprise. At their meeting a couple of days earlier, BSP chief Kanshi Ram had given no indication of his plan. Their coalition government was only a year and a half old then.

Several SP leaders were of the view that an attempt should be made to break the BSP to save the government. On June 2 evening, with no explicit objection from the party leadership, some SP MLAs and district-level leaders reached the State Guest House in Lucknow, where Mayawati, Kanshi Ram’s closest aide and then general secretary of the BSP, was meeting her MLAs to discuss their next step.

What happened thereafter has since been infamously referred to as the “Guest House episode”. MLAs and workers of the SP surrounded the guest house and went on the rampage, forcing Mayawati to lock herself in a room while they detained several of her MLAs, claiming they had defected to the SP. Then BJP MLA Brahm Dutt Dwivedi, who was present, is widely believed to have stepped in protect Mayawati against possible physical assault by the SP leaders and workers. Then Lucknow SSP O P Singh, who is now the state DGP, was criticised for not taking enough steps to prevent the violence.

In a report titled ‘Mulayam’s men attack BSP legislators’ meet’, The Indian Express said in its edition of June 3: “The Samajwadi Party workers, armed with rifles and weapons, barged into a meeting room of the BSP workers… and assaulted the BSP legislators, ‘kidnapping’ some of them. Senior BSP leaders, including Ms Mayavati, slipped into a suite reserved for her in the guest house.

“The Lucknow SSP, Mr O P Singh, as well as his men, were a mute witness as the SP men snapped the telephone and power lines… and started beating [the BSP MLAs] with lathis. About 300 SP miscreants were led by over a dozen party MLAs, mostly with a criminal background.”

Under pressure from Congress leaders from UP, the P V Narasimha Rao government acted on Governor Motilal Vora’s recommendation and sacked Mulayam on June 3, without giving him a chance to prove his majority in the Assembly. Late that same evening, Mayawati took oath as Chief Minister, with outside support from the BJP and Janata Dal.
The guest house incident marked what appeared then and for long afterward to be a permanent break between the SP and BSP — seemingly fixing forever Mayawati’s outlook towards Mulayam’s party, considered the torchbearer of social justice politics in UP. The bitter parting out of which emerged India’s first Dalit Chief Minister put the SP and BSP on parallel tracks that could never meet — and the BSP went on to even partner twice with the “manuwadi” BJP, the party which it had always considered as being fundamentally opposed to the Bahujan interest. The Indian Express report on the ‘Guest House episode’.

The announcement over the weekend of the alliance between the SP and BSP has come after the two parties have been pushed into a fight for survival by the BJP. The last time they came together, 26 years ago, the initiative was taken by Mulayam — ahead of the Assembly elections of 1993, after President’s Rule imposed in the aftermath of the demolition of Babri Masjid in December 1992 ended.

Also Read: SP-BSP alliance: 80 seats — why both are banking on arithmetic

Having become Chief Minister in 1989, Mulayam had built a national reputation for toughness by his promise to secure the Babri Masjid. The October 30 and November 2, 1990 firing on kar sevaks bolstered his secular image, and was believed to have added to his appeal among Muslims. Having parted ways with the Janata Dal, however, Mulayam suffered humiliating defeat in the 1991 Assembly elections, in which his party got a mere 34 seats (12.5% votes) in the 425-member House. The kamandal (Ram Temple movement) had trumped Mandal (social justice movement) — the BJP won 221 seats; the BSP 12 (9.5% votes).

Over the years, Mulayam has recollected that his decision to ally with the BSP was a response to a provocation from BJP leader L K Advani. According to Mulayam, Advani had, during a meeting of the National Integration Council at a time the Ram Temple movement was raging, challenged his alleged “pseudo-secularism”. In response, Mulayam had reached out to Kanshi Ram to bring Mandal and Bahujan together against the BJP.

In 1993, the SP-BSP alliance polled over 29% votes and won 176 seats — the SP contesting 256 seats and got 109, and the BSP contested 164 and won 67. The BJP polled 33% of the vote and won 177 seats. As the saffron party failed to secure additional support, Mulayam became Chief Minister of the SP-BSP alliance government. The shrinking of the BJP after Kalyan Singh’s rebellion allowed the SP and BSP to emerge as the two poles of UP politics from the 2000s onward. Fed up with the SP, voters gave a full majority to the BSP in 2007; five years later, equally fed up with Mayawati’s regime, they swung back towards the SP and Akhilesh Yadav became Chief Minister.
Neither Mayawati (2009) nor Akhilesh (2014) could translate their decisive Assembly mandates into gains in Lok Sabha elections. The BJP, which had shrunk from over 33% votes in 1991 to less than 16% in the 2012 Assembly elections, rode the Narendra Modi wave to sweep UP in the 2014 Lok Sabha elections and 2017 Assembly polls.

The twin humiliations have forced the SP and BSP back on the same side. Akhilesh followed his father in taking the initiative, driving to Mayawati’s residence in March last year after SP candidates defeated the BJP in the Lok Sabha bypolls in Gorakhpur and Phulpur with BSP support. On January 4, Akhilesh made the same trip again, and this time the two parties formally decided to join forces against the BJP.

The announcement of the SP-BSP alliance, not just for the Lok Sabha elections but also for the Assembly elections of 2022, appears to have slayed the demon that was born on June 2, 1995. At least for now.