Mangaluru auto-rickshaw blast: What we know about accused Mohammed Shariq

According to the police, Shariq had been arrested in 2020 for painting 'pro-terror graffiti' on a wall in Mangaluru, and was wanted in another terror-related case from September this year. Here are the details. 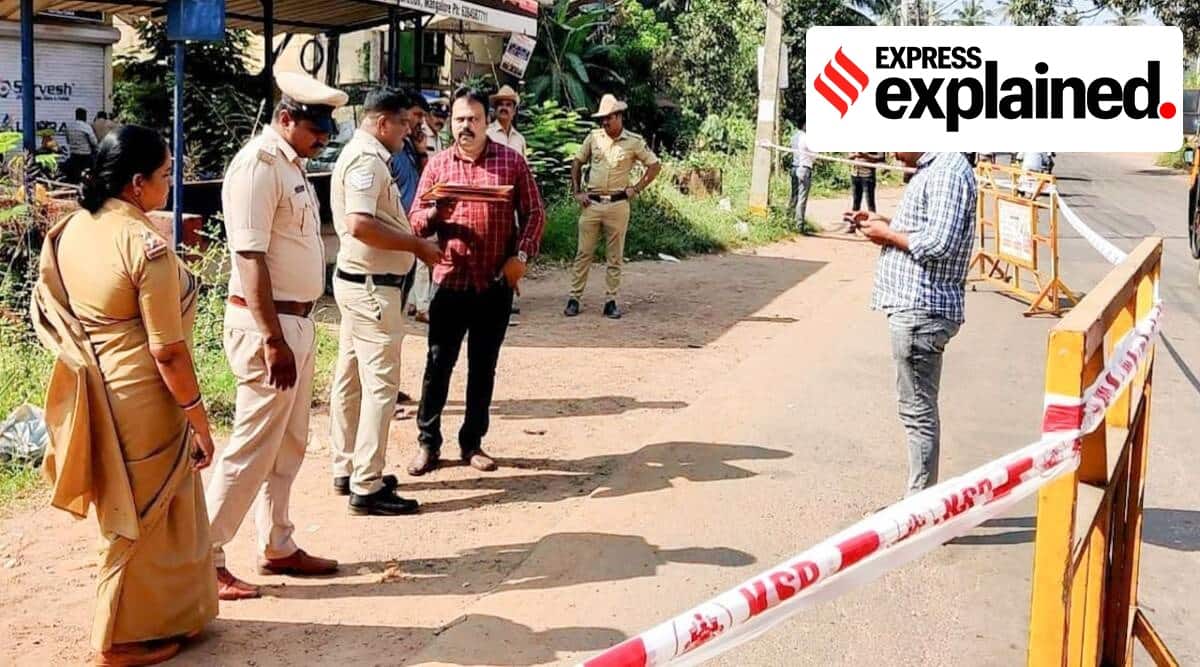 Police at the blast site in Mangaluru. (Express photo by Jithendra M)

The 24-year-old accused in the Mangaluru auto-rickshaw blast case had been living in Mysuru with fake ID papers of ‘Premraj Hutagi’, had been arrested in 2020, and the police were on his lookout in a terror-related case from September, officers have revealed.

A low-intensity bomb had gone off in an auto-rickshaw in Mangaluru on Saturday evening. While the blast was initially suspected to be an accident, it was later confirmed to have been caused by a bomb the passenger was carrying, said the police. This passenger was Mohammed Shariq, who is in the hospital now with burn injuries.

Here is what we know about Shariq and his links with radical modules.

According to the police, Shariq hails from Shivamogga district. In 2020, Shariq and an associate, Maaz Ahmed, were arrested for painting “pro-terror graffiti” on a wall in Mangaluru.

In September this year, Maaz was arrested again, with another man called Syed Yasin, by the Shivamogga police in a terror case. They are both engineers, and the police suspect were radicalised by Shariq, who was reported ‘absconding’ in the case.

The police claimed that the youths were linked to the Islamic State, were planning to carry out blasts, and had “stored material required to make explosives for the purpose”. Shivamogga SP BM Laxmi Prasad stated that Shariq had discussed “fundamental ideas and concepts of jihad” with his two associates.

The SP said Shariq used to send them PDF files, audio and video files, and links related to extremism, radicalisation, and the work of ISIS and other terror outfits through various encrypted messenger apps.

Maaz and Yasin learnt how to make bombs through these videos, assembled a bomb, and carried out an experimental blast on the banks of Tunga river in Shivamogga before they were arrested, the police said.

Police sources also said that Shariq had links with Mateen Ahmed Taha, who is said to be a member of ‘Al Hind ISIS’, which manages the terror outfit’s activities in Karnataka. He had been living under the name of Premraj Hutagi in Mysuru in a rented home for over a month, and had gone to Mangaluru on Saturday. When this house was raised post Saturday’s blast, material used for making that bomb were found, said the police. They suspect Shariq was taking the bomb for an experimental blast when it went off in the auto-rickshaw.

The IED used in the Mangaluru auto-rickshaw blast is similar in structure to devices used by a little-known group called the ‘Base Movement’ — comprising cadre from radical Muslim groups like the proscribed Al Ummah in Tamil Nadu. The Movement is suspected to have carried out a series of blasts in court complexes in Karnataka, Kerala, Tamil Nadu and Andhra Pradesh in 2016. No deaths occurred in any of these blasts.

Five members of the Base Movement were arrested from Tamil Nadu at the end of 2016 in a joint operation by the NIA and the police from Andhra Pradesh and other states.