Explained: The rise and fall of the UPA

🔴 Mamata Banerjee has said there is no UPA, signalling that an anti-BJP grouping need not have the Congress as its automatic leader. A look at how the UPA began and disintegrated, and the new assertion by regional parties. Then PM Manmohan Singh and his Cabinet for UPA-II on May 22, 2009. Mamata Banerjee, who joined UPA that year, was made Railways Minister. (Express Archive)

On a visit to Mumbai on Wednesday, Trinamool Congress chief and West Bengal Chief Minister Mamata Banerjee made two politically significant statements. She said it would be easy to defeat the BJP, should all regional parties come together. And after a meeting with NCP chief Sharad Pawar, she said: “What is UPA? There is no UPA.”

Coming from Banerjee, herself once part of the UPA (United Progressive Alliance), the stress on “regional parties” is a signal to these parties that the Congress is not in a position to challenge the BJP, and that an alternative collective of regional forces is better placed to do so. Banerjee was perhaps suggesting that it was time for a new grouping, one in which the Congress cannot be the automatic leader.

The UPA, formed in 2004 in response to political exigencies, faced many challenges —abandonment by principal partner the Left in 2008, arm-twisting by some allies, desertion of many constituents between 2004 and 2014, and the ultimate decimation in 2014 after an unexpected second chance in 2009.

The birth of UPA

It came into existence after the Atal Bihari Vajpayee-led NDA’s defeat in the 2004 Lok Sabha elections. With 145 seats, the Congress was only seven seats ahead of the BJP. Keeping the BJP out became the imperative for the secular opposition, and the Congress naturally became the core, being the single largest party.

The four Left parties — CPM, CPI, RSP and Forward Bloc — provided support from outside, on the basis of a Common Minimum Programme (CMP), which was signed on May 17, 2004 and became the guiding light for policies and programmes.

While the Congress had not invited the Samajwadi Party and the RLD for the meeting, Surjeet brought both Ajit Singh and Amar Singh with him.

The first party to leave the UPA was TRS in 2006. KCR, then Labour Minister, and his party colleague A Narendra quit the government over the TRS’s demand for Telangana state.

Vaiko’s MDMK left the coalition and withdrew its support to the government in 2007, accusing it of failing to implement most of the schemes in the CMP.

The biggest setback came in 2008 when the four Left parties withdrew their support over the government’s insistence on going ahead with the India-US nuclear deal. Differences over the deal had come to the fore in 2005 in the wake of PM Singh’s visit to the US, during which New Delhi and Washington decided to renew civil nuclear cooperation. Over the next three years, the government and the Left engaged in protracted negotiations, until the Left’s withdrawal.

The government was pushed into a minority, but survived the no-confidence motion as Mulayam Singh Yadav’s Samajwadi Party came to its rescue — the same SP that had felt humiliated when it had not been invited to be part of the UPA in 2004.

Electoral realignments in their respective states led to the exit of the PDP and the PMK in 2009. The PMK left the UPA and allied with the AIADMK in Tamil Nadu against the DMK-Congress, while the PDP quit as the Congress chosse to ally with the National Conference to form the government in Jammu and Kashmir.

Also Read |Will not be a rubber stamp of any party: TMC on not signing joint statement of Opposition parties

The UPA returned to power in 2009 with the Congress surprisingly bagging as many as 206 seats. Although in a much more comfortable position than five years earlier, the Congress still needed allies. And in came the Trinamool Congress and National Conference. Banerjee was given the Railways portfolio.

But compared to UPA-I, the list of allies had reduced. Only five parties were sworn in with the Congress – the Trinamool Congress, NCP, DMK, National Conference, and the Indian Union Muslim League.

The UPA did not have the support of the Left this time. Also missing were Paswan and Lalu The two had ignored the Congress while forming an alliance for polls in Bihar, and the Congress did not invite Lalu’s RJD to be part of the government. The RJD, however, extended support to the government, and so did the SP and the BSP. Lalu eventually withdrew support in 2010, protesting against the adoption of the Women’s Reservation Bill in Rajya Sabha.

Many parties including the AIMIM, VCK, Sikkim Democratic Front and Bodoland People’s Front, however, were part of the UPA with no ministerial berths.

Banerjee, meanwhile, dictated terms to UPA-II. For instance, in 2012, she asked her party colleague Dinesh Trivedi to resign as Railway Minister after he hiked passenger fares, and nominated party MP Mukul Roy as his successor. The Congress leadership had no option but to comply. 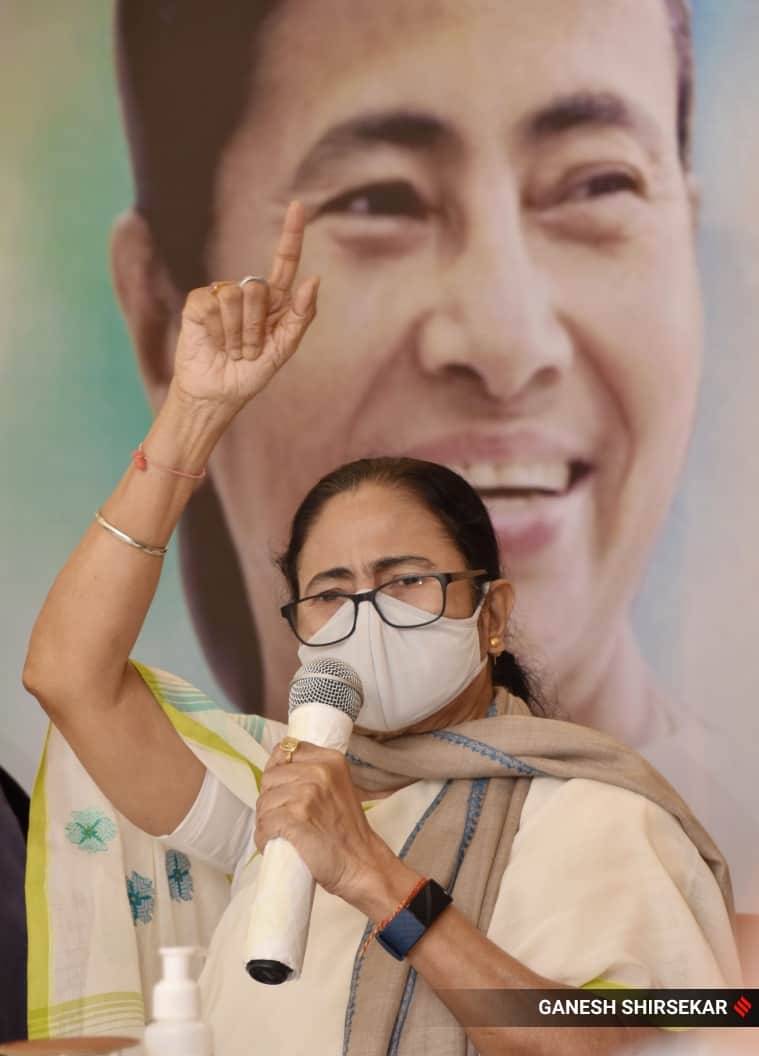 The same year, the Trinamool Congress as well as the DMK quit the UPA. In March 2012, the DMK, the second biggest constituent, pulled its five ministers out in protest against the government for not taking up its concerns in the proposed UN resolution against Sri Lanka on alleged human rights violations of Tamils. And in September, the Trinamool Congress pulled out its six ministers in protest against its decision to go ahead with implementation of FDI in multi-brand retail.

Jharkhand’s JVM-P, with two MPs, withdrew its support on the same issue. The AIMIM too quit the UPA that year.

The Congress was decimated in the 2014 Lok Sabha elections, with its lowest-ever tally of 44. Although the grouping was still referred to as the UPA, there was, technically speaking, no UPA after 2014. Congress leaders, in fact, say that these days, they generally use the term “like-minded parties” for opposition parties.

Banerjee is, therefore, in a way right in saying that there is no UPA. Its leaders have not met in a long time. The Congress’s relations with most of them are strained now, except with the DMK, the NCP and the JMM.

The Congress has continued to suffer setbacks, capped by another decimation in 2019. Over the last seven years, several senior leaders have left the party, which has hobbled from one defeat to another in states. Internal dissent at both national and state levels, and the inability to address the leadership question, has added to the drift. Many in the Opposition believe that the Congress, with its house not in order, cannot provide the leadership required.

For the Congress and the remnants of the UPA, the newest challenge is the Trinamool Congress’s aggressive expansion drive, Banerjee’s growing stature, and her efforts to reach out to the Congress’s allies.

By asserting there is no UPA, Banerjee was perhaps suggesting it was time for a new grouping, one in which the Congress cannot be an automatic leader. And in this, Pawar and Banerjee seem to be on the same page.

Sources in the NCP have long been saying that Pawar is getting impatient with the Congress for not providing the leadership required for the opposition camp. Some NCP leaders say Pawar is of the view that regional parties can give a tough fight to BJP, and that the Congress can decide whether it wants to be part of it.

There had been speculation that Pawar could initiate the realignment of regional forces. And indeed, after his meeting with Banerjee, Pawar said the opposition parties have to provide a strong alternative. Asked if Congress would be a part of this strong alternative, he said: “All those opposed to the BJP are welcome to join us. There is no question of excluding anyone.”

Spotify Wrapped 2021 is now out with a personal touch: Here are the new features