‘No evidence’ to ‘no discharge’: The NIA’s U-turn in Malegaon case

NIA, which probed the serial bombings that killed at least 37 people on September 8, 2006, had disagreed with the conclusions of the investigations carried out by the Maharashtra ATS and the CBI before it. 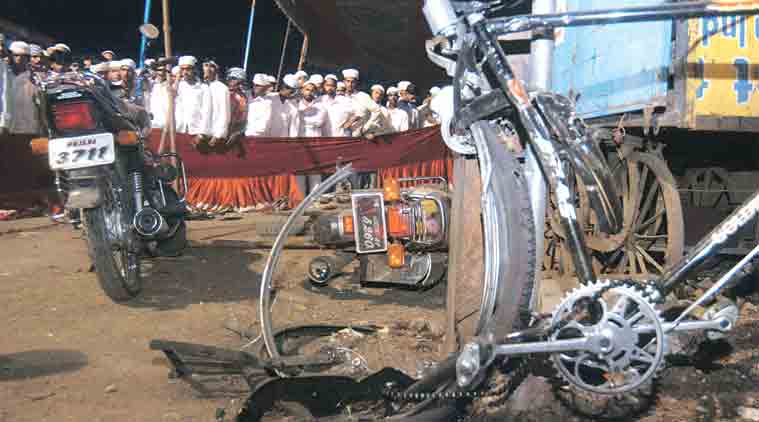 NIA said a group of Hindu radicals had carried out the attacks that killed 37. (Archive Photo)

Last week, the National Investigation Agency (NIA) told a sessions court that the discharge of nine Muslim men arrested for the 2006 Malegaon bombings “cannot be allowed”, thus changing its earlier position in the case.

NIA, which probed the serial bombings that killed at least 37 people on September 8, 2006, had disagreed with the conclusions of the investigations carried out by the Maharashtra ATS and the CBI before it. The NIA took over the investigation from the CBI in 2011.

Five of the nine accused were present in court when counsel for NIA Prakash Shetty made his submissions on April 12. One accused was exempted from appearance, another is dead; and two are in jail after being convicted in the July 2006 Mumbai train bombings case.

On August 29, 2013, eight of the nine accused filed a discharge application before the court. This is what the NIA said in its seven-page reply, filed on April 8, 2014 — its first official statement on the matter:

“It is submitted that the evidence collected by NIA in further investigation is not in consonance with the evidence collected earlier by ATS and CBI. No evidence was found in support of the conclusion drawn in final report filed by ATS and supplementary final report submitted by the CBI recommending prosecution of the nine accused,” the reply said. The agency urged the court to pass appropriate orders in view of this submission.

The NIA compared its investigation with that of the ATS, and raised questions about the involvement of the nine men who were first arrested by the state agency. It said that after taking over the case, it had inspected the crime scene to reconstruct the sequence of events.

It also said that the same witness was shown as being present at two different places at the same time — both for the seizure by police of a unexploded bomb at the Mohammadiya Masjid shopping complex, and of the clothes of a deceased person.

Referring to another witness who claimed to have witnessed the preparation of the bombs, the NIA reply stated that although the ATS had recorded his statement under Section 164 CrPC before a magistrate, the CBI, which too had probed the case, had been unable to trace him. However, when the NIA traced him, the witness retracted his statement, stating it had been recorded under duress.

The NIA said that one of the alleged bomb planters, Mohammed Ansari, had told the agency that on the day of the blast, he was in Fulsawangi in Yavatmal, 400 km away. “Twelve persons from Fulsawangi were examined who supported his version,” the reply said.

The accused Shabbir Batterywala, who died in an accident last year, was found to be in judicial custody in Mumbai on the day of the blast.

The NIA said that its investigation had revealed that Manohar Nawaria, Rajendra Chaudhary, Dhan Singh, Shiv Singh, Sunil Joshi (now dead), Ramchandra Kalsangra, Ramesh Mahalkar, Sandeep Dange and a few others had “entered into the criminal conspiracy, hatched by them between January 2006 to September 2006 to commit terrorist act at various places in India, most specifically at Malegaon, Maharashtra”.

In 2010, Swami Aseemanand, a leader of an RSS affiliate organisation, confessed before a magistrate in New Delhi that the RSS and smaller Hindutva organisations were responsible for the 2006 terror attack in Malegaon, and the Samjhauta Express, Mecca Masjid and Ajmer dargah bombings of 2007. The confession — which Aseemanand subsequently claimed had been made under duress — came four years after the nine Muslim men had been arrested for the Malegaon attacks. In November 2011, they were granted bail.

Aseemanand’s confession, recorded in Hindi over 42 pages, said RSS national executive member Indresh Kumar had participated in the planning and execution of the Malegaon and Mecca Masjid attacks. Aseemanand confessed that he suggested that Malegon be targeted as 80% of its population was Muslim, but claimed the attacks were masterminded by Joshi.

Aseemanand gave details of his alleged meetings with Kumar at an ashram he ran in Dangs in Gujarat. Kumar, Aseemanand claimed, had handpicked members from lower ranks of the RSS to carry out the attacks. He claimed that his own role was confined to motivating the attackers.

Congress out to expose hub of corruption in Gujarat, says Shankersinh Vaghela