Explained: In Kerala, why Covid-19 deaths remain high despite fall in caseload

Kerala Covid-19: An analysis of the death statistics showed that 74 per cent of those who succumbed to the virus were above the age of 60. Twenty-one per cent of the deaths were of people between the ages of 41 and 59. 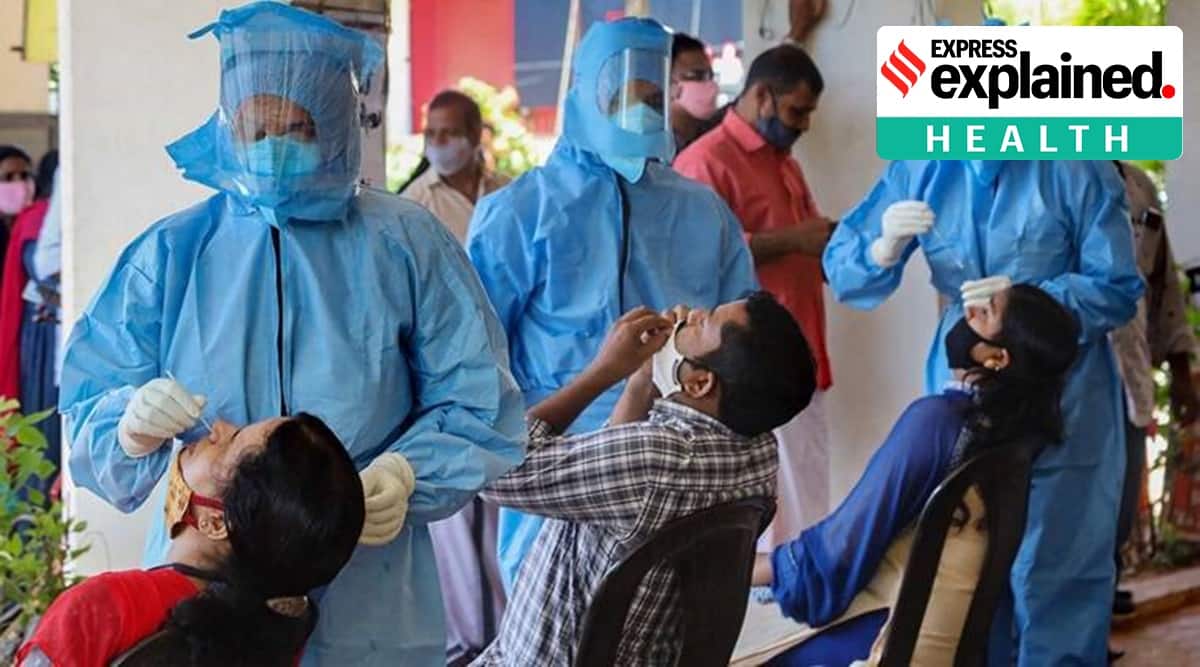 After a spurt following the festival of Onam in August, Covid-19 cases in Kerala are on a downward trend, with the active caseload diminishing by nearly 90,000 cases in the last three weeks. The R-value, which determines the pace of disease transmission in a community, has also fallen below 1 in Kerala after seven months. However, there has not been a proportionate reduction in Covid-19 deaths in the state. Daily deaths continue to hover between 100 and 200. A total of 3,109 deaths have been recorded since September 1 with the cumulative fatality figure touching 23,897.

In a medical bulletin on Tuesday, the health department claimed that in the Sept 12-18 period, when the average active cases was 1.96 lakh, only 2% of them needed access to oxygen beds and 1% for ICU beds. It said that with the reduction of active cases in the period, there has been a corresponding decrease in demand for ICU, ventilator and oxygen beds by 6%, 4% and 7% respectively. However, the number of deaths in each week of September continues to plateau: 1,032 in the week ending Sept 7; 959 in Sept 8-14 period; and 1,118 in Sept 15-21 period.

Covid-19 in Kerala: Why high deaths despite fall in caseload

One of the reasons why deaths haven’t slowed as expected in the last three weeks could be due to a time-gap in the pandemic, said Dr Arun NM, an internal medicine expert who has been following the pandemic in Kerala very closely. “There’s usually a two-week gap between reduction in cases and deaths,” he said.

Another factor could be a significant number of sick people with comorbidities who may not have taken even a single dose of the Covid-19 vaccine due to hesitancy. “Lots of such cases are being admitted to hospitals. There’s no shortage of oxygen, but there are still patients being treated in the ICU and on a ventilator,” he said.

In addition, Dr Arun claimed that there has been “undercounting” of Covid-19 deaths in the state, especially in the months of May and June at the height of the second wave. In May, the government reported 3,507 deaths, but the actual numbers may be close to 10,000 in that month, claimed Dr Arun. If the numbers were reported correctly, he argued, there wouldn’t be a plateau as is being seen currently.

“For example, in Pathanamthitta district, the collector used to put out details of daily deaths like age, location etc. When we checked, at least 50% of the actual deaths in May were not counted (by govt officials). That’s under-counting. But after June 15, this (undercounting) may have reduced to 15-20%. As per my estimate, Kerala’s actual deaths would have touched 45,000 by now,” he said.

Dr P Gopikumar, an ENT surgeon based in Thrissur and state secretary of the Indian Medical Association (IMA), said a factor contributing to Covid-19 deaths could be the deterioration of condition of elderly people and those with comorbidities while undergoing isolation at home.

“Lots of people are undergoing isolation at home after testing positive. Among them, the most elderly people may not have symptoms at first, but there could be a quick turnaround in their condition. If they have underlying conditions, it could be fatal. In our state, there are good mechanisms to ferry people to hospitals, but sometimes, delays may occur,” he said.

To better understand the trajectory of such deaths, he said a medical audit is necessary. He added that since active cases are on a swift decline for the past two weeks, a similar fall in death rate can be witnessed by the next week.

That Kerala has inoculated 90% of its population above the age of 18 with at least one dose of the vaccine will further arrest the spread of the virus. Since it takes at least two weeks for the natural immunity to develop and antibodies to build, the effects of the vaccine in 90% of the population could be seen by mid-October, underlined Dr Gopikumar.

Xiaomi to launch new ‘Civi’ smartphones on September 27: What we know so far