Explained: How spike in fuel prices led to crisis in Kazakhstan

A state of emergency has been declared in Kazakhstan and the government has officially stepped down following violent protests against a sharp and sudden increase in fuel prices. A look at how the crisis has unfolded. 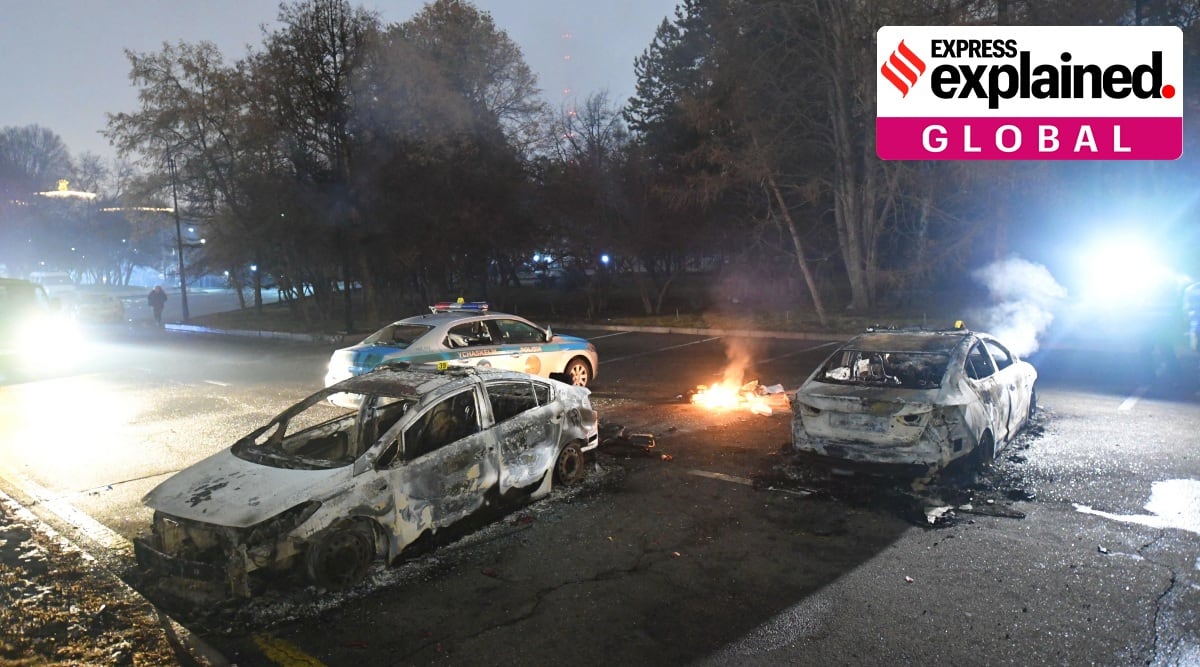 A sharp and sudden spike in fuel prices triggered a national crisis in Kazakhstan, with the government officially stepping down on Tuesday, following days of violent protests across the country.

Kazakh security forces on Thursday said that dozens of protestors and at least eight law enforcement officials were killed during an operation to restore order in the main city, Almaty, BBC reported. Russia has sent in troops to assist security personnel in their efforts to restore order in the country. Kazakh President Kassym-Jomart Tokayev requested the support of the Moscow-led Collective Security Treaty Organization (CSTO), a military alliance, comprising Russia, Armenia, Belarus, Kazakhstan, Kyrgyzstan and Tajikistan.

On Tuesday, Tokayev declared a two-week state of emergency in Almaty as well as the western Mangistau province, where thousands of protesters have been seen storming government buildings and clashing with the police officials. Internet services were promptly shut off and messaging apps were banned.

Just hours later, Tokayev accepted the resignation of the government in a bid to quell the violent protests and ordered the acting cabinet to reinstate price controls on Liquified Petroleum Gas (LPG). But the President’s bold move didn’t quite have the desired effect as ordinary Kazakhs continued to force their way into the offices of top government officials and capture police vehicles on Wednesday.

Notably, Tokayev was among the leaders of five Central Asian nations, who were invited to attend India’s Republic Day celebrations later this month.

So, why are Kazakhs protesting?

Angry Kazakhs first took to the streets on Sunday after fuel prices doubled in the oil-rich Central Asian nation when the government lifted price caps for LPG, commonly used in vehicles. The protests began in the oil city of Zhanaozen, where at least 16 oil workers protesting against poor working conditions were killed by the police in 2011.

Demonstrations broke out and quickly turned violent in cities and towns across the country, in what is being called the biggest wave of protests in Kazakhstan’s history. Protesters demanded the resignation of the government and lowering of LPG prices.

They have argued that the jump in prices would cause a steep increase in food prices and deepen the income inequality that has plagued the nation for decades. Just last year, inflation in the country was closing in on 9 percent year-on-year, the highest it has been in over five years, Reuters reported.

More than 200 people have been detained in the protests so far.

But cheaper fuel is only the tip of the iceberg. There has been a growing discontent among ordinary Kazakhs, both over rising income inequality, which has only worsened due to the coronavirus pandemic, and the lack of democracy.

While the country has been able to attract millions of dollars worth of foreign investments by appearing politically stable, its authoritarian government has been widely criticised over the years for violating fundamental freedoms. For instance, during the presidential elections of 2019, there were widespread reports of irregularities.

A damaged room inside the mayor’s office building after it was stormed by demonstrators in Almaty, Kazakhstan January 5, 2022. (Reuters Photo)

The election took place after the country’s long-time Soviet-era leader Nursultan Nazarbayev stepped down from his post. He was replaced by Tokayev, who is widely regarded as his hand-picked successor. Nazarbayev and his family, however, continued to enjoy a fair bit of power in the country.

Several protests broke out calling for a boycott of the elections — one of the first instances where citizens were openly criticising the government in a country where dissent is rarely tolerated.

Even today, most of the anger is directed towards Nazarbayev, who is widely still considered the country’s ultimate ruler. Given the growing anti-Nazarbayev sentiment, it is unsurprising that chants of ‘Old man, go away’ have been echoing across the country this week.

How did the government respond to the protests?

In a televised address, he announced that he will be replacing Nazarbayev as the leader of the country’s Security Council. He also dismissed the former president’s nephew, Samat Abish, from the position of first deputy head of the country’s national security service.

Late on Tuesday, he assured Kazakhs that authorities would soon being down LPG prices to “ensure stability in the country”. According to The Guardian, he said that the interim government would introduce a price cap of 50 tenge (about 8p) a litre on LPG, roughly half the current market price, in Mangistau province. He also urged the action cabinet ministers to extend price controls to gasoline, diesel and other “socially important” consumer goods. He condemned the protests, but said that the situation was steadily improving in cities and towns after he declared the emergency.

The recent crisis has caused considerable concern in neighbouring Russia and China, both of which are key strategic partners of Kazakhstan.