Explained: Islamic State chapter in Afghanistan, and the turf war with Taliban

ISKP, the group blamed by the US for Thursday’s bombings at Kabul airport, is the Afghan chapter of the Islamic State. What kind of attacks has it been involved in earlier, and what is its rivalry with Taliban? 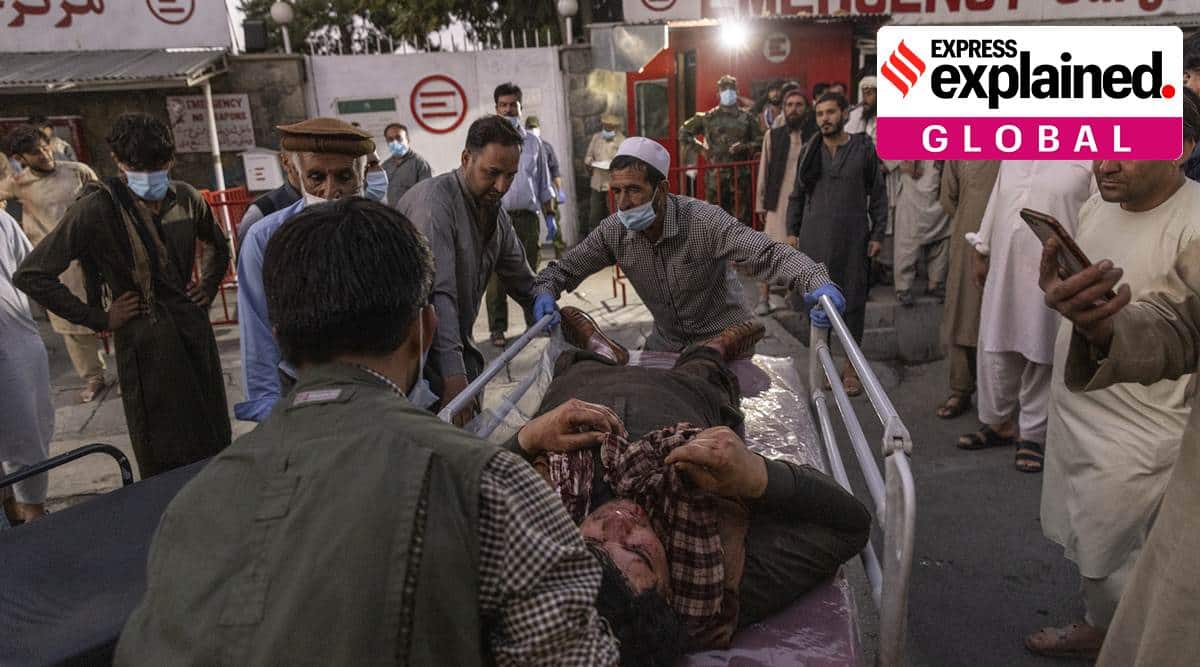 A person wounded in one of the blasts outside the Kabul international airport is carried on a stretcher on Thursday. (The New York Times)

In an editorial in its weekly paper al Nabha last Friday, the Islamic State, in its first comments on the victory of the Taliban, dismissed it as a “Mullah Bradley” project, in other words, a United States proxy. The editorial criticised the “new Taliban” for wearing a “guise of Islam” to undermine the IS in the Af-Pak region, and questioned if it would implement Sharia in Afghanistan. The editorial also said it was preparing for a new phase of jihad.

Also in Explained |Layout of Kabul airport, and where the blasts occurred

Whether or not that was a reference to Afghanistan, with the double blast attack at Kabul airport on Thursday evening that killed over 60 and injured many more, the IS-Khorasan Province (ISKP), the Afghan chapter of the group, blamed by the US and other intelligence forces for the bombing, has announced that it is present in the “new Afghanistan” and intends to continue a deadly war with the Taliban.

In the last few weeks, as the Taliban intensified their military operations to take over Afghanistan and US troops left, the ISKP had kept a low profile. The last attack claimed by it was on June 8 in Baglan, where gunmen killed 10 people who worked for the British charity called Halo, involved in mine clearing operations. Most of the victims belonged to the Hazara community, who are Shia. Earlier, ISKP claimed the bombing of a Kabul school, once again targeting the Hazara community. Most of the 100 killed were children. These attacks were in keeping with a trend that became conspicuous as it lost territory to Afghan forces, and was weakened further by the Taliban. Through 2018 and 2019, the ISKP was engaged in fierce battles to retain its strongholds, especially in the regions of Kunar and Naganhar. In 2019 and 2020, massive attacks attributed to or claimed by IS, shook Afghan cities. In April 2020, there was a deadly attack on a gurdwara in Kabul, followed by a suicide bombing in the maternity ward of a Kabul hospital. There were other attacks in Kabul – at the University, a clinic of the Medecins Sans Frontiers, the Jalalabad prison, a funeral procession of a police officer in Nangarhar.

While 2020 was the year of ISKP spectacular urban suicide bombings and gun attacks, according to a study by Saurav Sarkar of the Washington think tank Stimson Centre, the 11 attacks in 2020 were a sheer drop from 343 attacks that were attributed to it in 2019, reflecting a steep decline in its manpower, resources and organising capacities.

The ISKP came into existence in 2014 in Pakistan during a period when the Pakistan Army, under General Raheel Sharif, carried out operations in the Waziristan area against the Tehreek e Taleban. A group of disgruntled Taliban fighters broke away from the TTP in 2014, rebelling against the leadership of Mullah Fazlullah, or Mullah Radio.

The rebels led by Omar Khalid Khorasani accused TTP of selling out to the “killers of the mujahideen” by entering into talks with the Pakistan Army earlier that year. They professed allegiance to the IS. Several attacks in Pakistan were claimed or attributed to this group, which called itself Jamat ul Ahrar. They joined forces with other groups such as Lashkar-e-Jhangvi al-Alami, Lashkar-e-Islam, and foreign ones such as the Islamic Movement of Uzbekistan (IMU), the Uighurs, and rebels from the Afghan Taliban.

Sometime in 2018, embattled and bereaved of several of its commanders and cadres, the ISKP split after a Pakistani Pashtun, Sheikh Aslam Farooqi, who had once been with the Lashkar-e-Toiba, and fought alongside Baghdadi cadres in Syria, took over the leadership. For a group that was fighting the Taliban and Pakistan, his loyalties came under suspicion, with foreign cadres convinced he was being directed by the Pakistani security forces. The ISKP had by then stopped attacks on Pakistani soil. The Central Asian fighters broke away and their faction appointed its own leader, according to a recent article in the Quint by Anand Arni, a former Indian intelligence official. Indian intelligence agencies believe ISKP has several LeT fighters among its cadres.

Farooqui was arrested by the National Directorate of Security after the Kabul gurdwara bombing, and along with a Kashmiri militant Aijaz Ahangar. Indian intelligence officials and the deposed Afghan government alleged that the ISKP was a creation of Pakistan, to give deniability for attacks that would otherwise be attributed to the Taliban or Haqqani network. Arni has written that the sophistication of the urban attacks belied ISKP’s capabilities, as they were not a group that was familiar with Kabul. Pakistan in turn has alleged that the ISKP is an Afghan-Indian creation.

According to reports, at its peak the ISKP managed to attract over a 100 people from Kerala. The lone gunman who carried out the Kabul gurdwara attack that killed 25 people was a Keralite, according to Indian intelligence agencies.