K P OLI: A man of ‘eastern values’, one who speaks his mind 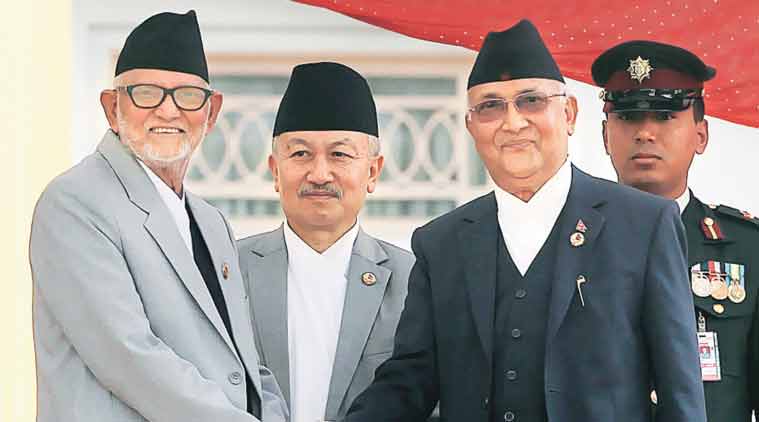 Flying to Kathmandu from eastern Nepal’s Jhapa district on Sunday, 89-year-old Mohan Prasad Oli felt confident that his son K P Oli would become Prime Minister. It was because astrologers had predicted it — the senior Oli was less aware of the politics that had brought his son close to the chair of Nepal’s chief executive. He remained glued to the television through the day, taking a break only after K P Oli defeated incumbent Sushil Koirala in the race and was declared the Prime Minister elect.

On Monday, Oli, 64, became the sixth democratically elected communist Prime Minister of Nepal in 22 years. He is the only one among them who says that “eastern values and philosophy are deeply rooted in my beliefs”. As he proceeded towards Parliament, the new Prime Minister wore a round red tilak on his forehead, symbolising “God’s blessings or a good omen”.

A Naxalite activist of the early 70s who became a moderate communist from the late 80s onwards, Oli was one of the strongest critics of the Maoists when they, under the leadership of Pushpa Kamal Dahal, took up arms against the state with the avowed objective of establishing a Republic in Nepal. Even after the Maoists joined the peace process and became part of the political mainstream, Oli and Dahal had differences over policies and the pace of change. Last year, Dahal said publicly that Oli “needs to be sent to Ranchi for treatment”. Either by a turn of fate or by the compulsion of politics, however, the two comrades found themselves together on Sunday, with Dahal as the proposer for Oli’s candidature.

A school dropout and yet widely read in politics, philosophy, and Nepali and English literature, Oli is said to have committed to memory the entire English dictionary during the 14 years he spent in jail from April 1972. He is more forceful an orator than any other politician in Nepal today, using adage and rustic wisdom, and an acerbic tongue, to great effect. And while his provocative comments have caused him problems at times, the Prime Minister’s biggest strength remains his courage, and a habit of speaking his mind against the tide.

Oli was the first Nepali leader to react to India’s “prescription” on the demarcation of provinces. “A country can be small, but not its sovereignty,” he said. Time and again, he has told India’s ambassador not to “interfere” in Nepal’s internal affairs.

Some months ago, a few Madhes-centric leaders branded Oli anti-Madhes. To their insistence that plain areas in his constituency be included in the Terai province, Oli replied, “My courtyard too is plain, will you claim it? Don’t you see that UP and Bihar are plain too?” For months, the Madhesis demanded an apology, but he didn’t budge. Oddly though, Bijay Gachedar and his Forum Loktantrik, part of the Madhes movement, have backed Oli, and Gachedar has joined the cabinet as one of two Deputy Prime Ministers.

During the 2006 democracy movement, and after the Maoists raised the slogan for a Republic, Oli was scornful: “You will never get to the US by riding a buffalo cart.” And yet, he is now the first Prime Minister to assume office after the constitution endorsing the Republic has come into operation. That he has included the leader of the pro-monarchy Rashtriya Prajatantra Party, Kamal Thapa, in his ministry as the second Deputy Prime Minister may leave him open to attack from political rivals.

Oli was born in a poor family and lost his mother when he was very young. His father married again and moved to Jhapa — across Naxalbari — from Terathum. At 22, inspired by the Naxalite movement in West Bengal, he and some others allegedly killed “seven local class enemies”. He was arrested in 1972, and convicted of sedition. He was released in 1986 on completion of his prison term. Four years later, Nepal adopted multi-party democracy, and Oli became a trusted lieutenant of the legendary Madan Bhandari, who died in a mysterious road accident in 1992.

Oli won three parliamentary elections from Jhapa, became a Minister in 1993, and Deputy Prime Minister in 2000. Two and a half years ago, he became chairman of the CPN-UML. He enjoys the reputation of being a good listener and administrator. The political tasks of maintaining a balance between coalition partners with conflicting ideologies, seeking India’s cooperation, and pressing ahead with effective post-earthquake recovery will put the Prime Minister through a rigorous test.