Explained: What to watch out for at the renovated Jallianwala Bagh memorial

Jallianwala Bagh memorial: What's in the revamped monument complex, what has changed from the original, and what has been added? 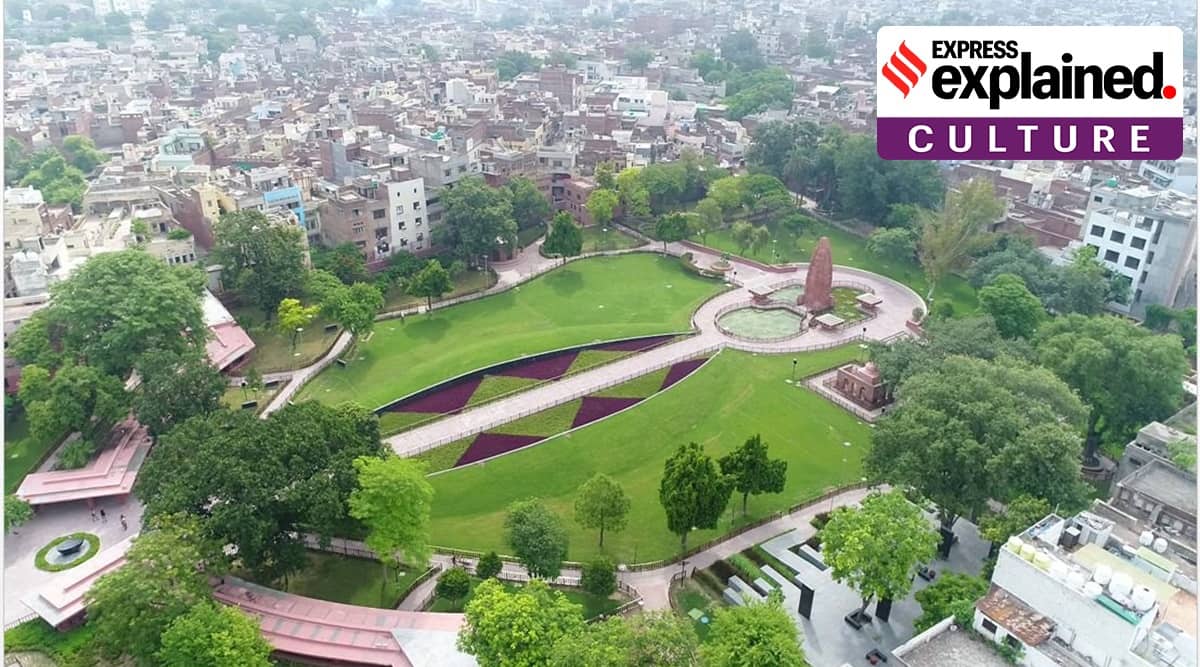 The monument was first opened by then President Dr Rajendra Prasad on April 13, 1961, as a grateful nation’s tribute to the victims of the massacre on April 13, 1919, when a large crowd had gathered at the Bagh to protest the arrest of nationalist leaders Saifuddin Kitchlu and Satya Pal.

Also in Explained |Why Jallianwala Bagh memorial revamp is being criticised

In response to the massive gathering, the British officer Col. Reginald Edward Harry Dyer ordered his troops to fire into the crowd, killing several hundred people.

What’s in the revamped monument complex, what has changed from the original, and what has been added? The monument was first opened by then President Dr Rajendra Prasad on April 13, 1961. (Twitter/@BJP4India)

Modi, who also the chairperson of the Jallianwala Bagh Memorial Trust, dedicated the memorial to the public in the presence of other trust members including Union Culture Minister G Kishan Reddy, Punjab Chief Minister Captain Amarinder Singh, Governor V P Singh Badnore, and several parliamentarians from the region.

Join me as we inaugurate the renovated complex of Jallianwala Bagh Smarak today at 6:25 PM. I also invite you to watch the sound and light show. It would display the horrific massacre of April 1919 and instil a spirit of gratitude and reverence towards the martyrs. pic.twitter.com/p2BDHUbXAJ

The hour-long virtual programme started with a gurbani recital. A two-minute silence was observed to pay a tribute to the martyrs of Jallianwala Bagh. Members of the families of those who fell to British bullets were present to take part in the ceremony.

In 2019, approximately Rs 20 crore was earmarked by the Centre for the commemoration of 100 years of the Jallianwala Bagh massacre.

Restoration and conservation work, and the building of facilities such as toilets, ticketing counters, and drinking water, have been undertaken by the Ministry of Culture. The memorial has been shut for the public since February 2019 for the makeover, implemented by the government-owned NBCC Ltd.

The memorial has been shut for the public since February 2019 for the makeover. (Twitter/@BJP4India)

The entry and exit points to the Bagh have been repositioned, and a lotus pond has been built around the main memorial. The famous ‘Shahidi Khu’ or Martyrs Well, into which people jumped to escape the hail of bullets, is now enclosed in a glass shield — a controversial decision that has been criticised since it is perceived to restrict the view.

A 28-minute Sound and Light show re-enacted the events of April 13, 1919, to be shown free of cost every evening. A Salvation Ground has been built for visitors to sit in silence to honour the martyrs.

Several new sculptures of martyrs have come up on the high walls of the narrow lane through which visitors enter the complex. These represent ordinary Punjabis from different walks of life, who walked into the park on that fateful day, but never returned.

The narrow alley leading to Jallianwala Bagh has been rebuilt into a gallery with murals. (Express Photo: Rana Simranjit Singh)

Four new galleries have been created through adaptive re-use of underutilised buildings in the complex to showcase the historical value of events that took place in Punjab during that period. The galleries depict the history of Punjab, history of the freedom movement, and the Gadar movement.

It also has a sculpture of Guru Nanak Dev, Sikh warrior Banda Singh Bahadur, and a statue of Maharaja Ranjit Singh.

The politics of nationalism

With just a few months to go for the Punjab elections, the politics of nationalism has taken centrestage. Just last week, the Punjab Chief Minister had inaugurated the Jallianwala Bagh Centenary Memorial Park, a second memorial as “a tribute to the unknown martyrs” of the massacre, saying that the memorial at the original site was built to remember the martyrs who were identified.

The second memorial has been built over 1.5 acres of land at the Amrit Anand Park in Ranjit Avenue, almost 3 km away from the site.

Capt Amarinder Singh, who is also a trustee of the Jallianwala Bagh, will be attending Saturday’s event. An invite has also been sent to leader of the Opposition Congress in Lok Sabha Adhir Ranjan Chowdhury, who too is a trustee. In 2019, the Centre had brought in the Jallianwala Bagh Amendment Bill to remove the Congress president from the list of trustees.