Iran has announced that it has amassed more low-enriched uranium than allowed under a nuclear deal signed with the US and other countries in 2015. A look at what was agreed, and why Iran has violated it 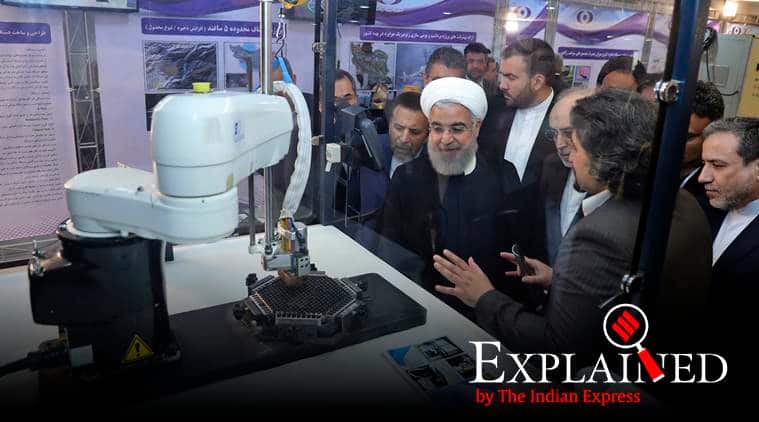 On Monday, Iran told the world that it had accumulated more low-enriched uranium than it was allowed to have under a landmark 2015 nuclear deal it had signed with the United States and five other countries. The deliberate violation of the provisions of that agreement, Iran has said, was in response to the reimposition of economic and other sanctions by the US after it unilaterally pulled out of the deal last year.

Iran’s latest move has put further strains on an already precarious agreement that seeks to prevent it from acquiring nuclear weapons in exchange for the easing of economic sanctions. But Iran has kept the room open for negotiations, saying its move was “reversible”.

What is enriched uranium, and how much has Iran accumulated?

Uranium is the most common fuel used in nuclear reactors, and is required for nuclear electricity generation as well as to make nuclear weapons. On the other hand, naturally occurring uranium, which is predominantly composed of a stabler isotope, uranium-238, is not fissionable, meaning its nucleus cannot be split in a way that can sustain a chain reaction. To be used in nuclear reactors, natural uranium has to be ‘enriched’ with uranium-235 that can sustain fission chain reactions. Naturally occurring uranium has less than 1% of the uranium-235 isotope.

Even a small amount of enrichment, in the range of 3% to 5%, called “low enrichment”, is sufficient to run nuclear power reactors which allow only controlled fission reactions. For making nuclear weapons, however, “highly enriched” uranium — with more than 90% uranium-235 — is needed. More enrichment means more uranium-235 nuclei are available to be split, which in turn means greater heat and energy can be generated.

Under the 2015 nuclear deal, Iran is required to ensure that, for the next 15 years, its stockpile of uranium is not enriched beyond 3.67%. Further, this stockpile of 3.67% enriched uranium itself is not supposed to exceed 300 kg.

It is this 300-kg limit that Iran has now said it has exceeded. However, it has not specified how much more low-enriched uranium it has created. Iran has also said that its next step would be to enrich uranium beyond the 3.67% limit.

Under what circumstances was the deal with Iran signed?

The deal signed in July 2015 was an attempt by the US and other major world powers to ensure that Iran did not acquire nuclear weapons, which it has been suspected of trying to do for several years now. The International Atomic Energy Agency (IAEA), which is a sort of an international regulatory body on nuclear energy, had in 2003 reported the possibility of Iran secretly trying to develop nuclear weapons at one of its nuclear facilities. That had invited economic sanctions from the US and other countries.

After protracted negotiations that lasted over a decade, Iran and the US reached an agreement to restrict Tehran’s nuclear programme to only civilian uses in exchange for lifting of the sanctions. Apart from the US, the other parties to the deal are Russia, the UK, France, China and Germany, together called the P5+1.

The complex agreement specifies a large number of steps that Iran needs to take and requirements that it needs to meet to keep the economically crippling sanctions away. Most of the provisions of this agreement are supposed to run for the next 15 years, but some, like international monitoring of Iran’s uranium mines and mills, or of its nuclear power production facilities, are meant to be in force for the next 25 years.

In return, the US agreed to cease its sanctions against Iran’s oil and banking sector, allowing their re-entry into the international systems. It also allowed the sale of commercial passenger aircraft to Iran, which had been put on hold. The UN and European Union also eased their own sanctions on Iran.

So, why did the US withdraw from the deal and reimpose sanctions?

The agreement was negotiated when the Barack Obama administration was in power in the US. Current President Donald Trump has never shied away from expressing his discomfort with the deal, which he claims, was detrimental to the American interests. The Trump administration has advocated tougher provisions in the agreement, particularly with regard to the expiry dates on restrictions related to uranium enrichment. It does not want these restrictions to have any end-date.

After its offer to renegotiate the deal did not find acceptance from Iran, the US withdrew from the deal last year. It also slapped fresh sanctions on Iran. The five other countries, however, continued to be parties to the deal, thereby weakening the impact of US sanctions. However, these sanctions were still damaging enough for Iran to finally respond after a year.

What happens to the deal now?

Iran’s defiance of the provisions of the agreement is being seen as largely a bargaining ploy in its ongoing confrontation with the US, especially since it has explicitly said that it was open to reversing its decision if the sanctions against it were lifted. It is being seen as an attempt to put pressure on the other parties to convince the US of the need to keep the agreement, however fragile, in place. The Trump administration, however, has maintained a hardened stance towards Iran, and, in the absence of a diplomatic breakthrough, this could result in the unravelling of the deal.