INS Vagir commissioned into the Indian Navy: What are the features of the Kalvari-class submarine?

Vagir is among the six submarines being built by the Mazagon Dock Shipbuilders Limited (MDL), Mumbai, in collaboration with the French M/s Naval Group under Project 75. Here are the details. 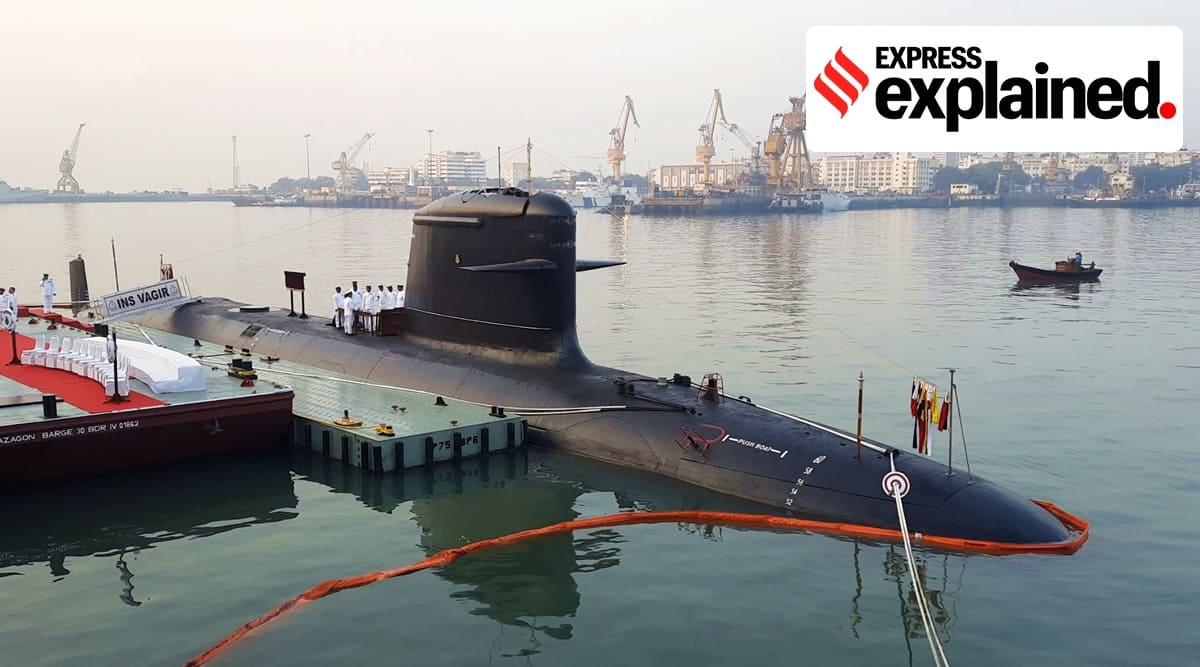 The latest submarine, Vagir, gets its name from the erstwhile Vagir submarine, which served the Navy between 1973 and 2001 and undertook numerous operational missions. (Photo via Twitter.com/DefPROMumbai)
Listen to this article
INS Vagir commissioned into the Indian Navy: What are the features of the Kalvari-class submarine?
x
00:00
1x 1.5x 1.8x

The Indian Navy on Monday commissioned the fifth diesel-electric Kalvari-class submarine Vagir. It is among the six submarines being built by the Mazagon Dock Shipbuilders Limited (MDL), Mumbai, in collaboration with the French M/s Naval Group under Project 75. Four of these submarines have already been commissioned into the Navy and a sixth will be commissioned next year.

“The induction of Vagir is another step towards the Indian Navy consolidating its position as a builder’s Navy, as it also reflects MDL’s capabilities as a premier ship and submarine building yard”, the government said in a press release.

The Indian Express takes a look at the newly commissioned Vagir and what are the capabilities of these Kalvari-class submarines and their strategic importance.

What are the specifications of Vagir?

The latest submarine gets its name from the erstwhile Vagir, a submarine which served the Navy between 1973 and 2001 and undertook numerous operational missions. The construction of the new Vagir began in 2009 and it took its maiden sea sortie in February last year. Also known as Sand Shark, the submarine was delivered to the Indian Navy in December 2022.

According to a government press release, Vagir represents stealth and fearlessness, as it comes with features like an advanced acoustic absorption technique.

Vagir is a Kalvari-class submarine, which includes other vessels, such as the INS Kalvari, INS Khanderi, INS Karanj, INS Vela and INS Vagsheer. Of these, Kalvari and Khanderi were commissioned in 2017 and 2019, and Vela and Karanj were inducted in 2021. Vagir has now been commissioned and Vagsheer was launched in 2022 and is expected to be inducted next year.

In maritime parlance, a class of ships is a group of vessels which have the same make, purpose and displacement. In the Navy and Coast Guard in India, the ships belonging to a particular class are named in a specific manner. Many times the names have the same first letters, prefixes, and similar meanings or the names belong to a particular type of word, for example, names of cities, persons, mythological concepts, animals, rivers, mountains, weapons, etc. The class is generally named after the first vessel in the category. In some cases, a particular class of vessels take their names from an earlier class of vessels which are now decommissioned.

The design of the Kalvari-class of submarines is based on the Scorpene class of submarines designed and developed by French defence major Naval Group formerly DCNS and the Spanish state-owned entity Navantia. This class of submarines have Diesel Electric transmission systems and these are primarily attack submarines or ‘hunter-killer’ types which means they are designed to target and sink adversary naval vessels.

The Kalavari class of submarines have an estimated endurance of approximately 50 days. They also have the capability of operating in a wide range of Naval combat including anti-warship and anti-submarine operations, intelligence gathering and surveillance and naval mine laying. These submarines are around 220 feet long and have a height of 40 feet. It can reach the highest speeds of 11 knots (20 km/h) when surfaced and 20 knots (37 km/h) when submerged

The modern variants of the Scorpene class of submarines have what is called Air Independent Propulsion (AIP) which enables non-nuclear submarines to operate for a long time without access to surface oxygen. It also needs to be noted that the Defence Research and Development Organisation (DRDO) has an ongoing programme to build a fuel cell-based AIP system for Indian Naval Submarines.

The Kalvari class of submarines are capable of launching various types of torpedoes and missiles and are equipped with a range of surveillance and intelligence-gathering mechanisms.

India currently operates one submarine in the nuclear-powered class of Chakra and two other nuclear-powered vessels in Arihant in addition to submarines belonging to three classes of Diesel Electric category — Kalvari, Shishumar and Sindhughosh, some of which are ageing.

The nuclear-powered and diesel-electric submarines have their designated roles in the Carrier Battle Groups, which are formations of ships and submarines with Aircraft Carriers in the lead role. As per the basic principles of submarine deployment and minimum requirement for India to create a strategic deterrence, there is a specific number of submarines of both types that India needs to have in active service.

In the late 1990s, around the time of the Kargil war, a three-decade plan took shape for indigenous construction of submarines which is known to have two separate series of submarine building lines – codenamed Project 75 and Project 75I — in collaboration with foreign entities. The Ministry of Defence is also known to have put in place a roadmap for indigenous design and subsequent construction of submarines which will further add numbers to the Navy’s arsenal.

‘Disgrace’ if Djokovic not allowed to enter US and compete, says Tommy Haas