Republic Day 2023: How India chooses its chief guest, why the invitation is significant

India's Republic Day chief guest is Egypt's President Abdel Fattah El-Sisi. What goes into selecting the chief guest, and why it is an honour? What could go wrong during the visit? Which leaders have been chief guests in the past? Take a look. 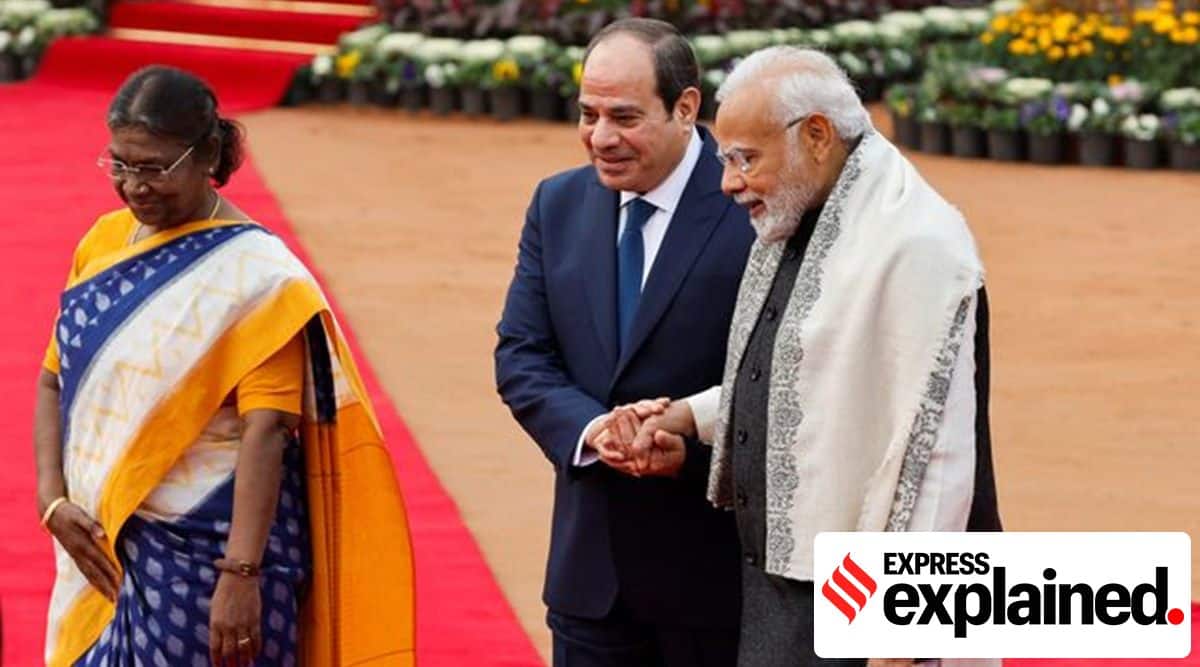 Egypt’s President Abdel Fattah El-Sisi, India’s chief guest for its Republic Day celebrations, was accorded a ceremonial welcome at the Rashtrapati Bhavan on Wednesday after which he held wide-ranging discussions with Prime Minister Narendra Modi. This evening, President Droupadi Murmu will host a State Banquet in his honour.

El-Sisi is in India on a four-day state visit. He will attend the Republic Day celebrations in New Delhi on Thursday. He is the first top Egyptian leader to be invited as India’s Republic Day chief guest.

Also Explained |Egypt’s President El-Sisi in New Delhi for Republic Day: Significance of his visit, and India’s ties with Egypt

Who is Abdel Fattah El-Sisi?

Before becoming the president of Egypt in 2014, El-Sisi was the country’s military chief and defence minister. He succeeded the democratically elected Md Morse after a coup in 2013. Subsequently, El-Sisi won the national election in 2014 on an economic development plank.

So far, his government has received mixed responses as his critics are concerned regarding Egypt’s current economic distress and violent stifling of opposition voices.

Why is being India’s Republic Day chief guest an honour?

Being invited as the chief guest at Republic Day celebrations is the highest honour a country accords in terms of protocol. The chief guest is front and centre in many ceremonial activities which have over time become a part of the fabric of the event and the run-up to it.

They are given the ceremonial guard of honour at Rashtrapati Bhavan followed by a reception hosted by the President of India in the evening. They also lay a wreath at Rajghat, to honour Mahatma Gandhi. There is a banquet in their honour, a lunch hosted by the Prime Minister, and calls by the Vice-President and the External Affairs Minister.

Ambassador Manbir Singh, a former Indian Foreign Service officer who served as Chief of Protocol between 1999 and 2002, said that the visit of the Chief Guest is full of symbolism — “it portrays the Chief Guest as participating in India’s pride and happiness, and reflects the friendship between the two peoples represented by the President of India and the Chief Guest”. This symbolism serves as a powerful tool to forge and renew ties between India and the nation of its invitee, having greater political and diplomatic significance as well.

Advertisement
Republic Day Parade |How are the tableaux selected?

So how is the Republic Day chief guest chosen?

As there is a lot that goes behind the selection of the Chief Guest, the process starts nearly six months in advance of the event.

Ambassador Manbir Singh had earlier told The Indian Express all kinds of considerations are taken into account by the Ministry of External Affairs (MEA) before extending the invitation.

The most central consideration is the nature of the relationship between India and the country concerned. Invitation to be the Chief Guest of the Republic Day parade is the ultimate sign of friendship between India and the country of the invitee. Political, commercial, military and economic interests of India are crucial drivers of the decision, with MEA seeking to use the occasion to strengthen ties with the country of the invitee in all these respects.

Another factor that has historically played a role in the choice of the Chief Guest is the association with the Non-Aligned Movement (NAM) which began in the late 1950s, early 1960s. The NAM was an international political movement of newly decolonised nations to stay out of the squabbles of the Cold War and support each other in their nation-building journeys. The first Chief Guest of the parade in 1950 was President Sukarno of Indonesia, one of the five founding members of the NAM alongside Nasser (Egypt), Nkrumah (Ghana), Tito (Yugoslavia) and Nehru (India).

El-Sisi’s arrival in India as the Republic Day’s Chief Guest invokes the history of the NAM and the close relationship India and Egypt have shared for 75 years.

What happens after the MEA has zeroed in on its options?

After due consideration, the MEA seeks the approval of the Prime Minister and the President on the matter. If the MEA receives clearance to proceed, it then gets to work. Indian ambassadors in the concerned country try to discreetly ascertain the availability of the potential chief guest. This is crucial as it is not uncommon for heads of state to have packed schedules and unavoidable prior commitments. This is also a reason why the MEA does not just choose one option but a list of potential candidates. Discretion is of utmost importance as no formal invitation has yet been made by India.

After a candidate is finalised, more official communication takes place between India and the country of the invitee. Territorial divisions in the MEA work towards meaningful talks and agreements. The Chief of Protocol works on the details of the programme and logistics. A detailed programme for the trip and the Republic Day ceremonies is shared by the Protocol Chief to his counterpart from the visiting nation. This programme has to be followed with military precision.

The planning of the visit involves the Government of India, state governments which the foreign dignitary might visit, and the government of the concerned country.

Can things go wrong during the visit?

Like any other visit by a high foreign dignitary, there are many moving parts involved during the visit of the Republic Day chief guest. Due to this, there is always the possibility of things not going to plan, something that the organisers have to prepare for beforehand. Health issues with the VIP can cause delays. Untimely rain can spoil a lot of things. Organisers prepare and rehearse contingencies for all kinds of situations so that on the big day, things go smoothly.

However, on rare occasions, complications do arise. Writing for The Indian Express, Ambassador Singh recounted an incident where the ADC of the Republic Day chief guest attempted to accompany the chief guest for the inspection of the guard of honour. “But in our practice, only the commander of the Tri-Services Guard accompanies the visitor, and the insistent ADC had to be physically restrained by officials present at the spot.”

The big picture on the chief guest’s visit

Ambassador Singh points out that the chief guest for Republic Day is decided on the basis of other countries’ interest and the guest’s availability — and the natural corollary therefore, is that the visitor should be happy and satisfied with the visit, and that the visit is comfortable.

India is mindful that the media party accompanying the Guest would be reporting in their country on every aspect of the visit. To foster and further grow good relations, it is necessary that the guest’s nation perceives the visit as having been successful, and that their Head of State has been shown all courtesies and given due honour.

In the modern world, visual coverage is of great importance, and the programmes and protocol keep this in view, Ambassador Singh pointed out. He noted that the various chief guests and their Ambassadors in New Delhi have been profuse in their praise for India’s ceremonies and the protocol it accords. India’s hospitality reflects its traditions, culture, and history.

The chief guest of the Republic day is a ceremonial honour presented to the head of state of a country but its significance rises beyond purely the ceremonial. Such a visit can open new possibilities and go a long way in furthering India’s interests in the world.

The list includes an impressive list of world leaders, and reflects both India’s foreign policy priorities and the way the world has perceived it over the decades.