Explained: Why monsoon isn’t over yet

The season officially ended with September, but rainfall has continued in several parts of the country. A look at the trends marking the delayed withdrawal, and other aspects that make this monsoon unusual. 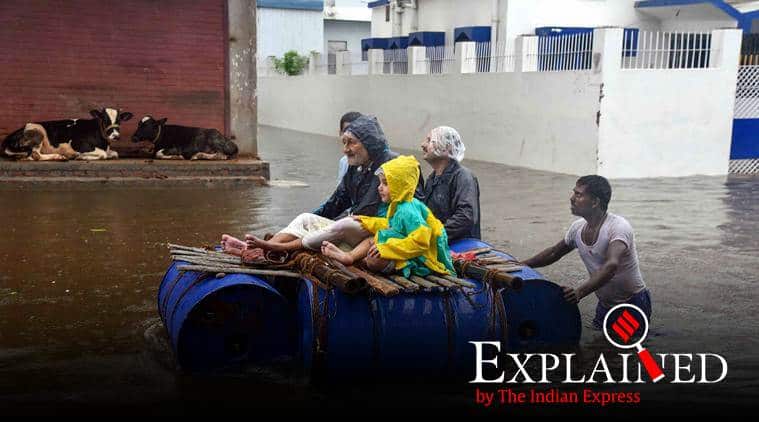 August and September together produced 130 per cent of normal rainfall, and this was the highest since 1983.

One week after the monsoon season officially came to an end, it is still raining in many parts of the country. Patna and Pune, for example, have witnessed uncharacteristic flooding for September with the process of withdrawal of the monsoon having not even begun yet. But that is only one of the reasons why this year’s monsoon has been one of the most unusual in recent decades.

After an extremely dry June, which saw a rain deficiency of 33 per cent, the monsoon brought generous rainfall in July, August and September, each subsequent month exceeding the normal by a higher deviation. In fact, September produced rainfall that was 152 per cent of normal, and this was the second highest rainfall ever recorded in this month. The only higher deviation during September was way back in 1917, when the rainfall was 165 per cent of the then normal for the month.

August and September together produced 130 per cent of normal rainfall, and this was the highest since 1983. And this was the first time since 1931 that the monsoon ended up producing more than 100 per cent rainfall after having a 30 per cent or more deficiency at the end of the first month.

“Just so much has been written about the monsoon and its variabilities, but it seems it still has much more to show us. Just about everything about the monsoon seems to be in chaos – the onset, the withdrawal, the length of the rainy season, active/break periods, north-south and east-west patterns, floods and droughts,” said Raghu Murtugudde, and Earth system scientist at the University of Maryland.

The season was characterised by a number of extreme rainfall events, particularly in the months of August and September, that caused flooding in many parts of the country. Heavy downpours lasting for several days were witnessed in Maharashtra, Karnataka, Kerala, MP, Gujarat, and most recently in Bihar.

There is no standard definition of an extreme rainfall event. The India Meteorological Department (IMD) uses different expressions to classify rainfall according to its intensity. More than 12 cm rainfall within a 24-hour period is classified as very heavy rainfall while rainfall in excess of 25 cm within 24 hours is categorised as extremely heavy.

The number of very heavy rainfall events, which includes instances of extremely heavy rainfall, was more than 2,600 this year, compared to 2,181 last year, and much fewer in the previous years.

“Extreme events are increasing all over the world, not just in India, because of climate change. This is well documented now in scientific literature. Climate change will not manifest as a slow and smooth change in temperature or rainfall but rather in the form of an increase in the number and intensity of extreme events. And these increases are not likely to be smooth and incremental. These would be erratic, and that is what we seem to be witnessing,” said Govindasamy Bala, professor at the Centre for Atmospheric and Oceanic Sciences at Indian Institute of Science in Bengaluru. “But as of now, we cannot say how much of what has happened this year can be attributed to global warming and how much of it is due to inter-seasonal variability. I would guess there is a combination of both,” he said.

The standout feature of this year’s monsoon is the unusually high rainfall in September. The month is normally expected to produce 170.2 mm rain over the country as a whole. This year, it brought 259.3 mm rain.

J Srinivasan, distinguished scientist at the Divecha Centre for Climate Change at IISc in Bengaluru, points out that the last time September produced so much rain, 1917, happened to be a La Niña year. La Niña, the phenomenon in the equatorial Pacific Ocean in which the sea surface temperatures turn unusually cold, is known to strengthen rainfall over the Indian sub-continent during the monsoon months. This year, there is no La Niña. In fact, it started with a weak El Niño, the opposite phenomenon in Pacific Ocean that has a negative impact on Indian monsoon, before the situation turned neutral.

Srinivasan said though there was no La Niña, a similar phenomenon much closer home, called the Indian Ocean Dipole, could have contributed to enhanced rainfall. “There was a cooling of the eastern equatorial Indian Ocean, below Sumatra, and that could have some role to play in the kind of rainfall that we have seen this year,” he said.

The Indian Ocean Dipole is a phenomenon similar to the ENSO condition observed in the Pacific Ocean which creates the El Niño and La Niña events. The sea surface temperatures in the Indian Ocean gets warmer and cooler than normal, and this deviation influences regional atmospheric and weather patterns, notably the Indian monsoon.

Many scientists like to describe the monsoon in terms of the movement of the Intertropical Convergence Zone, or ITCZ, a region near the Equator where the trade winds of the northern and southern hemispheres come together. The intense Sun and the warm waters of the ocean heat up the air in this region, and increase its moisture content. As the air rises, it cools, and releases the accumulated moisture, thus bringing rainfall. During the monsoon season, this ITCZ is located over the Indian subcontinent. By September, as the temperature begins to go down, the ITCZ starts moving southwards of the Indian landmass, towards the equator, and further into the southern hemisphere. This year, this process has not yet started.

For the 18th time in 19 years, the Northeast had rainfall that was less than 100 per cent. In fact, the East and Northeast region, clubbed together as one of the four geographically homogeneous region for purposes of monsoon rainfall, saw a deficiency of 12 per cent.

The IMD says this indicates that the Northeast region is passing through a “below normal epoch”. Apart from exhibiting year-to-year variability, the monsoon is also supposed to have a 30-year variability cycle. During one cycle, it receives below normal rainfall, and in the next it gets above normal. Of course, within this period it exhibits intra-seasonal variations as well. But overall, it tends to follow this pattern.

“The IMD does monitor this 30-year cycle. There is some statistical evidence for that. So, the IMD explanation for what is happening in the Northeast seems logical. I don’t think we have any specific evidence for any climate change impacts for the Northeast region that can explain the rainfall pattern there,” Govindasamy said.

“But every year, we get to know of one aspect or the other of monsoon that differs significantly from our recorded data. The broad scientific understanding is that, because of global warming, we will see more and more extreme rainfall events that will also be more intense, while the instances of moderate or light rainfall events will decrease,” he said.