Explained: What the signing of $500m India-Maldives mega-infra project means

This infrastructure project, the largest-ever by India in the Maldives, involves the construction of a 6.74-km-long bridge and causeway link that will connect the Maldives capital Malé with the neighbouring islands of Villingli, Gulhifalhu and Thilafushi. 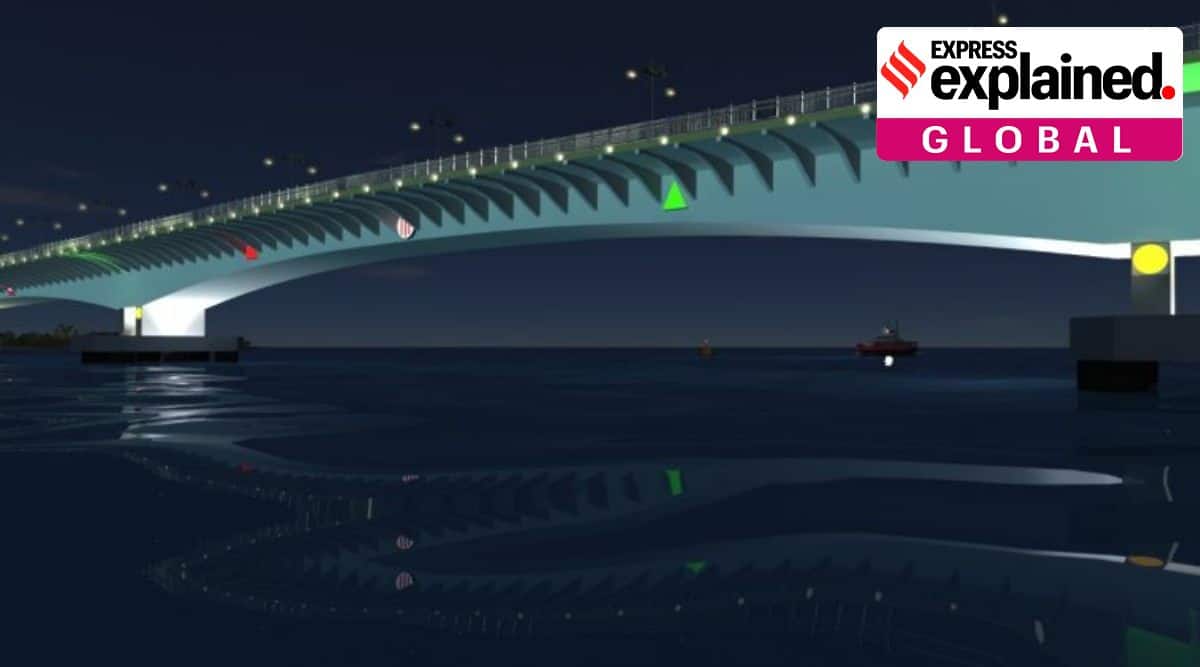 This project is significant because it facilitates inter-island connectivity in the country, said Dr. Gulbin Sultana, a research analyst at the Manohar Parrikar Institute for Defence Studies and Analyses, whose area of research includes the Maldives. (Photo credit: High Commission of India to the Maldives)

A year after India’s External Affairs Minister, Dr. S. Jaishankar, visited the Maldives and during a meeting with his counterpart Maldives Foreign Minister Abdulla Shahid, announced the signing of a $500-million infrastructure project, the Maldives government officially signed an agreement with Mumbai-based company AFCONS, for the construction of the Greater Malé Connectivity Project (GMCP).

This infrastructure project, the largest-ever by India in the Maldives, involves the construction of a 6.74-km-long bridge and causeway link that will connect the Maldives capital Malé with the neighbouring islands of Villingli, Gulhifalhu and Thilafushi. According to India’s High Commission in the country, this project was funded by India in a grant of $100 million, with a line of credit of $400 million.

Contract for Greater Malé Connectivity Project – the largest infra. project in the Maldives – was signed today between AFCONS & Govt of Maldives.

“The Greater Malé Connectivity Project supports the vision of Prime Minister Modi and President Solih for strong bilateral relations. The seeds of the project were planted during the External Affairs Minister’s visit to Malé in September 2019. The GMCP is concrete proof that India is a robust development partner of the Maldives in addition to being the First Responder in times of any emergency in the Maldives,” Sunjay Sudhir, High Commissioner of India to the Maldives, told indianexpress.com in a statement.

What is this project about?

In August last year, The Indian Express had reported that New Delhi had decided to support the implementation of this project following a request from the Maldives government.

This project is significant because it facilitates inter-island connectivity in the country, said Dr. Gulbin Sultana, a research analyst at the Manohar Parrikar Institute for Defence Studies and Analyses, whose area of research includes the Maldives. “Transport is a major challenge for residents who have to take boats or seaplanes to distant islands. Locals take ferries or boats,” Sultana told indianexpress.com. It becomes even more difficult during the monsoons when the seas are rough. This bridge that would connect Malé with the three neighbouring islands would ease the process, Sultana added.

The Chinese-made 1.39 km-long Sinamalé Bridge connects Malé with the islands of Hulhulé and Hulhumalé and this project, four times longer, would link the other three islands.

The project is significant because it facilitates inter-island connectivity in the country, said Dr. Gulbin Sultana. (Photo credit: High Commission of India to the Maldives)

Why it is needed?

Close to 40% of the entire population of the Maldives lives in Malé, that has an area of approximately 8.30 square kilometres, making it one of the most densely populated cities in the world, according to research by the South Asia Center at the University of Pennsylvania.

Delighted that the contract for the Greater Male' Connectivity – Male' to Thilafushi Link Project has been signed between @MoNPHImv & Afcons Infrastructure Ltd. This is a defining moment in the development journey of the #Maldives.

“It is very congested and land is a major issue. There is very little scope for Malé city to expand,” explained Sultana.

This prompted the current government in the Maldives to consider decentralisation and the development of other inhabited islands by equipping them with civic facilities like hospitals and other institutions, that would incentivise people to relocate to other islands, reducing the burden on Malé. With this bridge, transportation and connectivity to the capital city would also improve, opening up an alternative route for transport, that has been a persistent issue for the country’s people. 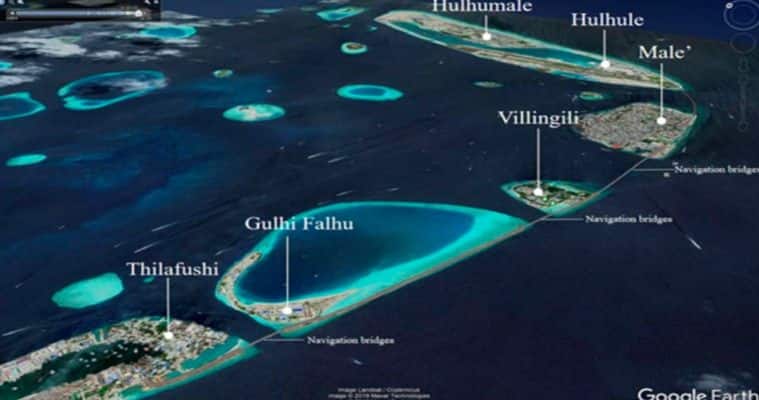 Photo credit: High Commission of India to the Maldives.

In the island of Gulhifalhu, a port is at present being built under the Indian line of credit. Located some 6 kilometers from Malé, since 2016, the island has been promoted by the Maldives government as a strategic location for manufacturing, warehousing and distribution facilities due to its proximity to the capital city. Back then, the government had also worked on installation of basic infrastructure, high-load capacity roads, water and sewage systems, telecommunications networks and electricity grids.

Located 7 km from the capital, the artificial island of Thilafushi was created and designated as a landfill in the early 1990s, to receive garbage created mostly in Malé. Over the past five to six years, the government began management of waste more effectively by using modern waste disposal methods instead of the original landfills. According to India’s High Commission in the country, this project was funded by India in a grant of $100 million, with a line of credit of $400 million. (Photos credit: High Commission of India to the Maldives)

That coincided with the establishment of industrial manufacturing and warehousing facilities on this island, that transformed it into a major industrial zone. The Maldives has plans of expanding industrial work on Thilafushi, making this bridge’s connectivity to the capital indispensable for the transport of employees and other services.

“After a five-year grace period, the interest rate is 1.75% and the Maldives has to repay it over a 20-year period. Of the $500 million, $100 million is a grant, while $400 million is the loan. India is investing so much and so we see the current government justify India’s loans as less expensive and more transparent, unlike China’s,” said Sultana, in a reference to Beijing’s debt-trap diplomacy.

Last year, when the agreement was first announced, former President of Maldives Mohamed Nasheed, who is the current Speaker of the Maldives’ parliament, had pointedly referred to China’s loans to the previous Yameen government in a tweet: “The super low cost development assistance announced by @DrSJaishankar today is exactly what Maldives needs. Genuine help from a friend, to help us build critical infrastructure. Rather than eye-wateringly expensive commercial loans that leaves the nation mired in debt. @PMOIndia.”

“Maldives hasn’t really been clear about how much debt they owe to China. Nasheed says that the Maldives owes $3.4 billion, but the Chinese ambassador to the country says it is just $1.4 billion,” Sultana said.

This $500 million has been given only for the Greater Malé Connectivity Project, with several millions of dollars committed by India for other community-focused projects in the country. “When India provides financial assistance, it is always demand-driven. The government of the Maldives decides what projects they want to use that money for,” Sultana explained.

Plans for this Greater Malé project date back to 2013, around the time the Chinese restarted work on the Sinamalé Bridge after a brief pause. When the Solih government came into power in 2018, India expressed interest in working on this project, along with the port in Gulhifalhu. “If India doesn’t do this, someone else would have done it—most likely China,” explained Sultana.

All that is at stake

This isn’t only about an ambitious project involving both India and the Maldives. The terms of the agreement call for the completion of the bridge by 2023. If Mumbai-based AFCONS fails to deliver on the deadline, potentially, it might not reflect well on bilateral relations. “That is a problem, because countries complain that India doesn’t deliver on projects and they tend to make comparisons with China,” said Sultana. For India, Maldives holds strategic importance and showing that it can deliver would help mitigate some concerns that may exist in the Maldives.

Then, there are also the 2023 presidential elections and the 2024 parliamentary elections in the Maldives. Recently, the India-friendly ruling Maldivian Democratic Party has witnessed a split, divided between Nasheed supporters and Solih loyalists.

“It would be in India’s interests to finish the project by 2023, because the MDP couldn’t win the last Malé council elections. Malé is a major seat because 40% of the population lives there,” Sultana said. If the opposition PPM were to come to power, it would be a cause for concern for New Delhi, because they are known to be more friendly towards China than India. “Even otherwise, it is in India’s interests to show that they can meet deadlines.”

At Byculla orphanage, 22, including four children, test positive for Covid-19