India Coronavirus Cases Numbers: As on Monday, 22.68 lakh people in India have been infected, out of which a little more than 45,000 have died. India Coronavirus Cases: Though far greater number of deaths due to novel Coronavirus are happening these days, the deaths as a proportion of known infected cases has been falling consistently, and has dropped below 2 per cent for the first time now.

As on Monday, 22.68 lakh people in India have been infected, of which a little more than 45,000 have died. In real terms, India has the fifth highest death toll in the world, after the United States, Brazil, Mexico, and the UK. However, the death rate, or case fatality ratio (CFR), is well below the world average of 3.7 per cent. 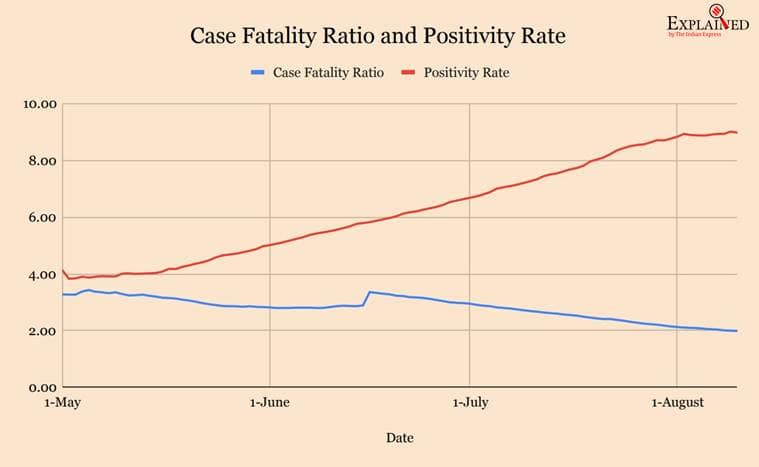 The Case Fatality Ratio and Positivity Rate in India

That is the reason why the real death rate of the disease is usually considered to be much lower than the CFR calculated when the epidemic is still on. When the epidemic finally ends, the death rate is likely to be below one per cent.

At the start of May, the CFR in India was about 3.2 per cent, meaning about 32 people out of every 1,000 persons found to be infected with the disease was dying. This number progressively declined till the middle of June when a few states, like Maharashtra, Delhi and West Bengal, began to reveal hundreds of previously unreported deaths that happened over the past several weeks. The CFR climbed up a bit but the has been on the decline again after that. But throughout this period, the CFR in India has been lower than the global average. That is because several countries in Europe, like the UK, Spain or Italy, had witnessed very large number of deaths even with comparatively lesser number of infections. Even in the United States, the CFR, at 3.16 per cent, is much higher than that in India.

An opposing trend is being seen in the positivity rate in India. This is the number of people who found to be infected out of the total number of people who are being tested. Positivity rate is a measure of how widespread the disease is in the community. If the disease is fairly widespread, more people are likely to turn out positive when they are tested.

But since the testing is not universal, it is also not random. In most states, testing is targeted towards those who have a greater chance of getting infected, like the direct contacts of already infected people. In this kind of testing, a much higher number of people are likely to be found positive compared to a random testing scenario.

In India, the positivity rate has been progressively increasing since the start of May, from about 4.14 per cent then to just over 9 per cent now. This is because of two reasons. The disease has actually become much more widespread, and as such a lot more people are testing positive now. Also, while many more people are being tested, the tests are still being carried out on targeted groups only. 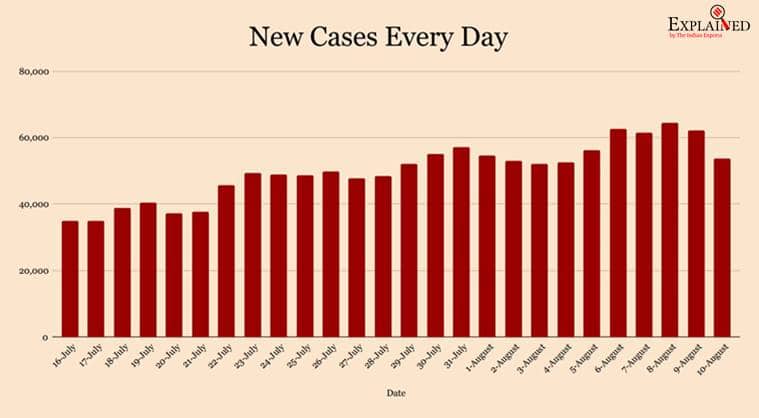 On Monday, there was a sharp decline in the number of people found positive in the country. After four days of 60,000-plus new cases, the number dropped to less than 54,000 on Monday. The drop could be a result of far lesser number of tests being carried out over the weekend. These days almost 7 lakh samples are being tested every day, but on Sunday less than 5 lakh were tested. The tests usually drop over the weekends.

Also in Explained | $100 billion needed to take vaccine to all, not even 10% raised, says WHO

Often called the ‘Paris of the Caribbean’, now Havana gets its own Eiffel Tower