Explained: In archives, reminder of Galwan in 1962 before the echo in 2020

India-China border dispute: Archives of The Indian Express from 1962 reflect how tensions unfolded in the same areas of Ladakh, particularly Galwan, that have been in the news in the last two months. 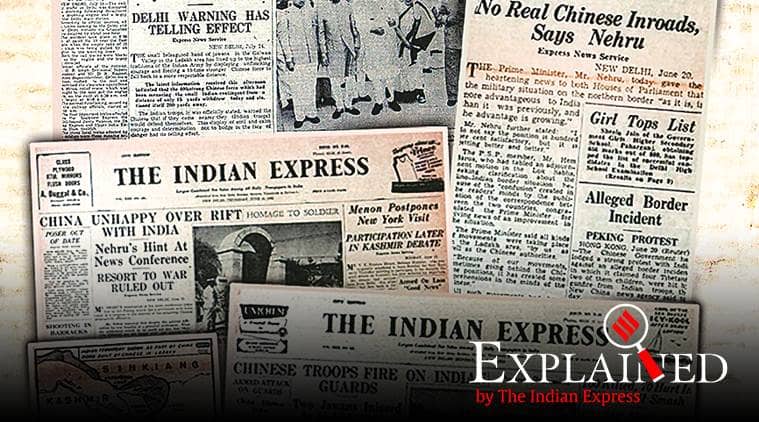 Archives of The Indian Express from 1962 reflect how tensions unfolded in the same areas of Ladakh, particularly Galwan, that have been in the news in the last two months. (Archive)

In July 58 years ago, Indian and Chinese troops were taking steps towards disengagement on the Line of Actual Control. On July 15, 1962, The Sunday Standard ran its front-page lead report with the headline ‘Chinese Troops Withdraw From Galwan Post’. And on July 8, 2020, The Indian Express headline on the current steps towards disengagement ran: ‘After Galwan Valley, troops on both sides start pulling back in Hot Springs sector’.

Archives of The Indian Express from 1962 reflect how tensions unfolded in the same areas of Ladakh, particularly Galwan, that have been in the news in the last two months.

China has charged India with setting up Army posts on its territory; India has denied it.

Report: The Indian Express reports the government’s rejection of the Chinese assertion that the Indian Army has set up two new posts in Sinkiang-Uighur of Chinese territory. It says India has protested against establishment of a post in Chip-Chap river and that China had ordered aggressive patrolling by its forces from Karakoram Pass on one end of the border to Kongka La on the other. 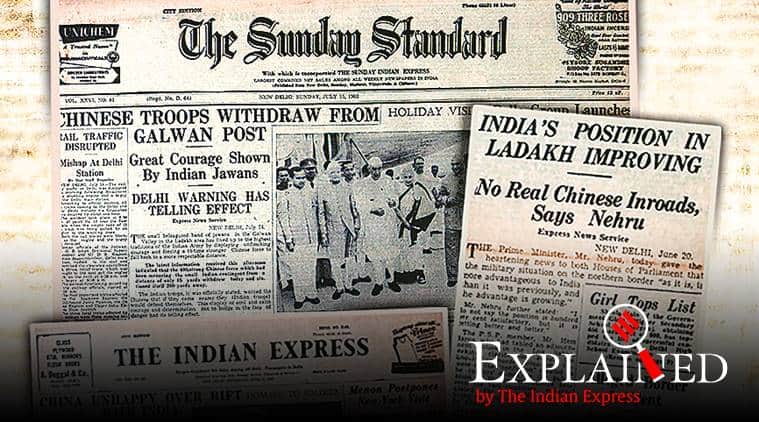 The Indian Express headline on the current steps towards disengagement ran: ‘After Galwan Valley, troops on both sides start pulling back in Hot Springs sector’.

Report: The headline notes that the PM rules out war and also that China is ‘unhappy over rift with India’. Nehru is quoted as saying that “they (China) are not happy with our present relations”. The PM also says the Chinese have crossed into large chunks of Indian territory in Ladakh.

Notes are exchanged over incursions in Ladakh and NEFA

Report: ‘India’s Defences No Menace to Chinese’, says the headline, adding that the Chinese charges of intrusion in Ladakh have been repudiated by India. The report highlights the government’s statement to China about incursions in Ladakh as well as a village in the eastern sector, along with the fact that India and China have “exchanged notes”.

Nehru’s statement in Parliament about situation getting better in Ladakh

Report: Front page reports PM’s speech that the military situation on the northern borders is more advantageous to India than it was previously “and the advantage is growing”. It quotes Nehru as saying, “I do not say the position is hundred percent satisfactory, but it is getting better and better”.

India reiterates it will not accept Chinese demands to withdraw posts in Daulat Beg Oldie, asks for mutual withdrawal of forces

Report: Headline declares ‘India Not To Abandon Posts in Ladakh’; ‘Armed Clash Threat By Peking Deplored’. The report quotes Nehru as saying that a fear complex has gripped China. The then Deputy External Affairs Minister, Dinesh Singh, is quoted as saying that India had asked China for mutual withdrawal of forces in a note dated May 14.

Report: It refers to a post in Galwan valley surrounded by 400 Chinese troops. It notes that the lower reaches are not only well inside Indian territory but also 28 miles from the claim line shown by the Chinese 1956 map about which Premier Chou En Lai had written to Nehru on November 17, 1959. Referring to a Chinese memorandum of June 8, the Indian government is quoted as saying, “If as claimed in the Chinese memorandum, the Chinese troops have infiltrated and set up a post in the lower reaches of Galwan river it is a serious violation of Indian territory. It must be vacated.”

Report: A map of the Northern borders is published on the front page, with a cross marking Galwan valley position encircled by the Chinese. “Should the Chinese attack the Indian Post here, the Indian forces will retaliate appropriately,” a Ministry of External Affairs spokespeson is quoted as saying.

Report: ‘China Warned Against New Moves in Galwan’ reads the headline. Report quotes the Indian government as saying the Chinese troops are now only 50-70 yards from Indian troops in Galwan post.

Chinese troops withdraw some distance from the Indian post

Report: It quotes officials as saying that great courage was shown by Indian jawans in the face of Chinese troops 15 times stronger and that the warning delivered by Delhi to China had a telling effect. Asked if there will be a major clash, Nehru is quoted as saying, “There is a risk of clash but not a major one”. Another report states the government’s position that Aksai Chin was never part of China.

Report: Headline notes the situation is still tense. An MEA spokesperson is quoted as saying the Chinese have withdrawn 200 yards and are 400 in number. Another report notes that the Chinese have alleged that India has set up three posts at Sirijap on the banks of Pangong Lake about 2 km inside Chinese territory, at Yula on the Southern bank of the lake “over ten km within China”, and northwest of Nyugzu “about five km within China”.

Report: The headline notes Chinese troops have fired on Indian guards and two jawans have been injured in Ladakh valley. The report says the “Indian party exercised restraint and did not fire back” in Pangong area. At Chip Chap river, an Indian patrol was attacked with light machine guns, rifles and two-inch mortars and this time returned fire.

Report: ‘Chinese Bid to Set Up Base in Galwan’ — the report says the government has urged that Chinese forces stop interfering with the communication and supplies to the Indian post and withdraw peacefully.

Report: The headline reads ‘Border Talks Only If Aggression Is Vacated’. Nehru is quoted as saying Galwan garrison would be relieved soon by a column sent by road.

Hereafter, developments in the Northeast would take centrestage. On October 19, 1962 the Chinese launched an offensive in Ladakh and took over Chip Chap valley, Galwan valley and posts in Pangong.

Behind market rebound: What explains this trend, and how likely is it to sustain?