The Prime Minister enhanced India’s existing climate targets and announced a new one during his speech in Glasgow. None of these are beyond the country’s reach. 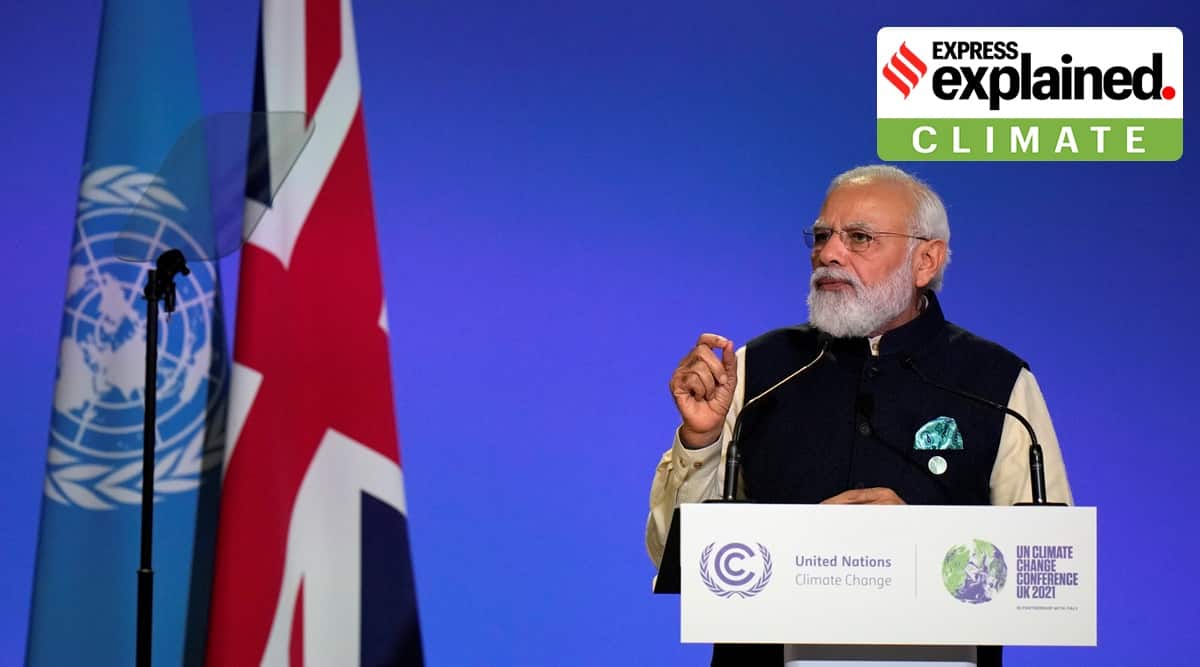 Speaking at the UN climate conference in Glasgow earlier this week, Prime Minister Narendra Modi shortened the timeline on the country’s existing climate targets, and announced a few new targets as well. Modi’s announcements underline India’s commitment to the fight against climate change — and importantly, none of the targets are likely to be too difficult to achieve.

Of the five-point targets announced by Modi on Tuesday (November 2), achieving net-zero emission status by 2070 is the one with least clarity as of now. This is because this promise seems to have been made primarily to satisfy the international demand. At the same time, 2070 is a long way away — and there is plenty of time to plan a roadmap to achieve that target.

The other four targets have to be achieved in a much more immediate timeframe, by 2030.

Two of these, about reducing emissions intensity and increasing the renewable mix in electricity generation, are already part of India’s official climate action plan, called the Nationally Determined Contributions or NDCs, that has been submitted as part of the requirement under the Paris Agreement.

In that NDC, submitted in 2015, India had promised to reduce its ‘emissions intensity’, or emissions per unit of GDP, by 33 per cent to 35 per cent from 2005 levels by the year 2020. Also, India had said it would ensure that at least 40 per cent of its installed capacity of electricity generation in the year 2030 would come through non fossil-fuel based energy sources.

Both these targets have been enhanced by Modi. The emissions intensity reduction target has been raised to 45 per cent, and the share of renewables in installed electricity capacity has been increased to 50 per cent.

There was some confusion about the renewables target because of the words used by Modi during his speech. The Prime Minister said India intended to fulfil 50 per cent of its energy requirement through renewable energy by 2030. This came as a surprise, since electricity is only one part of the larger energy basket, and all previous commitments were formulated for electricity generation, not energy.

A senior official of the Environment Ministry has since confirmed to The Indian Express that the enhanced target indeed related to installed electricity capacity and not energy requirement. This will be correctly reflected in the revised NDC that India will submit to the UN Climate secretariat incorporating the new targets.

India was already on course to achieve both these existing targets well before the 2030 deadline.

India’s emissions intensity was 24 per cent below 2005 levels in 2016 itself, the latest year for which official data are available. A 33-35 per cent reduction is expected to be achieved within the next two years.

Although initial reductions are much easier to achieve than later ones, achieving a 40 per cent reduction is not expected to pose too much of a challenge.

The case of renewable installed capacity is also not very different.

By November 2020, the share of renewables, including large hydropower, in total installed capacity of electricity generation had already reached over 36 per cent, according to government data. The share of non-fossil fuel energy sources was over 38 per cent. Most of the new capacity additions are happening in the renewable space, and therefore taking this share to 50 per cent will likely not be too difficult.

Incidentally, the third promise made in India’s NDC, about increase in forest cover, did not find a mention in Modi’s speech in Glasgow. And that is the only target that India is struggling to achieve.

In the NDC, India has promised to create an additional carbon sink of 2.5 billion to 3 billion tonnes of carbon dioxide equivalent through forest and tree cover by the year 2030. Although India’s forest cover has been growing, according to official data, the pace of growth as of now is far from being commensurate with what is required to achieve the target.

The two other announcements made by Modi, about raising installed capacity of renewable energy, and an absolute reduction of 1 billion tonnes of carbon dioxide by 2030, are not part of India’s existing commitments, but are nonetheless linked.

India had initially set out to install 20 GW of solar power capacity by the year 2020. That was later raised to 100 GW by 2022. Targets for wind and biogas were subsequently added, making it a renewable energy power capacity target of 175 GW for the year 2022. Two years ago, Modi enhanced this to 450 GW for the year 2030. None of this was ever part of the NDC, though. These were publicly-announced targets that India had set for itself.

In Glasgow, Modi said India would have 500 GW of non-fossil fuel-based energy capacity by the year 2030. Non-fossil fuels include not just renewables like solar or wind, but also nuclear and hydro, which together make up over 50 GW right now. That means that there is little change in the 450 GW target for renewable energy. Achieving that would automatically achieve the target of 500 GW for non-fossil fuel energy sources.

Also, nuclear energy itself is in the process of a significant ramping-up. Installed nuclear power capacity is set to increase to 22 GW by the year 2031 from the current 7 GW.

The fifth target announced by Modi was new and entirely unexpected. The PM said India would ensure that it reduces 1 billion tonnes of emissions from its projected emissions between now and 2030.

Put another way, India would bend its business-as-usual emissions trajectory to ensure that at least 1 billion tonnes of emissions are saved.

This is the first time that India has talked about making a reduction in its absolute emissions. All previous formulations used to be in terms of emission intensity, which is intensity per unit of GDP.

However, the 1 billion tonne reduction promise is not unrelated to the emissions intensity target. In fact, they seem to be inextricably linked.

Achieving the emission intensity targets would mean that India would be emitting far less than in the business-as-usual scenario. The numbers are not immediately evident, but this saving in emissions could form a substantial chunk of the 1 billion tonne reduction that has now been promised. It is possible that it may even exceed 1 billion tonnes.

The promise to reduce 1 billion tonnes of emissions could, therefore, just be another way of reiterating the emission intensity target.

US offers $10 million reward in hunt for DarkSide cybercrime group