In tale of drugs, guns: Reason why end of war might not mean peace for Myanmar 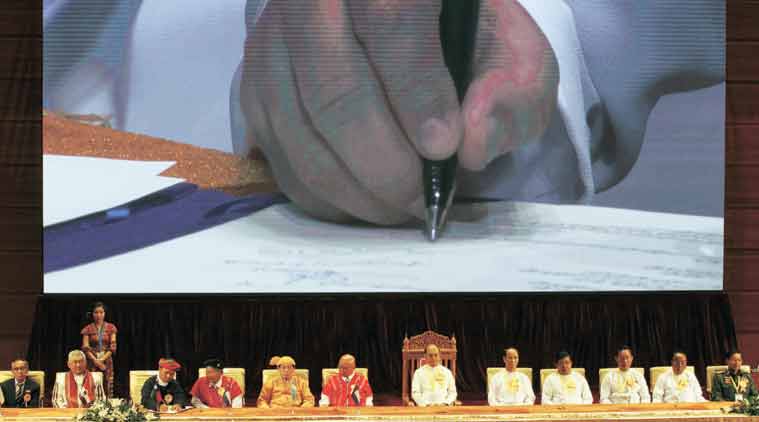 The hand of a leader of an armed ethnic group is seen on a screen as he signs the Nationwide Ceasefire Agreement Thursday. Myanmar President Thein Sein is seated sixth from right, with officials, rebel leaders and international witnesses. (Source: Reuters)

“OLIVE’S BOYS”, they were called — the army of a thousand men who, led by a demure graduate of the Guardian Angel Convent School in northern Myanmar’s Lashio town, built the Golden Triangle, the great drug empire that rose from South East Asia’s jungles. Leading the Kokang Kakweye, or Kokang People’s Defence Force, Olive Yang ruled the region from the 1950s with steel and blood — her very public bisexual affairs with Myanmar’s top singers and movie stars evidence of her status.

The government of Myanmar on Thursday signed a peace deal that it hopes will get the drug emperors into the country’s political system. The agreement — signed at a function attended by India’s National Security Advisor, Ajit Doval, and other international representatives — locks seven insurgent groups into a ceasefire ahead of elections due next month.

The bad news is that the biggest narco-insurgent groups — the United Wa State Army, Kachin Independence Army, and Shan State Army-North — have declined to join the ceasefire. The main opposition party, National League for Democracy, also declined to sign the agreement as a witness — even though party representative Win Htein did attend the ceremony.

From the surreal history of the drug emperors, as strange as any dark opium dream, there’s reason to fear this: even an end to the war in Myanmar may not mean the beginning of peace.

Even as Myanmar’s army has been talking peace, it has also been waging war, hoping to beat the holdouts into submission. Early this month, at least 10 battalions, backed by artillery, launched a largescale offensive against Shan State Army-North units in Mong Hsu and Kyethi. The fighting, triggered by the SSA-N’s refusal to vacate a strategic river port at Tar San Pu near Kyethi, has sent thousands fleeing to surrounding areas, or into the jungles. 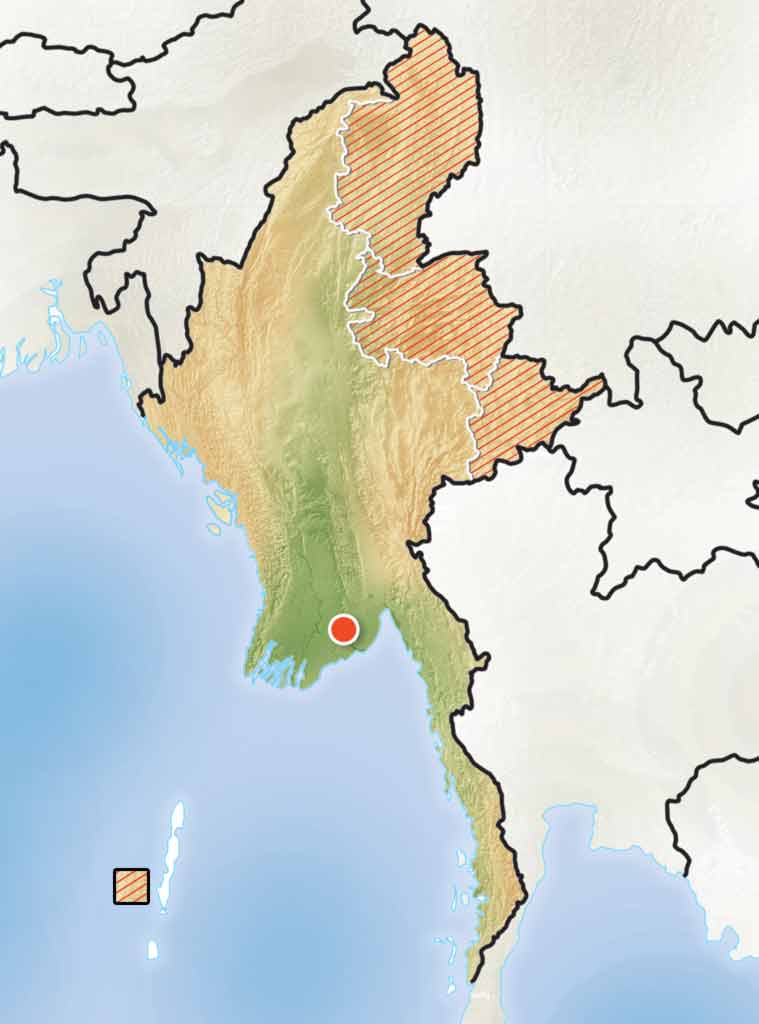 “The displaced are staying at monasteries or the houses of friends and relatives,” Shan state civil society activist Sai Khur Hseng told local media. “Women who have given birth to babies are suffering from malnutrition.”

In February, fighting broke out in Kokang — a semi-autonomous buffer region between Myanmar’s Shan state and China’s Yunan — shattering a 2012 ceasefire agreement. Insurgents from the Myanmar National Democratic Alliance Army — led by Pheung Kya-shin, who was ousted from the region by a government-backed militia in 2009 and has since been living in China — launched attacks against government troops who were trying to consolidate their positions around Mawhtike and Tashwetan.

Cadres of the Ta-ang National Liberation Army, Arakan Army United Wa State Army and National Democratic Alliance Army joined in on the insurgent side, forcing the government to declare an emergency, and authorise airstrikes. The Myanmar National Democratic Alliance Army soon buckled under, and agreed to a ceasefire. The fighting ended — but left the insurgents in control of large swathes of opium-producing territory.

The rise of the Golden Triangle empire dates to the late 1940s — to the Kuomintang Chinese nationalists, who were then seeking to overthrow the communist regime. Tuan Shi-wen, a key Kuomintang military commanders, explained: “We have to continue to fight the evil of communism and to fight you must have an army, and an army must have guns, and to buy guns you must have money. In these mountains, the only money is opium.”

In the 60s, the anti-communist struggle long over, druglords like Olive Yang brought in skilled chemists from Hong Kong and Taiwan to set up modern drug labs — feeding the world’s growing demand for heroin.

General Ne Win’s rise to power in 1962, promising a “Burmese way to socialism”, led the druglords to untold wealth. Largescale nationalisation bankrupted the economy, leaving the national currency worthless. The druglords cashed in, using opium for trade with Thailand, Laos and China.

In 1989, the authority of the Kokang insurgents’ older generation, which had generally kept the peace with the regime, broke because of internal rebellions. Multiple new militia formed, each with distant spheres.

Fearful that these new groups would aid ethnic insurgents, or worse, give weapons to the democratic resistance, the military junta in Yangon rapidly cut a deal. Helped by Lo Hsing-han, a former Kokang warlord, the generals agreed to let the militia run drugs unhindered, in return for their signing ceasefire agreements.

Lo himself was released from prison to form a militia — and he ended up running a multinational corporation with his son Stephen Law, which, declassified United States diplomatic correspondence suggests, was known to launder drug money.

Olive Yang was also put to work at peacemaking — and her successes placed her at the heart of Yangon’s high society for decades, until she eventually retired to a nun’s life.

Inside a year of these peace deals, the scholar and journalist Bertil Lintner has recorded, “intelligence sources were able to locate at least 17 new heroin refineries in Kokang and adjacent areas, six in the Wa Hills and two on Lin Mingxian’s (Sai Lin’s) area north of Kengtung, where the town of Möng La opposite Daluo in Yunnan developed into one of the most important drug-running centres in the country”.

Predictably, as the tide of public opinion turned ever more hostile to the military regime, the druglords worked ever more closely with the regime — even handing over pro-democracy activists hiding in their territories.

The estimated total amount of opium produced in the area in 2014 is approximately 762 tonnes, with the overwhelming majority of cultivation continuing to take place in Myanmar”.

In Yangon, massive new buildings mark the rise of new empires: of gemstones, timber, liquor, paints airlines and banking. Many of these, according to the US Drug Enforcement Administration, are built on heroin earnings — among them, Kyaw Win’s May Flower Group, Yang Maoling’s Peace Myanmar Group, Kyaw Myint’s Myanmar Kyone Yeom, and surrendered druglord Khun Sa’s Good Shan Brothers.

It is, the generals might say, the price of peace. The generals still have to find a way, though, to buy the druglords for whom the price hasn’t, so far, been right.