In death on fence, a reminder: no easy solution to human-elephant conflict

The elephant that died had been on its way back to the forests after raiding the cropland adjacent to the tiger reserves’s Veeranahosalli range. 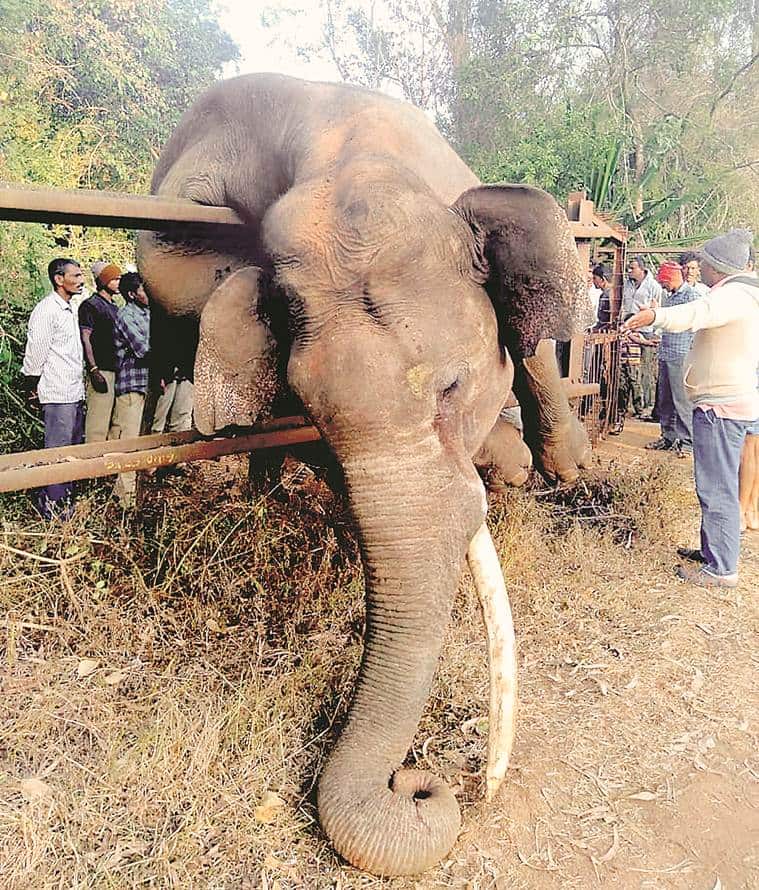 The elephant died while trying to scale a fence in Nagarhole.

Last week, an elephant died while trying to scale an iron fence in Nagarhole, Karnataka. When the fence was meant to separate elephants from human habitation, the tusker’s death underlined the difficulties in finding a win-win solution to human-elephant conflict where territories overlap.

Elephants are the most persecuted wildlife in India. They are large, need a lot of resources and move long distances to forage. The space they traditionally used is now crowded by people. Unwelcome on their erstwhile turf, elephants kill more people than any other wildlife. The herbivore does not come after people but raids their crop. The farmer’s narrow choice between life and livelihood leads to violent resistance.

The elephant that died had been on its way back to the forests after raiding the cropland adjacent to the tiger reserves’s Veeranahosalli range. In 2015, it was at Veeranahosalli where Karnataka launched its ambitious rail fence project to mitigate human-elephant conflict.

While local foresters always kept a gate open for such retreating elephants, villagers possibly rushed the tusker. But the elephant could climb atop the fence only because its height was not raised even after an alarm was sounded last year.

In 2014, the state forest department decided to construct 10-foot-high permanent barriers with used railway tracks between farmland and elephant forests. In April 2017, however, sequential images of a large bull crossing a rail fence made headlines and the forest department acknowledged the necessity to build higher fences and also increase the height of the existing segments with a solar barrier on top.

It turns out that they forgot the oldest stretch. The Veeranahosalli segment of the rail fence was the pilot project, said Karnataka chief wildlife warden C Jayaram, where a 10-km stretch remained lower than the stretches constructed subsequently.

Elephant movements can be classified as daily and seasonal. Following rainfall patterns, they can move daily following a specific route in a seasonal migration. They may also move daily out of forest cover to raid adjacent cropland in the night and return before the sunrise.

Last August, when the Supreme Court ordered removal of 39 resorts to free an elephant corridor in the Nilgiri Hills, it was protecting the 22-km-long wildlife passageway that allows elephant movement between the Western (June-September monsoon) and the Eastern (October-January monsoon) Ghats.

Besides buildings, linear and other physical infrastructure is increasingly blocking or cutting across such corridors all over the country. Of 100-odd identified elephant corridors in India, at least 70 are left with a width of 1 km or less. Loss of these passages will isolate populations and reduce their genetic viability.

Daily local raids, on the other hand, is a question of immediate survival on both sides. Elephants must eat and farmers must save their crop. It is rarely a forest famine that drives forest elephants to raid farmland; manmade food is more nutritious (and perhaps tastier) and thus allows a herd to cut down on foraging time and save energy.

Since cutting access to farmland is unlikely to starve forest elephants, the strategy has been to build barriers such as solar fences and elephant-proof trenches. But elephants find their way around these high-maintenance obstacles. They fill trenches with mud and use logs to avoid touching powered wires.

In the absence of any effective deterrence, farmers use a range of ad hoc means — from relatively harmless bursting of crackers to extreme practices such as throwing fire torches or burning tyres on the animals. They also electrocute and poison elephants.

Therefore, sturdy rail fences were proposed as a lasting solution.

It helped that the gaps between the rails allowed movement of other wildlife and even let people access forest produce. But the fence was not designed in a way that discouraged misadventures such as climbing over, squeezing through or sliding beneath that could endanger an elephant.

Besides, the fences are being put up in high-rainfall areas and, like other barriers, may need substantial maintenance as earth sinks. But unlike construction, maintenance is more about rigour than funds which makes it a thankless job.

A rail fence cannot work with elephants on both sides. That is what happened the night the tusker died. As long as the fencing project is implemented piecemeal, elephants will use the unfenced stretches to venture out only to find themselves fenced out. Worse, drawing any elephant line in areas with scattered herds will only aggravate conflict.

It may be less complicated to plan for places where elephants live in entirely non-forested areas and depend solely on private resources. But building an extended fence to ensure no spillover takes place in the future and simultaneously relocating all the animals from private land will be exorbitant. A fight over who would control the funds is apparently why such a project is yet to take off in Karnataka’s Hassan district.

Many activists and conservationists harp on letting the elephant be. The proposition is wishful. It will take a lot more than removing spikes (elephants are smart enough to avoid those anyway) or banning flame throwing to ensure a less violent coexistence. It will require people to surrender space to elephants.

Compensating the farmer at market rates for crop loss may reduce his desperation but a lack of resistance will invite more elephants to cropland and keep expanding the conflict zone. Allowing the elephant a free run has immense economic (and safety) implications and authorities are unlikely to even consider those.

In such a scenario, conservation’s best bet is perhaps to free up the elephant’s seasonal corridors and minimise human-elephant interface through non-violent means. To that effect, robust and effective barriers demand serious studies in efficacy and fine-tuning, not the stigma of an elephant-killer.

Mumbai: Ahead of Maratha quota hearing, lawyer says won’t be cowed down by threats