Explained Ideas: Why Pakistan must not stall construction of a Krishna temple in Islamabad

Religion has got Muslims their Pakistan but mathematics remains the weakest subject taught in their schools and universities, writes Khaled Ahmed 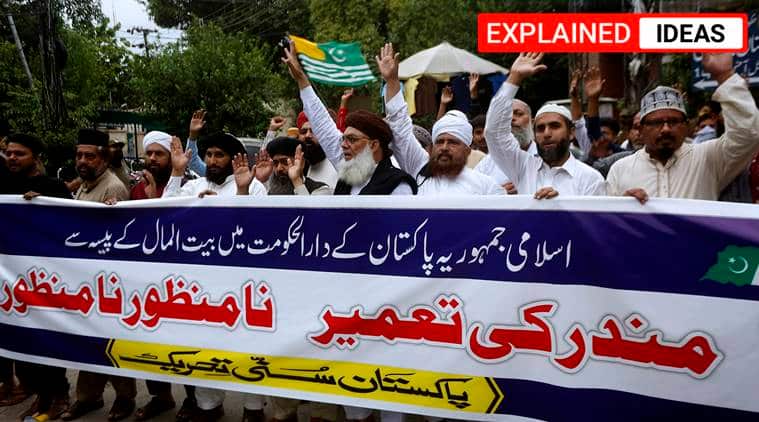 Supporters of the religious group, Sunni Tehreek Pakistan, carry a banner in Urdu that reads, “we disapprove the construction of Hindu temple in the Pakistani capital with government funds”, during a demonstration in Lahore, Pakistan, Sunday, July 12, 2020. (AP Photo: K.M. Chaudary)

In his latest column in The Indian Express, Khaled Ahmed, the consulting editor of Newsweek Pakistan, writes that “PM Imran Khan should not stop the project of building and repairing all the Hindu temples today seen in a dilapidated state in Pakistan”.

The “project” in question is the construction of a Krishna temple — the first-ever in Islamabad.

Ahmed explains the issue in detail. “In 2018, an allotted piece of land for a Shri Krishna Mandir in Islamabad was attacked and occupied by clerical protesters saying a Hindu structure could not be built in a city named after Islam. In June this year, under the government of Imran Khan, the project was restarted with a first funding instalment of $1.3 million”.

But the “protesters” reappeared, egged on by the big seminaries in Karachi, saying Islam would be insulted by it, and disappointing Lal Chand Malhi, a Hindu parliamentarian and member of the ruling party, the Pakistan Tehreek-e-Insaf (PTI). Malhi had thought the Krishna temple would clean up the image of an ideological state guilty of maltreating its minorities.

“Sadly, Pakistan Muslim League (Quaid-e- Azam) — a key ally of the ruling PTI — joined the frog-chorus of the pious and forced another halt to the construction of the first-ever Hindu temple in Islamabad,” he writes.

Even so, the Capital Development Authority (CDA) had transferred ownership of the plot to the Islamabad Hindu Panchayat; and a small groundbreaking ceremony for the temple construction had taken place at the end of June, attended by the federal minister for religious affairs and representatives of the Hindu community.

“Pakistan must recall the golden age when Muslims and Hindus benefited from each other,” says Ahmed, who gives several examples showing that Muslims had treated Hindus with great respect in history.

“Religion has got Muslims their Pakistan but mathematics remains the weakest subject taught in their schools and universities. Lahore’s FCC University recently fired Pervez Hoodbhoy from the department of math and physics because of his “rational” objection to the state’s ideology. In foreign policy, Chanakya’s mandala of inter-state relations recommends good relations with the “first circle” of neighbouring states,” he states.

Justice Banumathi says she herself was victim of court delay