For many years after it was first launched in 1991, these exercises were bilateral, involving the Indian and the Maldives Coast Guards. In 2012, however, Sri Lanka joined these exercises for the first time 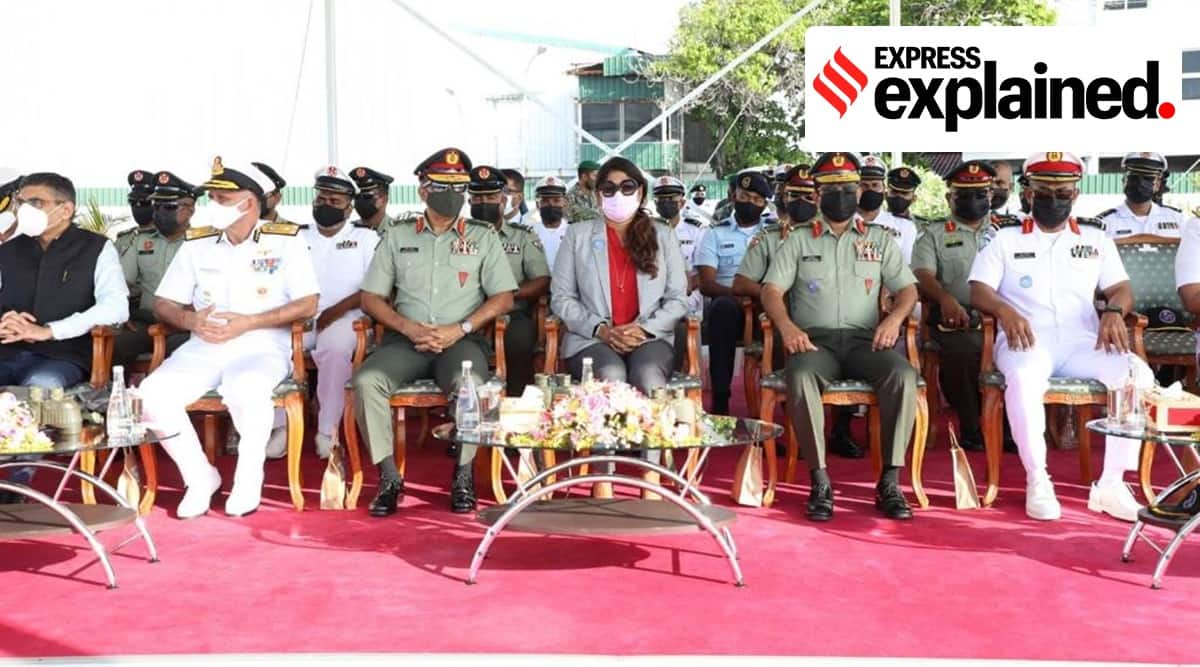 These exercises help during joint operations and missions undertaken by countries and also help enhance interoperability. (Twitter/Ministry of Defence)

The 15th edition of the biennial trilateral coast guard exercise ‘Dosti’ involving India, the Maldives and Sri Lanka is underway in the Maldives. 2021 marks 30 years since these exercises were first launched. Indian Coast Guard vessels, the ICGS Vajra and ICGS Apoorva joined the Sri Lanka Coast Guard, SLCGS Suraksha for the five-day exercise that started on November 20 and will conclude today.

In a statement, the Indian High Commission in the Maldives said, “The aim of India-Maldives-Sri Lanka tri-lateral exercise ‘Dosti’ is to further fortify the friendship, enhance mutual operational capability, and exercise interoperability and to build cooperation between the Coast Guards of Maldives, India and Sri Lanka.” Both the Maldives and Sri Lanka are of strategic importance to New Delhi and to its maritime security interests.

Why this is important

“India does have these kinds of military exercises with other countries. Sometimes it is multilateral, sometimes it is trilateral. For many years these exercises were bilateral,” said Dr. Gulbin Sultana, a research analyst at the Manohar Parrikar Institute for Defence Studies and Analyses, whose area of research includes the Maldives.

For many years after it was first launched in 1991, these exercises were bilateral, involving the Indian and the Maldives Coast Guards. In 2012, however, Sri Lanka joined these exercises for the first time and since then, it has been a trilateral exercise.

Much excitement & energy was packed into the main exercise & steampast of Dosti XV at Usfasgan’du Area in Male’ today. Chief Guest, Hon. Minister of Defence @MariyaDidi interacted with local students, who claimed they were thrilled to witness the dynamic drills & displays. pic.twitter.com/gw2RI7zm8q

These exercises help during joint operations and missions undertaken by countries and also help enhance interoperability, Dr. Sultana told indianexpress.com. Although piracy is not a major issue in this part of the Indian ocean, these kinds of exercises also help coast guards with training for possibilities.

The scope of these exercises are wide-ranging. “If there is a maritime accident, or if there is an ecological disaster like an oil spill, sometimes the coast guard of one nation cannot tackle it alone,” she explained.

These exercises help develop a better understanding of the other nation’s coast guard operations and how to enhance coordination during different kinds of missions. “Maritime security is a kind of thing where you need cooperation and one nation, one coast guard can’t do much,” Dr. Sultana explained.

There are limitations and regulations involving international law, for instance the Exclusive Economic Zones (EEZ). Then there is the continental shelf which also has specific rules. Under international law, as stated in Article 76 of the Law of the Sea Convention, this maritime zone consists of the seabed and subsoil that extends to the outer edge of the continental margin, or to a distance of 200 nautical miles if the outer edge of the continental margin does not extend up to that distance.

According to a document issued by the US State Department, “The continental shelf and the exclusive economic zone (EEZ) are distinct maritime zones.” The extended continental shelf is not an extension of the EEZ, the document states. “Some of the sovereign rights that a coastal state may exercise in the EEZ, especially rights to the resources of the water column (e.g., pelagic fisheries), do not apply to the ECS.”

Highly impressed by the grandeur of the joint ‘Steam-Past’ today morning. Hats-off to the proficiency, skill and expertise demonstrated by participants of Ex DOSTI XV. Every aspect of the drills, demos and Steam-Past was executed to perfection. pic.twitter.com/JYRjJEpab3

There are various provisions and clauses that state the circumstances in which a nation can enter these zones in waters of other nations, and joint exercises help with developing an understanding of these specifics, Dr. Sultana said. “The countries join when there are common threats in the Indian Ocean. At that time, interoperability is important.”

In August this year, during a virtual meeting of top security officials, India, Sri Lanka and the Maldives agreed to work on what they called the “four pillars” of security cooperation. These involved the areas of marine security, human trafficking, counter-terrorism and cyber security.

Nine months prior to this meeting in August, India’s National Security Adviser Ajit Doval had visited Colombo for deliberations with Secretary to Sri Lanka’s Ministry of Defence, Kamal Gunaratne, and Defence Minister of the Maldives, Mariya Didi, during which the three nations had agreed to expand the scope of intelligence sharing. This meeting between the three top security officials was important because it had marked the revival of NSA-level trilateral talks on maritime security in the Indian Ocean region after six years.

DG of @SLCoastGuard RAdm Anura Ekanayake & @IndiaCoastGuard ADG V.S.Pathania called on Min. @MariyaDidi. Min. thanked them for their presence in 🇲🇻 despite Covid & for their respective Govts’ role in making Dosti the longest-running, most successful Joint Exercise in the region. pic.twitter.com/Q9ucbNrtFD

This NSA-level maritime security cooperation is important for relations between India and the Maldives and India and Sri Lanka. “It is always better if the navies (and the coast guards) of the three countries understand how they each operate. So this is why these exercises are important,” said Dr. Sultana.

Special gesture for a time-honoured partnership!

Defence Minister @MariyaDidi has embarked on a visit to India; she will be the first Foreign Defence Minister to Review Passing out Parade at the Indian Naval Academy. HC @AmbMunu saw off Minister prior to departure.
(1/2) pic.twitter.com/gTFLwzzHBi

Didi’s visit to India comes two days after Mahawar met with Didi to discuss bilateral ties between India and the Maldives. During her visit in India, Didi will also be meeting with Maldives National Defence Force personnel undergoing training in India, the High Commission of India in the Maldives had said. “During Didi’s visit, there may be discussion with her counterparts on enhancing security and defence cooperation,” said Dr. Sultana.