ExplainSpeaking: What the IMF said about the Indian, global economy 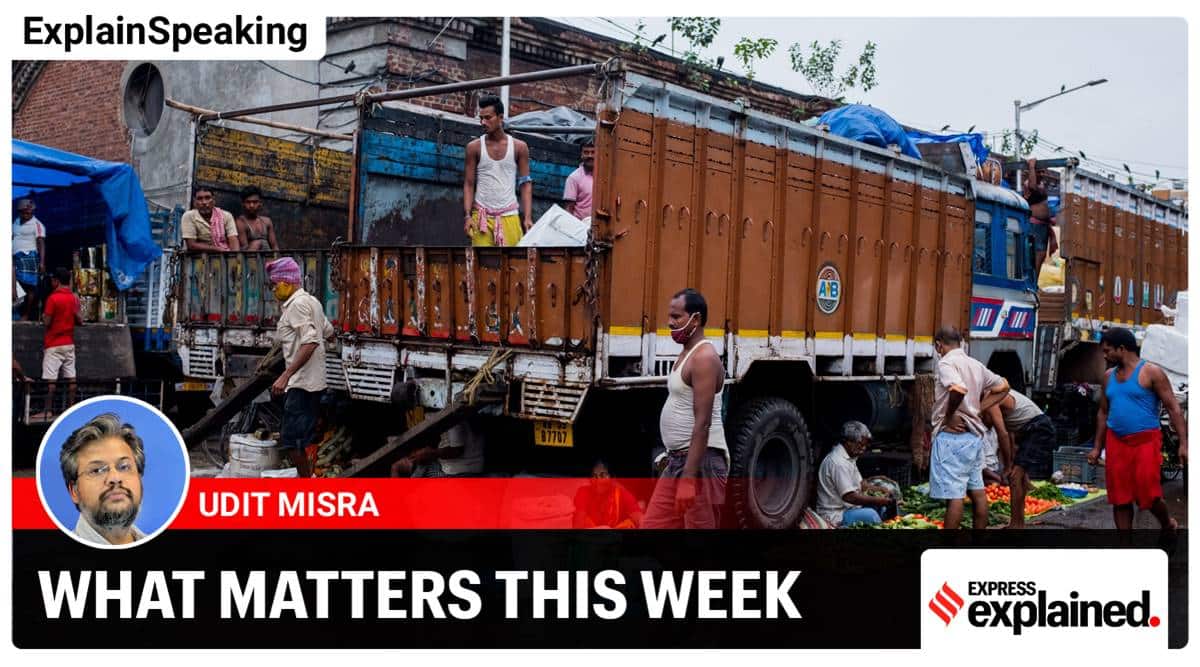 One of the more interesting quotes is attributed to David Lloyd George, the British Prime Minister during World War I.

“Don’t be afraid to take a big step if one is indicated. You can’t cross a chasm in two small jumps”.

A case in point was the dramatically different approach adopted by Kings XI Punjab and Mumbai Indians while chasing targets during the two back-to-back super overs on Sunday night.

It appeared Mumbai — who were chasing half the runs that Punjab eventually chased in the second super over — hoped that singles ought to do it so why strain themselves. End result: They failed to make 6 runs in 6 balls, all the while as their biggest gun — Kieron Pollard — was sitting in the shed with his pads on.

This newsletter (if you haven’t subscribed click here), of course, is about the Indian economy but here too the story has been eerily similar.

If you have been following the policy choices of the government since the start of the Covid-19 pandemic, you would have read a lot about how the government has not done enough on fiscal policy — that is, directly spending from its own account — and largely hoped that Reserve Bank of India’s monetary policy — via lower interest rates and more money for loans — would instead revive the economy.

A decidedly emphatic fiscal response would have been akin to sending the hard hitters while the approach of hoping that lower interest rates will lure businesses to invest (even when there was no demand) in the economy was akin to hoping singles ought to do it.

That is why regular readers of ExplainSpeaking would not have been surprised when it became clear that India was one of the worst-affected major economies in the world.

Of course, notwithstanding the official data, this fact — that India has been one of the worst affected — has been contested repeatedly.

In this regard, the recent release of the International Monetary Fund’s (IMF) World Economic Outlook (WEO) provides some more buttressing evidence.

First up, the chart below shows how industrial production was hit in some of the key economies of the world. As can be seen, India took the deepest hit. 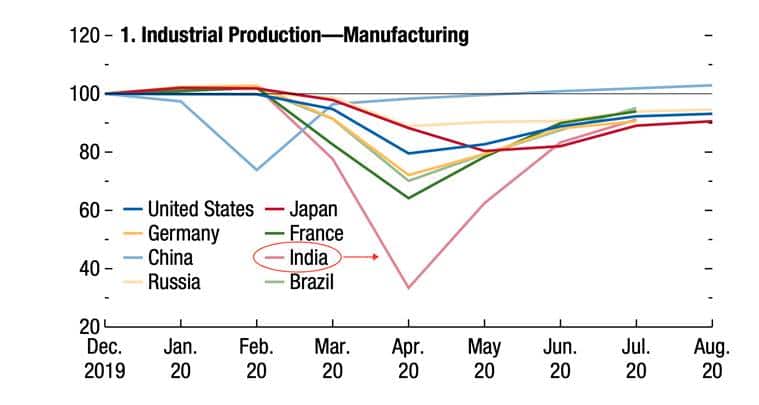 As can be seen, India took the deepest hit.

The IMF has mapped the percentage difference in economic activity between its January and October WEO updates. As such, the farther away a country is from both the X and Y axes, the worse off it is in the wake of the pandemic.

As can be seen from this chart, the IMF expects India to be not just the worst-affected in the short term but also in the medium term. It is crucial to note that the medium term ends with the end of the current government.

Most of the economies that India typically compares itself to — such as China (CHN), US (USA), Pakistan (PAK), Indonesia (IDN) and Brazil (BRA) — are likely to be less affected.

You can read this explanation to understand how this happened and what is its significance: Why comparison between India, Bangladesh per capita GDP has caught everyone’s attention 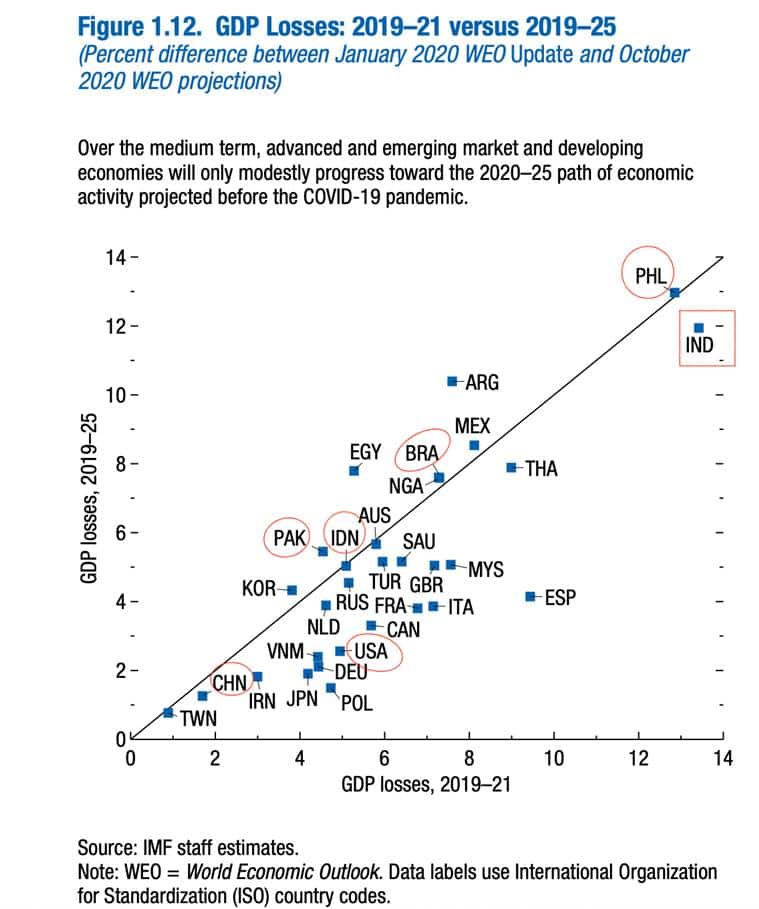 Most of the economies that India typically compares itself to — such as China (CHN), US (USA), Pakistan (PAK), Indonesia (IDN) and Brazil (BRA) — are likely to be less affected.

As it happened, IMF’s WEO update received the maximum attention for its finding that in 2020 Bangladesh’s per capita income will be higher than India’s per capita income. You can read this explanation to understand how this happened and what is its significance.

Beyond India, however, the WEO update had several other key pointers that are relevant for the observers of the global economy.

For instance, what is the IMF’s prognosis about the Covid-19 pandemic? How long will it last? And what are the global growth prospects?

Contrary to what happened in India’s case — where the IMF doubled the rate of GDP contraction since WEO’s June update — globally, the picture has become better.

“The baseline projection assumes that social distancing will continue into 2021 but will subsequently fade over time as vaccine coverage expands and therapies improve. Local transmission is assumed to be brought to low levels everywhere by the end of 2022,” stated the IMF report.

Of course, the IMF has also provided the other scenarios when things turn out better or worse than the baseline expectation.

In the first alternative — the downside — “containing the virus proves to be a more difficult and protracted struggle until a vaccine is widely available”. In the second alternative — the upside — “it is assumed that all dimensions of the fight against the virus go well”. 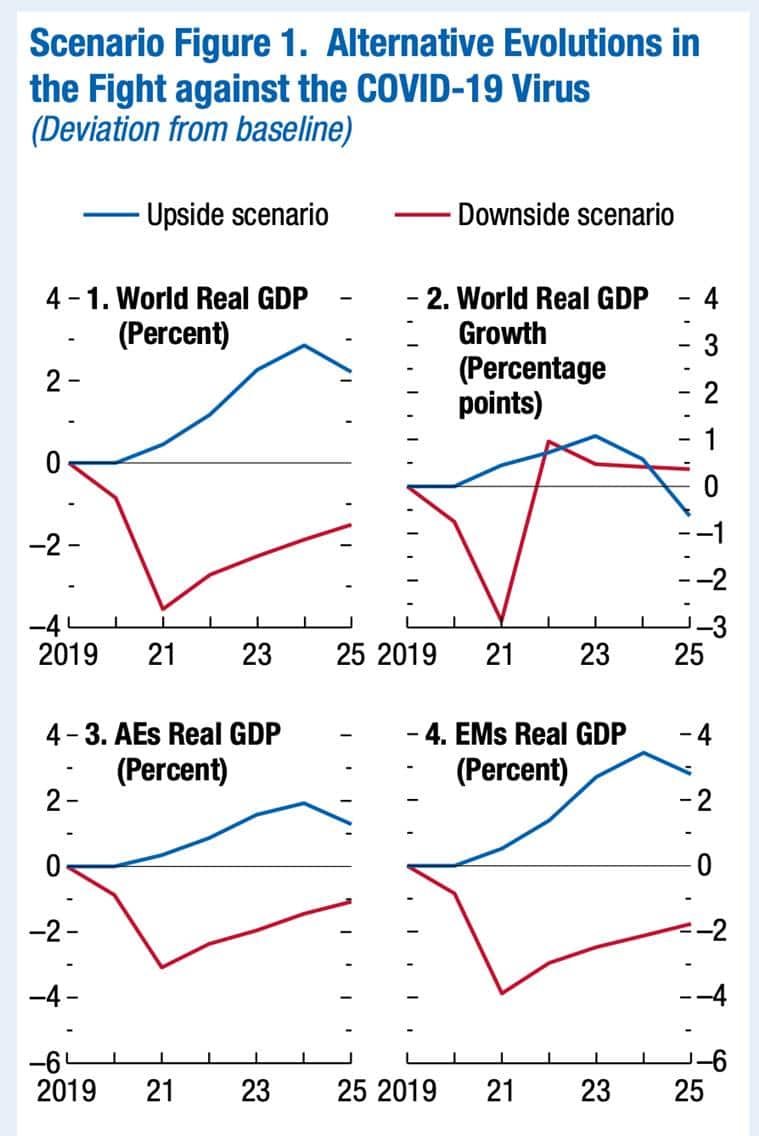 Alternative evolutions in the fight against covid-19

For instance, in the downside scenario, the real GDP growth rate (see the second of the four sub-charts) in 2021 would be almost 3 percentage points worse than the 5.2 per cent growth. In other words, it might be just a global growth rate of 2.2 per cent in 2021.

Lastly, here are the three more worrying takeaways from the latest WEO update.

One, poverty is set to increase.

“The pandemic will reverse the progress made since the 1990s in reducing global poverty” and “close to 90 million people could fall below the $1.90 a day income threshold of extreme deprivation,” states the IMF.

“The pandemic is having particularly adverse effects on economically more vulnerable people, including younger workers and women. The burden of the crisis has fallen unevenly across sectors”.

It is crucial to note that while global poverty had declined since the early 1990s, income inequality had increased (see charts below) in most countries. The pandemic will make this further worse. Change in income inequality since 1990

Lastly, human capital accumulation will be set back.

IMF cites UNESCO (2020), which, in turn, estimates that more than 1.6 billion learners worldwide have been affected by school and university closures. And “because many schools provide free or subsidized meals to children from low-income households, closures may result in greater food insecurity and poorer nutrition for children from those homes”.

So policymakers have to deal with “more poverty, higher inequality, and severe setbacks to human capital accumulation” as they chart out their next course of action. And, lest we forget, policymakers have to find solutions even as debt levels continue to soar, thanks to falling government revenues and rising expenditures.

All these challenges are amplified in India’s case since, as shown yet again, it is one of the worst-off.

Shahana Goswami on A Suitable Boy: I was constantly in a state of awe on the set